Resident Evil 2: The Board Game review 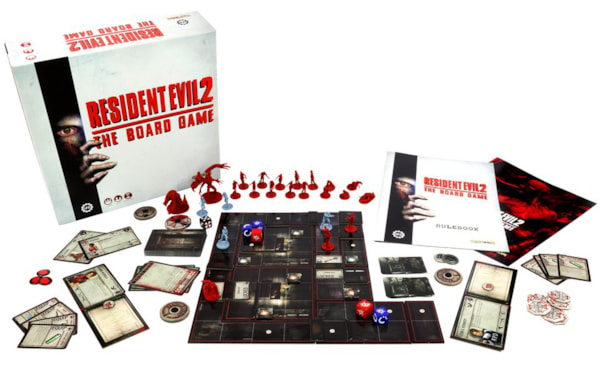 A dungeon-crawling throwback with a bit of bite

Arriving within a zombie’s grasp of the digital remake of seminal horror video game Resident Evil 2, which brings modern graphics and updated gameplay to the 1998 PlayStation classic, its board game counterpart is instead a thoroughly old-school experience.

Resident Evil 2: The Board Game is largely a familiar affair – a dice-chucking dungeon-crawler packed with zombies, where the players try to make it through varying environments with their brains uneaten. Its gameplay is a variation of what’s come before, with simple rolls to attack and evade, the ability to collect helpful equipment from around the map, and the need to deal with undead enemies who gradually shuffle their way towards the living in response to noise.

It’s a time-tested design, and it works just fine. Where Resident Evil 2 does manage to successfully stand out is in its devotion to its source material. Unlike the trigger-happy combat of many dungeon-crawlers, and in keeping with the video game, ammo is a premium. You begin each level with a limited number of shots, handily tracked using dials specific to each gun, and spending ammo unnecessarily can quickly land you in trouble. It can be frustrating when landing a hit with even the trusty close-quarters combat knife comes down to a lucky roll, but the tension of regularly having to get up close and risk being bitten to preserve your precious bullets works well.

A deck of tension cards drawn at the end of each turn does a decent job of introducing random events, as well as doubling as a timer to stop each scenario dragging on. The deck can be reset a limited number of times by bringing an ink ribbon to one of the typewriters dotted around the levels – a nice nod to the video game’s iconic way of saving, and a smart way of forcing players to consider how they spend each turn.

The game is best tackled in its campaign mode, a series of scenarios that loosely mirror the plot of the PlayStation game. More fearsome enemies are controlled with a version of the boss deck system used in Dark Souls: The Board Game, giving them a wider array of attacks than pistol fodder and a video game-like pattern to their actions that marks such encounters out as the rewarding showdowns they ought to be.

While the scenarios can be tackled as individual missions, having your health, ammo count and weapons carry across between each level gives a greater sense of the survival-horror feel to the overall game. With only eight missions (the first is essentially a brief tutorial) and no branching narrative, it’s not a particularly long or deep campaign, but there’s enough variety in the objectives and level layouts to keep things interesting throughout. Certain items picked up in earlier scenarios will potentially grant benefits in later missions, inviting exploration rather than A-to-B mainlining of the current goal.

While the presentation of most of the game gloriously embraces the dated look of Resident Evil 2 without sacrificing clarity, its environments are a major disappointment. The room and corridor tiles try to use shadow and limited lighting to evoke creepy horror but end up losing almost all personality or distinction in an overly dark, hard-to-see mess. Worse still are the door tiles, which are so murky it’s hard to make out when doors are open or closed at a glance – a key consideration when considering which zombies an action might attract. Worst of all are the wall pieces used to break line of sight and movement, which are little more than thin black streaks of cardboard: the kind of thing you might accidentally throw away when popping out the punchboards.

Despite these notable flaws, there is an old-school sensibility and simplicity to Resident Evil 2’s gameplay that suits this tribute to a 20-year-old video game down to the ground. It’s probably an experience best reserved for fans, but those who know what to expect won’t come away disappointed.

The environments are a bit drab and the few original gameplay touches to an otherwise familiar template are more reverent than revolutionary. That said, there’s a certain charm to Resident Evil 2’s old-school feel that means there’s plenty of fun to be found by fans.