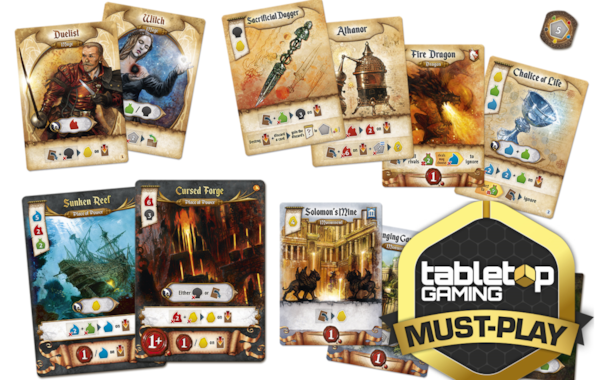 Res for the Galaxy

Games about battling spellcasters are speckled across the modern history of the hobby, from pioneers like Warlock and Wiz-War to heavy hitters like Magic: The Gathering and recent contenders like Mage Wars Arena. And yet there are new things to be done with the idea of gathering magical energy and summoning stuff with it.

Res Arcana is from Tom Lehmann, the mind behind Race for the Galaxy, and, while this is not the same game or even a sibling of it, it shares the same DNA.

They’re both tight, intelligent games where you build a tableau of cards, with their own language of symbols you’ll have to learn, and both reveal their tactical richness the more you play and understand them.

Opening up the box, the first impression is of elegance. Everything has its place: the essence tokens are in a five-sided holder that lifts out, all the components have room to breathe and both the art and graphic design are beautifully in tune with the theme. Second impression: there really isn’t very much in the box. That doesn’t mean there isn’t much to the game.

Everyone is a mage, each with a special power and a hand of eight artefact cards – three up and five down. That’s your lot. There’s a nice system of pre-built decks for novice players, and a drafting option. But still, those eight cards are all you’re going to get for the whole game. Your job is to manipulate them, along with spells, to gather resources to unlock your other cards, to gather the gold needed to buy monuments and ‘places of power’, which are the main sources of the ten victory points you need to win.

This is, you’ve probably gathered, not a wham-bam battle of mages, but an altogether more subtle affair. You’re building an engine, but it’s a very small and finely engineered engine – more of a Swiss watch movement than the great terraforming machines of some other games – and it must be built with delicacy and care because every point is crucial.

Res Arcana has obvious overlaps with other Tom Lehmann games, and other mage-fighting games – the five essences have more than a numerical resemblance to Magic's mana – but tonally it’s a thing apart. This is so stripped down, the cards so finely balanced and the sense of increasing power so real as you muster your cards and your understanding of their language and the way they relate to each other grows. It’s engaging, satisfying and encourages you to want to master it.

And then there are the dragons. You can forego the obvious point race to victory and spend your essences on monsters instead, and the monsters will royally screw up your opponents’ plans. This is the cherry on Res Arcana’s cake, bringing the inter-player fire that many engine-builders lack. They don’t end the game, but their appearance alters its direction.

It’s a masterclass in elegant game design, and an antidote to all those games that cover the table and fill your brain with fiddly details. Despite the small number of cards, it’s not a game that gives up its secrets quickly, and I feel I’ve only begun to explore it. Thankfully once you’ve mastered the rules it zips along at a good pace; you can easily get in two or three games in an evening, and I won’t be surprised if you do.

Theydies and gentlethems, please welcome Sand Castle Games to the international stage. This is a seriously impressive first release from a new publisher. Expect it to be on awards shortlists soon.