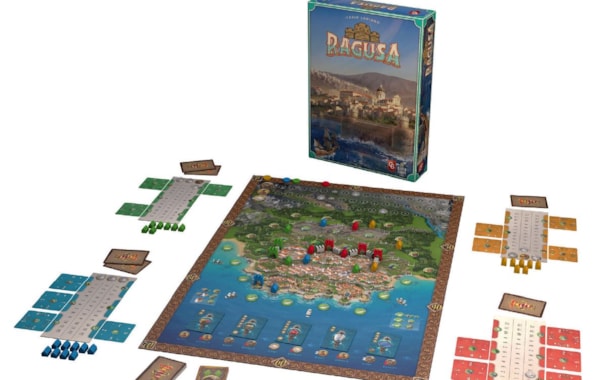 We built this city on rocks and, um, fish

Mediterranean trading, you say? Worker placement, is it? At a glance, Fabio Lopiano’s Ragusa is yet another standard-issue Eurogame, complete with quaint wooden components, an attractive VP track-framed board and a gently historical theme – in this case building and bartering in 15th-century Dubrovnik. But, similar to Lopiano’s last offering, Calimala, it offers a rather neat mechanical twist.

Each player starts with a set of buildings, their number determined by the player count. Each turn, one of these buildings is placed in one of six sites located around the perimeter of a hex on the board map, with each hex granting a particular action. It might simply reward a resource, such as wood, stone, olives, grapes and fish (which for some reason can substitute any other resource, if you have enough of them). Or it might be one of several urban districts, such as the market, which allows you to trade with a visiting merchant ship, or the mason, which enables you to place a section of city wall (the aim being to own the longest stretch of wall for extra VP at the game’s end).

Many of these districts allow every house that surrounds it to use its action when a new building is placed there, in clockwise order. If any of those other houses is your own, then you can multiply your gains. If they belong to other players then they, in turn, also get to take the action. It’s a smart way to keep player engagement maximal throughout every round, with downtime virtually non-existent. Not only that, but every time a building is placed, it also triggers the actions of the two other hexes it adjoins, creating a wide variety of effects and encouraging even deeper strategic attention. Plus, if any of these hexes is one of those aforementioned urban districts, any other buildings on those will also be triggered.

After a simple, resource-gathering start, then, the game quickly complicates into a series of cascading action effects. The downside of this is it becomes tough to track what exactly is happening where and to whom, especially as every building placement comes at a resource cost, which it’s all too easy to forget about amid all the who/where/what calculations – especially at high player counts. On the flip side, it is rather less engrossing as a two-player game, while the solo version rather inelegantly requires two dummy players to manage. Clearly, like Catanand Calimala for that matter this is truly a three-to-five-player title, with the one- and two-player modes merely bolted-on variants.

Also, despite the ingenuity of its mechanisms, it does lack personality and a sense of drama. Despite its interesting historical context, the theme feels rather vanilla, with no character based human factor to latch onto, while it would have benefitted from
some form of take-that interaction, like the subversive chicanery allowed by other city-builders, such as Lords of Waterdeep or Citadels. Still, if you like your games to be more puzzly and point-crunchy than theme-y, then Ragusa is certainly worth a visit.