This is Bruno Cathala’s second gardening game of the year. We reviewed Ishtar a couple of months back as an extremely tight tile layer about making the desert bloom. This is a similar affair. Players play as ‘famous beekeepers’ (according to the box) and as such they are trying to create a garden which scores them the most bee points.

While not exactly Wingspan in terms of habitat building – you’re just picking flowers from the row that the gardener is currently on, and strategically placing hives – it’s still satisfyingly personal to you. You take turns picking flowers, with a few restrictions – you can’t pick three of the same colour, but you can pick two matching orchids. Once this is done they go into your personal supply, and the gardener is moved on equal to the number of orchids picked.

The other action you can take, when you have enough orchids to fill a tile, is to take one of the Tetris-ish tiles and place it front of you. Score points for matching colours, and if, you’ve used a hive for one space, think about the placement of bee-encrusted flowers. At the end of the game you’ll score points for the number of bees around a hive. Diversify your production, which is probably the least sexy way of describing having a complete set of different honey flowers in front of you, and you get some end game points.

A lot of ‘group solitaire’ games don’t have strong interactions. And while there’s no conflict here, you can keep an eye on your bee-bothering counterparts and shift on the gardener one more than you imagine they’d like. Equally, you can be smart with your flower and hive placement, and a late-game slotting of a hive into a high scoring area can cause last-minute panic amongst your friends. 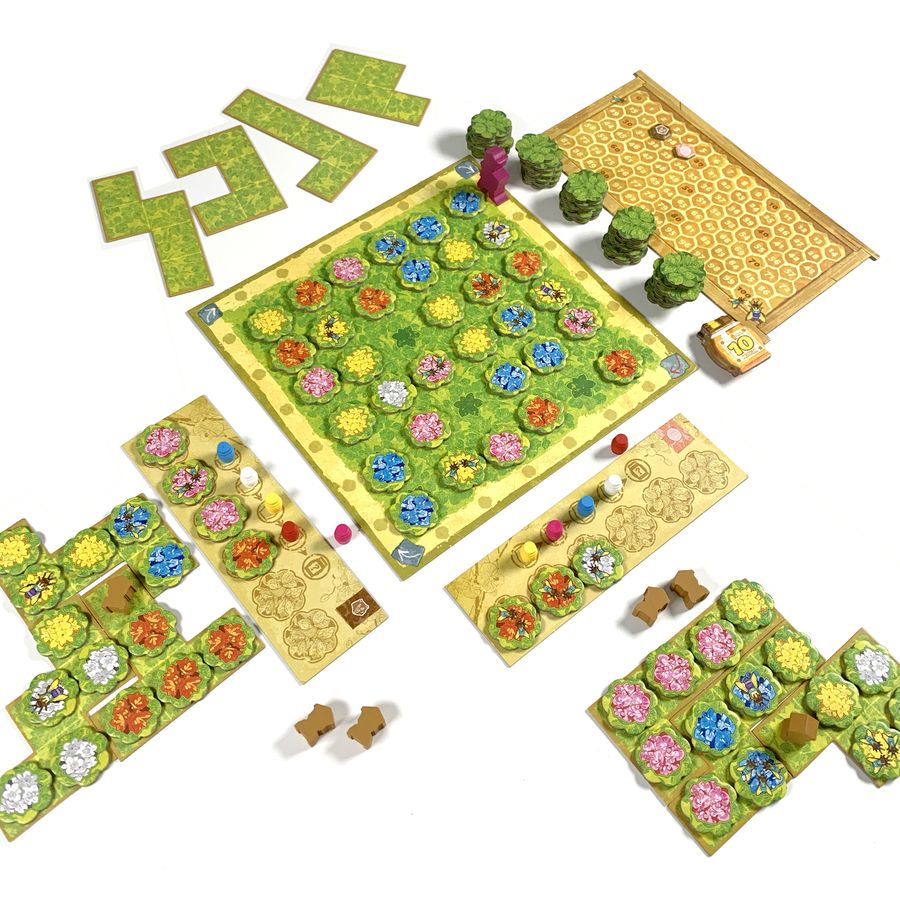 The design is impossibly nice and vaguely psychedelic in its mix of vibrant colours and intricate, natural patterns. The art has a lino-print look about it, which gives it an authentic charm. The making of your own little fiefdom of bees and honey is distinctly pleasurable. And like all games where you want to build an empire, it’s nicer when it’s just yours and there’s not a chance of someone else sneaking in and taking it from you. If we were being uncharitable we could talk about how the lack of interaction leads to a less chatty game. There’s less on the line than in other, similar tile layers too, but it is very hard to make such comments when the game looks this good and is blissfully simple to pick up.

Games can move fast and the eager attention to the board is something that certain types of gamers will enjoy, and the satisfaction of your own garden growing in front of you is undeniable. It’s not the sweetest thing, but it’s very close.

Queenz is a charming tile layer which can best be described as a Carcassonne of one’s own. Elevated by its vivid design and puzzly pieces, this is a tile matcher worth adding to your hive.

Try this if you liked…Ishtar

While the arena isn’t shared and the nuances aren’t as tightly negotiated Queenz has the same feeling of doing-a-nice-thing-for-points.