With its central, circular star cluster board and curving peripheral mats – including a stack of technology boards that trail pleasingly out like the tail of a comet – Pulsar 2849 certainly looks the cosmic-energy-harnessing business. So much so, it’s initially rather overwhelming.

Planetary system tiles, colour-themed interstellar routes, a dice board, pulsar-power-harnessing gyrodynes, modular transmitters, die modifier tokens and tracks for both engineering (which rewards cubes that in turn reward a bonus die) and initiative (aka turn order) – not to mention player-mat HQs with their own pyramidically arranged extra actions – mean the first few plays will need to be approached carefully and with much reference to the rulebook. But once you start rolling (literally, as Pulsar’s driven by dice drafting), you’ll gradually come to appreciate the absorbing theme and fine-tuned balance that lie beneath the pretty-but-bewildering surface.

After a couple of quaintly humorous games (2011’s Last Will and 2015’s The Prodigal’s Club), designer Vladimír Suchý has returned to the more epic territory of his earlier titles, like Shipyard (2009) and 20th Century (2010). Except, for the first time, he’s gone sci-fi rather than historical, pitting players against each other in the galactic equivalent of a gold rush (the date in the title is deliberately a millennium after the famous 1849 Californian scramble for gold). It’s not shiny metal you’re after but interstellar energy generated by pulsars, which you race to reach before your competitors, before constructing immense gyrodynamic generators (or gyrodynes) and setting them spinning. It might help to build a few energy transmission arrays to help distribute this energy to all the planets you’ve discovered and established stations on.

Every possible action (there are tons to choose from, varying from game to game depending on your layout) is determined by the result of a die roll, with seven tossed at the start of each of the game’s eight rounds in a two- to three-player bout and nine with four people. You can only select two dice each per round (plus possible bonus dice, whose value you quickly come to appreciate), so you have to think extra carefully about those choices.

Suchý rather smartly adds another level of decision-making; with a median value attached to each round’s roll, picking a low number provides you with a mitigating bonus move up one of the two aforementioned tracks. For example, taking a one could push you into pole position for receiving enough engineering cubes to purchase a high-numbered bonus die on a future turn. In contrast, going for a sweet high number moves you back, with possible penalties to your victory point tally at the end of each round.

Like all good Euros there are multiple routes to victory and minimal take-thatiness. Even if someone snatches a die you were craving, you have many other options; and besides, you’ll likely have a handy modifier token you can use.

It’s impressively elegant, and each replay allows whole new strategies to be explored. Like the black hole that sits at the hub of that attractively cornerless board, it will utterly suck you in. 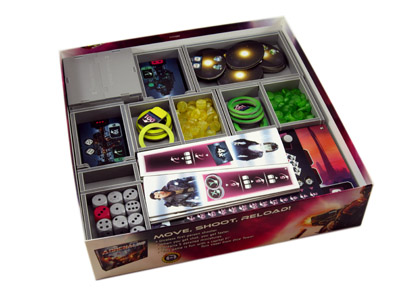