Block block. Who's there?

If part of board games’ edge over video games is their sensory appeal – the fact that when we play around the table it’s not just a visual experience, but one where the clatter of dice, the smell of cards fresh from the pack or the feel of weighted chips all add to our enjoyment, then Tetris-alike abstract Project L seems to be playing to the medium’s strengths.

The box contains various Tetris-block-style pieces, in sizes ranging from one square to the familiar four square shapes you’ve probably dreamt of cascading down an endless screen. They’re brightly coloured, made of hard plastic, and immediately you want to dive in and start sorting them into patterns. Abstract games receive a lot of flack from modern gamers who expect buckets of theme in every title, but such is the ubiquity of Tetris as a cultural phenomenon that it’s as if the theme is ‘imagine if you were playing Tetris’.

From this auspicious start, each player’s task is simple: finish as many puzzles as you can before the end of the game. Each turn, you choose from four actions: grab a puzzle from a communal selection, take a one-square piece from the supply, upgrade one of your pieces to the next size, or place a piece in one of your puzzles. You do that three times per turn, each time either choosing a new action or repeating the same one. Once per turn, you can, as a ‘Master Action’, place a piece from your supply on each of the puzzles in your area.

That’s it – that’s the game in its entirety. As you complete puzzles you place them to one side, potentially earning bonus pieces as well as end game victory points. There’s a deck of easier white puzzles and a deck of harder – but more lucrative – black puzzles that you get to choose your new challenges from. 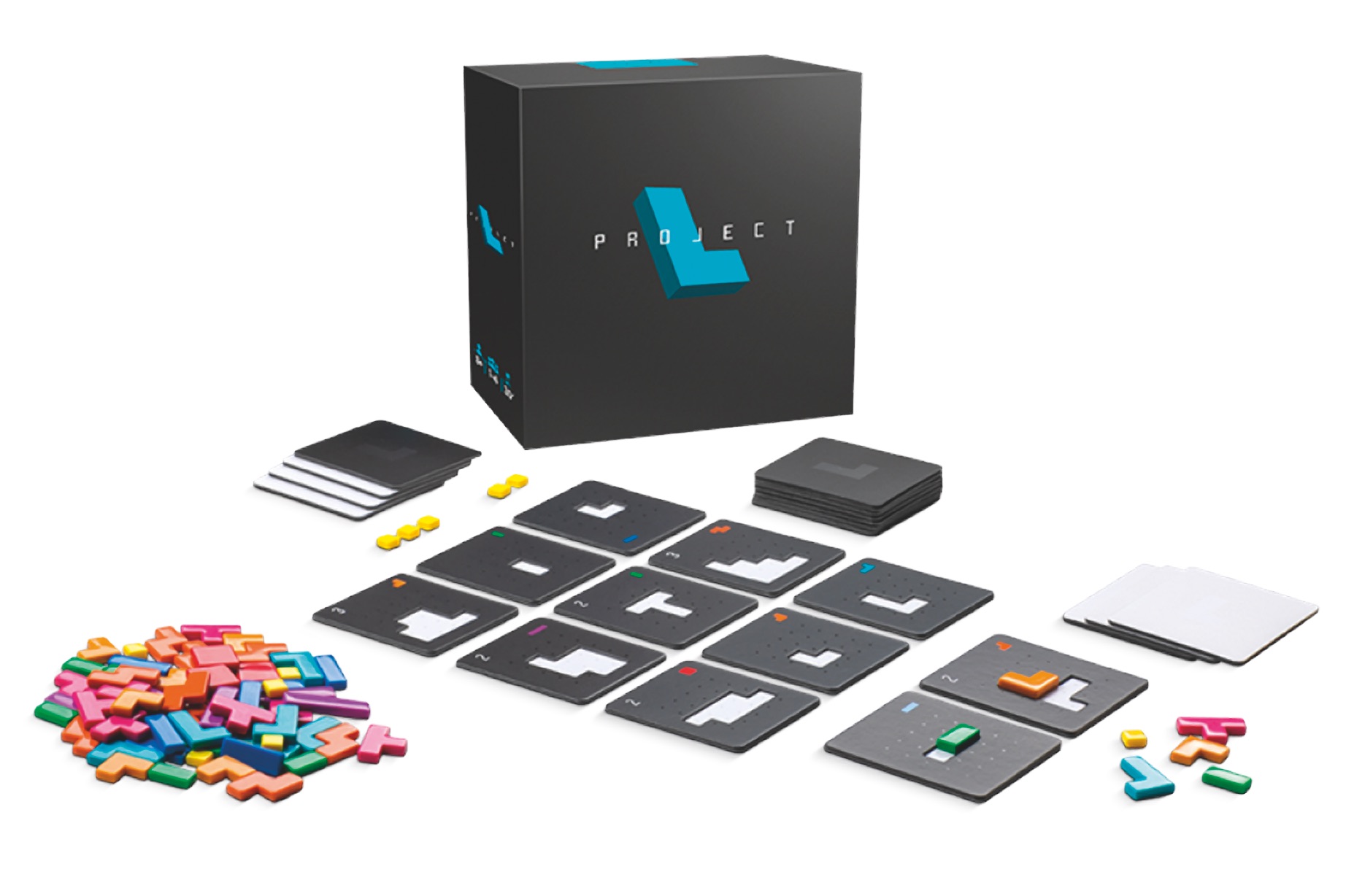 Player interaction is low, beyond an opponent grabbing the puzzle you were eyeing up. But sometimes this is exactly what you want in a game – something where you can all get lost in your own thinky, tessellating brainteasers without having your progress ruined by forces outside your control.

Project L looks appealing and the pieces are satisfying to slide into the recessed shapes of the solid puzzle boards. Even to abstract-sceptic gamers it’s an easy sell when you get it out at the table.

So the key question is: is it any good?

In Tetris, the video game, the challenge comes either from the ever-escalating pace, or from an opponent hurling an extra four lines at you when you can afford it least. Identifying shapes from a tiny selection then slotting them into the appropriate gaps becomes wonderfully, agonisingly difficult when you face a time constraint or an antagonist.

Project L offers neither. Fitting plastic shapes into fairly basic puzzle templates, as satisfying as it sounds, as satisfying as you’re sure it’s going to be when you and your friends sit down for the first time to play, turns out to be a weirdly underwhelming experience. With neither a deadline nor an enemy tossing banana peels in your path, it can even feel, at times, like drudge work.

There’s some optimisation to be had, in terms of lining up multiple puzzles, grabbing the necessary shapes then using your Master Action to finish all three in a single action. But unlike other games where building towards your one big move might involve risk and lots of moving parts, in Project L you just plod towards it like a campsite you’ve been assured is somewhere down the next road. You know you’ll get there eventually, it’s just a chore.

Given the minimalist but polished production, it’s a shame the game feels so underdeveloped. The basic set up for the solo version even requires more level one pieces than come in the box. Were there frantic simultaneous movement, a time constraint, or meaningful player interaction, the lacklustre nature of the puzzles wouldn’t matter. As it is, Project L is destined to remain at the bottom of the stack.

TRY THIS IF YOU LIKED Cottage Garden

Grab the charming – if somewhat wonkily-scoring – Cottage Garden, or the two-player Patchwork, or pick up literally any of the Azul series of don’t-eat-them-they’re-not-really-sweets puzzlers.