Power Rangers: Heroes of The Grid 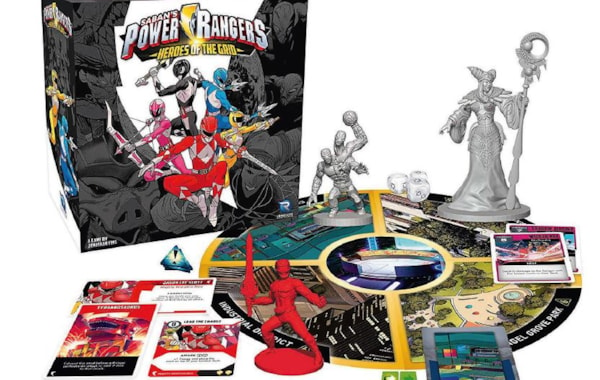 A Megazord of a board game

Buy your copy of Power Rangers: Heroes of The Grid here

Having been burnt before by board games that entice you with nostalgia, I approached Power Rangers: Heroes of a Grid with low expectations. If nothing else, I would probably enjoy the wonderfully detailed miniatures of the rangers and their various adversaries, including Rita Repulsa, Knasty Knight, Pudgy Pig (by far the most glorious) and others, while reminiscing about the series from my childhood.

My initial worry that the game was more about looks than gameplay was dispensed within the span of a single playthrough. Heroes of the Grid assembled a set of interesting and enticing separate parts into a Megazord of a board game.

At its distilled core, Heroes of the Grid is Pandemic in a Power Ranger outfit just switch disease cubes for the Putty Patrol. Yet it is far from being a mere copycat. Some ideas have been simplified for example, condensing the board to five areas, making movement easy but maintaining control of areas harder. If one of the areas becomes overrun with Putty Patrollers it must be cleared as urgently as possible because, once it cascades into adjacent areas, it becomes almost impossible to stop. Once all the areas are overrun and enter a panic state, the game is lost.

It is the ‘clearing’ of these areas that gets a deeper, layered treatment in Heroes of the Grid. Every ranger comes with their own deck of attacks, moves and manoeuvres that they can utilise during the fight. Some cards simply do damage to enemies, while others generate tokens that can be spent on more powerful moves or can otherwise
be used to help other players during each round. Putty Patrollers and monsters also come with their own decks of varying actions. As the attack cards are laid out for the round, players can assess which enemy cards are more dangerous and should be prioritised. The rangers’ remaining health is the size of their deck when the last card runs out, they have been defeated. This means using your most powerful attacks at the beginning of the fight may not be the best strategy, especially as monsters and, eventually, the main boss make their appearance.

Card management becomes key, as players decide if they need to team up to defeat the enemy or if their hand is strong enough to face them alone. Players can always discuss together which enemy attacks need to be throttled and if the rangers can take some damage to save powerful cards in their hand for the next round. The rangers’ decks have just enough variation to make every card draw exciting, but not too much to exhaust players with options and abilities. Each ranger is different which might seem like an obvious statement, but not every game makes such an effort to make its characters stand out. Some rangers’ cards are more attack-focused, while others are better at manoeuvring and generating energy tokens.

During your first game, you’ll be able to learn your deck and begin to use your cards in an informed way, taking advantage of natural combos and figuring out which cards can be discarded and which should be kept in reserve for stronger enemies. While the Putty Patrollers are not as dangerous as they are numerous, if left alone, their cards can combine to deal a significant blow. As the enemies get stronger, so do the rangers. They gain experience by defeating enemies that allows them to unlock Zord cards, and eventually a Megazord card that provides bonus actions during fights.

The Power Rangers theme may have been the initial draw of Heroes of the Grid, but take that away and this is still a great area-control and card-management game in its own right. It presents a tough fight, but with some strategy, a bit of luck and great teamwork, players can give Rita one hell of the headache.

Buy your copy of Power Rangers: Heroes of The Grid here