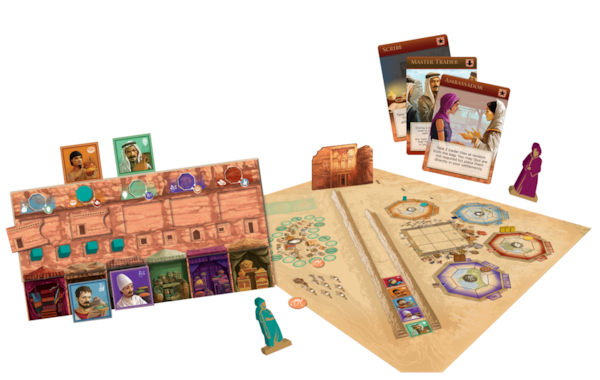 Passing Through Petra certainly makes a statement. With 3D plastic walls that protrude from its board, the game strikingly recreates the Siq – the straight gorge that leads to the ancient city's iconic treasury, here represented by a flat cardboard standee that completes the effective diorama, even if it’s a good deal less impressive than its entrance.

Visual panache aside, the rest of Passing Through Petra’s board also excites. There’s a three-by-three grid on which players move pawns, the direction in which they move dictating which of the four core actions they perform. It’s an innovative and intriguing take on action selection, with the opportunity to perform some actions twice or find yourself accidentally hemmed into a corner – and therefore unable to do half of the actions that turn – offering up some interesting decisions and the need to plan ahead.

The actions feed into the main loop of acquiring multicoloured tiles from the Siq – or the more open plaza at the end of the gorge – to add to your personal board, where they push their way into a line of tiles one end, squeezing out tiles the other. Build up enough in a column above your board and they can be combined with another colour in the row underneath to propel your marker around one of the four tracks on the board, scoring points (here simplified as placing your nine cubes fastest to win) and gaining various other bonuses as you go.

It sounds promising, and it is – to a point. The payoff of lining up scoring combos between your columns and rows is rewarding, and the grid-based action selection is straightforward but thinky enough to throw up some tricky situations.

The problem is that, like the four markers that continually circle the same scoring tracks, turns end up feeling very samey. Being able to gain secret objectives for extra ways to score and villager cards with abilities that spice up the standard collect-squeeze-combo helps to avoid total monotony, but – depending on which tiles are drawn from the bag to fill the Siq – it’s easy to repeat the same set of actions turn after turn and score big. The action-selection grid and tile-pushing quirks are curious enough to provide a few rounds of fun, but they don’t do enough to keep the hooks in for an entire hour-ish playthrough.

At other points, the tight loop of working toward combos and objectives can fall apart completely. In one extreme case, one of our players happened to draw an ability card that gave them the chance to move a whopping 30 spaces in a single turn with no chance for the other players to stop them, letting them place half of the cubes needed to win in one move. It was complete luck, and left the rest of the group feeling more than a bit miffed. Adding to the issue is the ability to place unlimited cubes on a single scoring track, removing the need to balance which colour you focus on – in one game, none of our players progressed from the starting spot on one of the tracks.

There are absolutely things to admire in J. Alex Kevern’s solid design and its eye-catching presentation, but Passing Through Petra ends up wearing out its welcome. Like passing through the rocky walls of its namesake, it’s fascinating to observe at first – but spend too much time in its midst and your enjoyment might start to erode.

Not a bad experience by any stretch, Passing Through Petra is a clever design that falls short of being something special. All the elements are here – original gameplay, easy rules, striking visuals – but it’s hard to escape the feeling of repetition that ends up wearing down its impressive aspects.