Before electric lighting the streets of the world were either dark, or lit by a sickly gaslight.When Paris was shocked into life with electric lights it became a marvel of the world, painters flocked to paint the city in a way that was, before, more or less impossible.

As such Paris la Cité de la Lumière is one of the prettiest games we’ve come across recently. The two-player game is played in a diminutive box where you lay out tiles so you can later lay buildings on your colour, and more importantly set out the streetlamps. The buildings are Tetris-shaped double-depth cards which you can choose to pick up on your turn in the first round instead of laying cobbles. Once collected they’re stored until the second phase where you lay out buildings in an attempt to set up the city to light up your own buildings. Place a lovely chimney meeple to say it’s yours, and you’re done. Unless you’re activating one of the stunning action postcards around the board. These give you little bonuses, like adding in a painter, or an annex to a building, both of which may help you score points. An action can only be used once by one person, so choosing wisely is important. 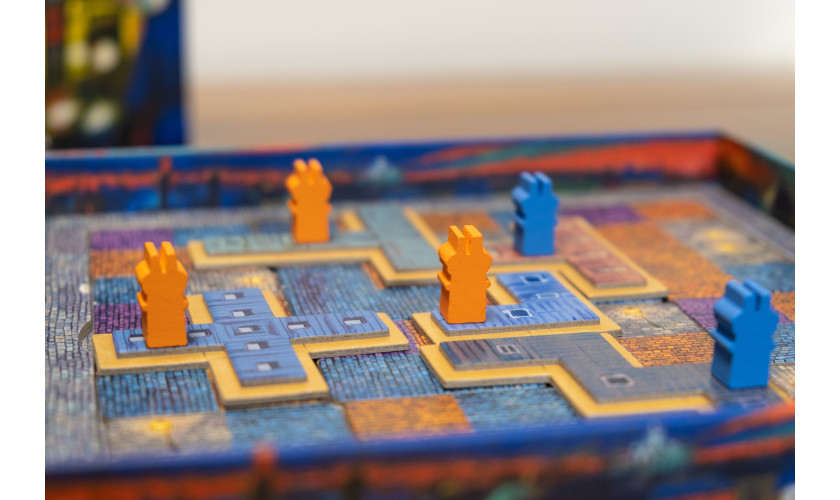 Like all games with building, the most important part is that you feel good with what you have at the end. And you do – a little night time diorama of a city appears between the two players, and that’s more or less enough. There is a sense of strategy in getting the right pieces, and laying your initial tiles effectively, and a few games in you’re planning well ahead to block your counterpart and not be left with anything that will cost you points at the end of the game.

A lush, puzzly little game that will leave you happy you only had one person round for games night.