How many points for a bird in the hand?

Papageno is not, as you might think from the title and cover art, a new Pokémon or a licensed character from a kids’ cartoon show. This is a game based on the comedic bird-catcher from Mozart’s 1791 opera The Magic Flute, proving that the Swiss have different ideas about what young people are looking for in popular entertainment these days.

The game has fifty cards. Forty of them are birds, numbered from -2 to 9, and the remainder are Specials – pan pipes, eggs, and Papageno himself. The cards are very pretty, half-width with stylised geometric art of the birds and objects, each perched on a wire that runs across each one. This is the last bit of praise I’m going to give this game.

Each player starts with a hand of six cards which they look at and arrange into a 3x2 grid, face down. On your turn you take a card from the draw deck or discard pile and exchange it for one of the cards in your tableau, placing the new one face-up. The object is to collect only the lightest (lowest-scoring) birds in your tableau. The round ends when any player has all six cards in front of them face-up: lowest score wins the round; first player to win two rounds wins the game.

If this sounds familiar it probably is. Papageno lifts most of its structure from the traditional card-game known as Golf, or sometimes Polish Polka, which is usually played with a regular deck of 52 cards. Even the quirkier parts of the scoring system are virtually unchanged – if your grid has two cards of the same value in the same column then they score zero, and in Golf the 2 card scores -2, the same as the lightest bird here. 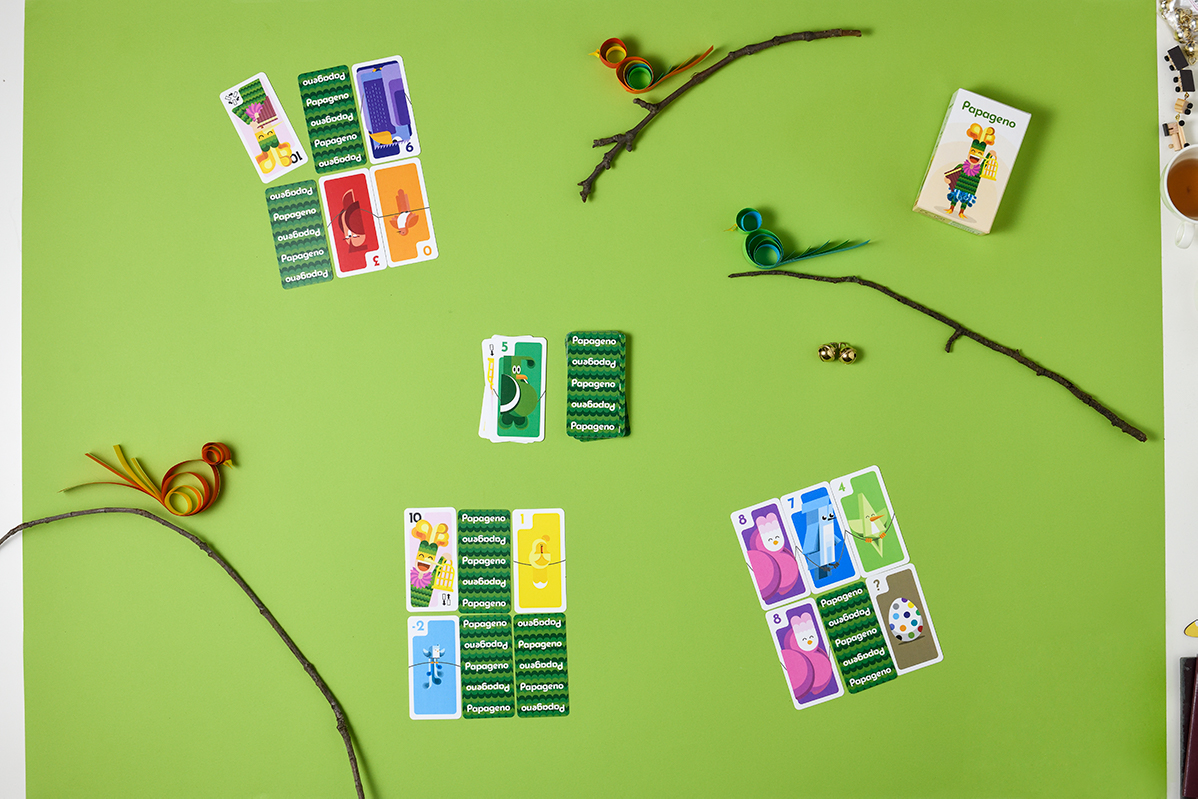 The only differences between Papageno and Golf lie in the special cards and the end condition. Papageno (worth ten unwelcome points) lets you capture one card from an opponent’s tableau, swapping it for one of your own. The pan-pipes (also ten) make birds dance around: pass your discard to your left neighbour, who must swap it with their card in the same position in their grid and pass their discard on, and so on. And the eggs take the value of the card to their left or right.

Let’s stop for a moment and talk about eggs. They’re useful if you can align them next to a low-value card (assuming that you can remember which of your face-down cards are which – the pleasures of a simple memory game like this are overrated – and another player doesn’t either capture it or land a weighty bird next to it). But there are only two eggs in the whole deck, so like the blanks in Scrabble they’re so rare they’re potentially unbalancing: good luck to players who get one and tough to the others.

That in a nutshell is the problem with Papageno: too much randomness, too little chance for strategy. A game that might be a pleasant diversion with a regular pack of cards leaves a bitter taste in the mouth when you’ve dropped a tenner on it. The special cards add variation and inter-player rivalry, but take away from the simplicity and speed of the original, and like the eggs they’re so infrequent that if your beautiful layout is ruined by one, your chances of retaliation are slim.

Golf variants have a strange fascination for designers: Bézier Games alone has four (the Silver series, plus Cabo). Perhaps it’s time to leave it alone for a while?

If you’ve never played Golf then this could be a pretty introduction. Or you could use a regular deck of cards.

TRY THIS IF YOU LIKED Silver…

Silver adds werewolves (it’s Bézier Games, of course it does) and not seeing your face-down cards. Papageno is an easier version to learn and play.