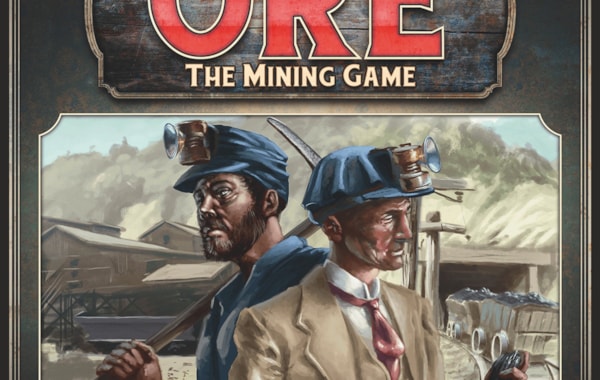 It gives us no end of punny pleasure to announce that Ore: The Mining Game is a worker-placement title that comes with a little added depth. Set at the turn of the 20th century in the mineral-rich Appalachians, it casts its players as mining company bosses competing to meet the demand for coal and metals as cities like New York and Chicago embark on ambitious building projects that reach for the skies.

You’ll need to direct your meeple-shaped workforce to fulfil contracts, obtain building permits, and recruit new help as you start delving beneath the ground in search of lead, coal, iron, copper and gold.

For the most part, Ore is exactly what you expect and need from a decent worker-placement game: taking turns to plonk meeples on action spots, triggering immediate returns, while ideally progressing a particular short-term strategy and blocking the other players from doing the same thing – perhaps even forcing them to rethink their own plans.

But where it gets interesting – and challenging – is in the way it applies the mechanism to mining itself. Each ore has its own deck of mine cards, which are put out one at a time until a mine is exhausted. When you place a worker in a slot on a mine card (usually the top one, unless you’ve got a drill bit token to spend) your worker is now committed to delving for several turns. This grants increased rewards, in terms of reaping a particular kind of resource – and resources are needed to fulfil contracts (which must have an order row fulfilled at the end of a round or you’ll lose them) in return for VPs, money and the chance to construct any buildings you might have permits for (in return for further VPs and other benefits.) However, it also thins out your meeple ranks. If you focus too much on mining, you won’t be able to achieve much else – though it is possible to extract a miner before they’re done at a cost.

How deep you can go also depends on whether or not you’ve invested in a mine cage, which can only send you to the deepest, richest depths after an upgrade. So you have to think very carefully about where you focus your workers’ efforts, with diversity of activity being the best guarantee of success.

Ore is clearly a labour of love for designers Joe McClintock and Jason Lyle Steingisser, who worked on it for seven years. Similar to Lords of Waterdeep, it is easy to recommend as an introduction to the worker-placement genre, with a straightforward theme and no need felt to mix it up with other mechanisms. As such, it might feel like it’s arrived seven years too late for some gamers, maybe a bit behind the ‘Hotness’ curve. But its pit-digging mechanism, while somewhat sanitised (there’s no sense of danger to your workers’ health or safety as they tunnel deeper), offers enough of a twist to keep you engaged, and anyone with a soft spot for the genre is bound to dig it.

A solid entry to the worker-placement genre, which offers an enjoyable gateway to anyone interested in delving into the much-loved mechanism.

TRY THIS IF YOU LIKED LORDS OF WATERDEEP…