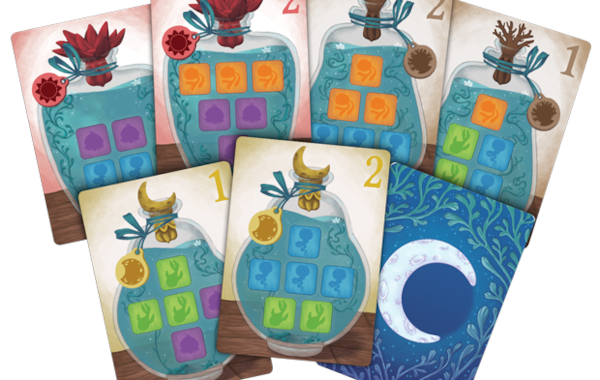 New Zealand-based designer Shem Phillips is best known for his eye-catching, historical-themed games, like his North Sea and West Kingdom trilogies. But Noctiluca reveals a different side to Phillips – a gentler, quieter side.

The theme casts players as jungle divers who travel to remote pools and compete to fill jars with tiny, bioluminescent creatures called noctiluca scintillans that light up the warm waters like a Christmas tree whenever the sun falls and the temperature’s right. However, this idyllic, exotic theme is thinly – and pleasingly – veiled over a nifty abstract game where each variety of noctiluca is represented by Sagrada-like gem dice of a particular colour, which players harvest and place on cards in specific configurations to earn points.

It is a swift, smooth game of two halves, where the pool-representing board is refilled after the first bout of diving and play switches from clockwise to counterclockwise (a change which has significant tactical relevance). The strategy is bubble-light and its rules can be explained in a couple of minutes. But it is a compelling and absorbing game, from artist Bree Lindsoe’s attractive designs (each of these wee dinoflagellates looking like a particularly cute Pokémon) to Phillips’ knack for making a simple little mechanism go a long way.

After the board is ‘seeded’ with randomly-placed dice (four each on the pool’s inner circle of hexes, five each on the outer), each player takes turns to place one of their pawns on an unoccupied shore. From here they can trace a straight line in two different directions: one way will take three hexes, the other four, before you hit the opposite shore. They then choose a number between one and six and pick up every die which shows that number along that line – no matter what colour it is. Of these dice, as many as possible should be placed on any free matching colour slots on that player’s jar cards. Any that can’t be placed are passed to the next player (on the left if it’s the first half of the game, on the right if it’s the second). This player may take one and place it on their card, then continue passing the dice around, with each player doing the same until no more dice can be placed. Then it’s the next player’s turn, and play continues until all the shores (of which there are 12) are taken, in which case the second half kicks off, or the game ends.

There is no attacking in Noctiluca. Smart players will choose numbers that yield nothing for their fellow divers, while the harshest move you can pull is taking a new jar card from the face-up piles on offer that you know another player might need. After all, each player has a secret favoured noctiluca that will earn them bonus points, and as there are only four kinds of the single-celled blighters it’s quite easy to figure out which ones your opponents are aiming for.

It is a mellow Euro through and through, ideally positioned as a family experience or a gateway to the hobby, and it comes with a decent one-player mode, too, if you ever fancy a solo swim. There might not be enough to it for some players’ tastes – and colourblind players will find it tough – but if you don’t mind your games being a quick dip rather than a deep dive, Noctiluca is well worth the plunge.

A smooth, gentle and colourful light-strategy dice-drafting game that lives up to Phillips’ reputation for smart, attractive design – even if it’s a world away from his North Sea and West Kingdom titles.