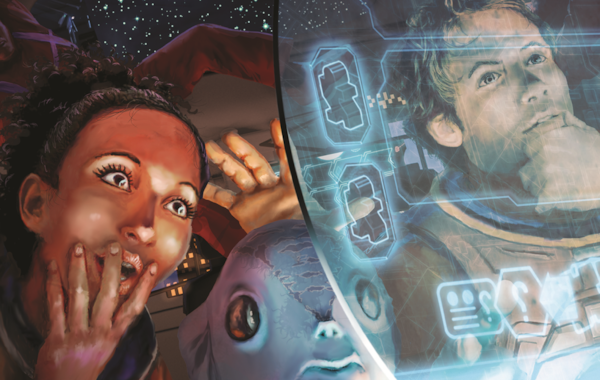 Can the board game keep pace in the Race for the Galaxy?

In 2007, science-fiction card game Race for the Galaxy gave players the chance to colonise worlds and build mighty interstellar empires.

At its core was an idea borrowed from the 2002 release Puerto Rico: whenever a player took an action, such as exploring a sector of space or dispatching settlers to populate planets, their opponents all had the opportunity to do a slightly less powerful version of the same thing. It was a neat way to ensure that everyone around the table stayed engaged, even during opponents’ turns, and opened up all sorts of interesting tactical decisions as players sought opportunities to establish the slightest edge over their rivals.

Dice-based follow-up Roll for the Galaxy revisited the concept in 2014, while 2017’s Jump Drive served as a bite-sized introduction to Race. Now the series has grown once again with the release of New Frontiers, which adapts the original concept into a full-fledged board game.

It’s a convoluted lineage, but anyone who’s played Race for the Galaxy will find elements of this latest release instantly familiar. Each player starts the game in command of a randomly allocated faction, all with their own economic, scientific or military strengths. On your turn you’ll choose from a set of available actions, discovering new planets, harvesting resources, trading goods for credits and otherwise furthering your ambitions as a spacefaring power.

Along the way you’ll also acquire new technological, social and military developments, gaining new abilities and ways to boost your score. It means that with each passing round your civilisation will develop an increasingly distinct character, and your tactics steadily diverge from your opponents’ until you’re all pursuing your own very different paths to galactic domination.

It’s an exciting premise, but New Frontiers never manages to escape a dry, mechanical feel that prevents it ever delivering on its promise of a grand-scale space opera. As you add new worlds to your dominion, it’s hard to see beyond the pure maths of trade goods, credits and victory points. There’s no compelling sense of setting or story to draw you in and keep you invested on an emotional level.

Then there’s the fact that certain aspects of the game just feel clunky, particularly its system for space exploration, which sees players drafting sets of planet tiles pulled at random from a fabric bag. Each planet offers different benefits to its controller, but it means that what’s otherwise a fairly fast-flowing game is punctuated by lengthy pauses while players mull over their available options.

New Frontiers does come with some variable setup options as well as an advanced mode that hands players private goals to pursue as well as the ones available to everyone around the table. But it’s not enough to overcome the fact that other recent games do similar things, and do them better. If you’re looking for thoughtful engine-building, the dreamlike Imaginarium combines rich, deep decisions with an inventive theme and infinitely better presentation. And if you’re after another Puerto Rico-style puzzle, Skylands has a fresher take on the formula.

New Frontiers comes with a collection of interesting strategies for science-fiction empire-building, but it does little to distinguish itself from other games competing for your attention. Its presentation is good, not great. Its mechanical core is fine, but derivative. And its card-drafting space exploration makes for a disjointed pace. It’s not that it’s bad, but it does absolutely nothing to justify its considerable price tag.