You are rudely awoken from hypersleep. There’s a body on the floor nearby: one of your crewmates, horrifically mauled. And something nasty is lurking in the shadowy corridors, rooms and ducts of your big, echoey spaceship.

It’s a familiar scenario. Reminiscent, of course, of Ridley Scott’s Alien, to which Awaken Realms’ latest, big-box, miniature-packed theme-driven game owes a great debt. But it might also ring bells to anyone who played the recent Lifeform, which also translated its reverence for xenomorphy cinema into an elaborate tabletop survival horror.

The core difference between Nemesis and Lifeform is here no player has to take the role of the alien. Or rather, aliens; there is far more than one slimy interloper. Yet this is not a straight cooperative game. Each character — captain, pilot, scout or scientist, among others — starts with a pair of secret objectives. One of these is personal, and the other corporate. The first time an extra-terrestrial Intruder appears on the board (usually as the result of making too much noise while exploring the board), every player has to choose which objective to commit to. Some will require a more ‘heroic’ route. Others demand some skulduggery: perhaps trying to sneak an egg off the ship, or even arranging for another character to have a little, shall we say, accident.

This Battlestar Galactica-ish twist ramps up the tension to a thoroughly entertaining degree. You all need to work together to survive — following your crewmates into rooms doesn’t generate noise, for instance — and each character has its own strengths, represented by their own deck of 10 action cards. But you also never know if you can entirely trust your friends. They tell you they’ve fixed the engines… But maybe they’ve secretly sabotaged them. Perhaps they’ve programmed the ship to return to the safety of Earth… But really set the coordinates to Mars. Meanwhile, those terrifyingly toothy monsters keep springing out at you, gradually whittling down your health and resources, while the ship itself is on an automatic countdown to lightspeed, which will kill all humans on board unless they get themselves back into hibernation first.

Designer Adam Kwapinski (Lords of Hellas) has calibrated the game with a powerful narrative drive, delivering twists, turns, intrigue and climactic moments. Whether you’re playing the game’s superb solo mode (for the ultimate against-the-odds survival experience), or the regular multiplayer, it really does feel cinematic — something that’s helped by publisher Awaken Realms lavishing its usual attention on the components, which are of incredible quality.

However, with a tricky-to-navigate 28-page rule book and heavyweight complexity, games do run slow, long and not always smoothly. Also, there is player elimination, with only the first player out given the option of taking over control of the Intruders. And you don’t have to die to be out of the game: if you swiftly complete your objective and place yourself in hibernation or an escape pod, you’ll have to sit out until everyone else is done, too. This is unfortunate, for sure, although it may come as some relief to hear that, with the game’s action-horror theme oozing through so effectively, even being reduced to a spectator doesn’t take as much away from the experience as you might fear.

It’s knotty, lengthy and involves player elimination, but Nemesis is still hugely impressive in the way it implements its sci-ﬁ survival-horror theme. 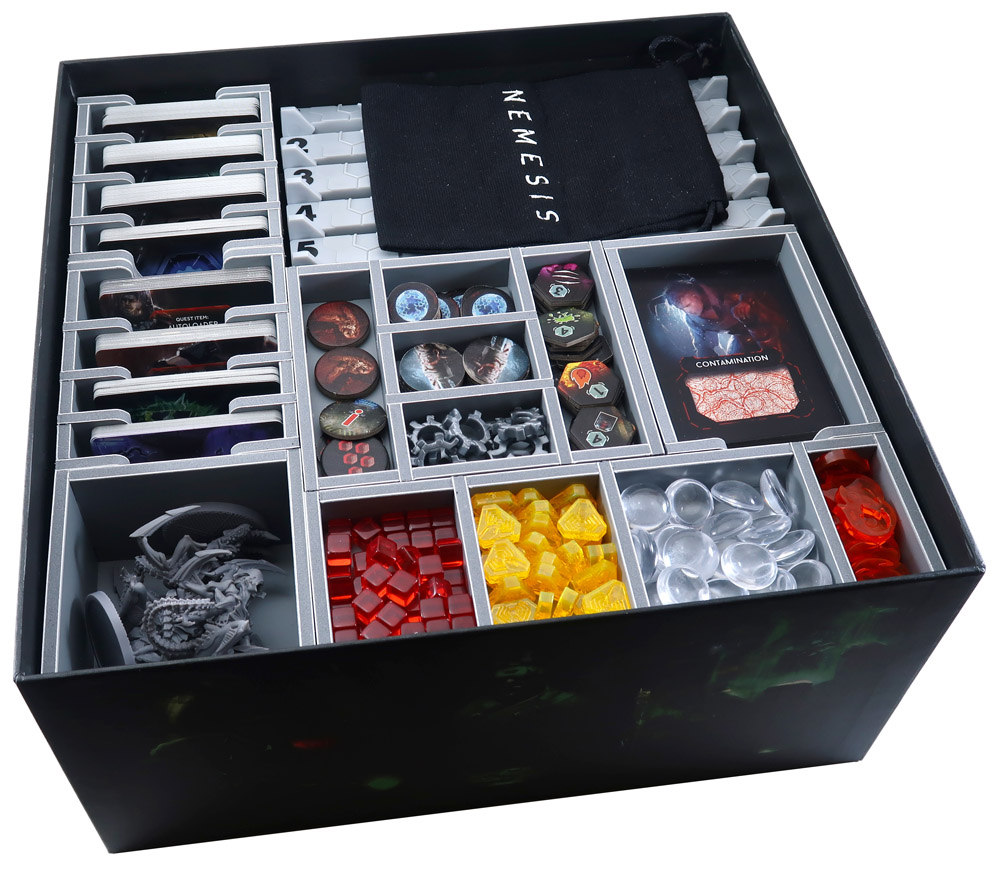