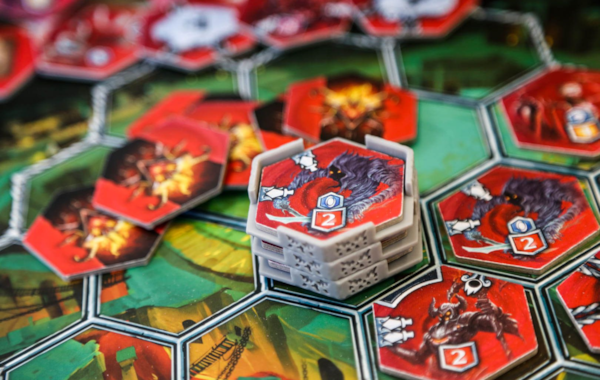 There are moments in a reviewer’s life where you want to punch something. You learn a new game, and halfway through the rules explanation someone says, “So it’s like Neuroshima Hex, then?”

Each side is a pile of hex counters that includes champions, runes that power up champions and order tiles that let champions do things they can’t normally do like move, rotate, push an opposing unit away or declare battle. When battle is declared every champion on all sides resolves its attacks in initiative order, and suddenly the arena is a lot emptier than it was before, because most champions can only take one point of damage.

Ultimately you need to defend your banner, which sits atop your monolith: a stack of counters that can unfurl into three pieces across the battlefield, which is not exciting enough to have the game named after it and fundamentally misunderstands what the ‘mono’ part of the word means.

Play is fast and tactical: you place tiles, jockeying for position and highest initiative, and then battle is joined – this happens several times each game – and special attacks trigger, and it doesn’t go the way you expected. The four forces are pleasantly different, and the art is impressionistic not hyper-real fantasy.

Monolith Arena claims it’s a skirmish game but in play it’s so elegant it’s almost abstract. The armies’ themes get a bit lost, but in the tense experience you’ll hardly notice.

This review originally appeared in the January 2019 issue of Tabletop Gaming. Pick up the latest issue of the UK's fastest-growing gaming magazine in print or digital here or subscribe to make sure you never miss another issue