Sizing up the return of a tabletop giant

Before there was Gloomhaven, there was Mage Knight. Vlaada Chvátil’s 2011 fantasy conquest game wasn’t a legacy title, nor was it strictly a co-op (though co-op play rules were included). But with its modular hex map, hero miniatures, action-card system and emphasis on granular, every-little-decision-counts strategy, it was an inspiration for Isaac Childres’ hit game.

Now, eight years after its debut, it’s back and bigger than ever. Literally. It’s been repackaged with its three expansions (The Lost Legion, Krang and Shades of Tezla) in an Ultimate Edition box that is annoyingly far too chunky to fit in your Kallax shelves. Including everything but the Atlantean kitchen sink, it’s an impressive relaunch. But how does it bear up in this post-Gloomhaven world?

The short answer is: extremely well. Of course, Mage Knight: Ultimate Edition won’t win back any detractors. The rules remain just as complex and chewy to digest, while the game itself is brutally difficult. Combining deckbuilding, exploration, conquest and very light RPG elements, it gives each character their own ‘deed’ deck, from which they must play cards with the utmost of care and a crystal-clear focus on good planning.

Those cards offer a basic action (Move 2, Block 2, Attack 2 and so on) and a stronger action that requires a once-per-turn mana boost of the correct mana type, drawn from a source of regularly re-rolled dice. Any card can add one to the strength of any action if played sideways, but this is often suboptimal. As is wandering aimlessly, or even curiously, around the board. As is getting wounded, each wound putting a useless, non-discardable card into your hand. As is anything else which in any way impairs your ever-crucial play tempo. Start lagging and the game is lost.

For some, it might feel overly mechanical, a little soulless. It doesn’t help that the story is scant and your characters, while represented by colourful pre-painted miniatures, are blanks. It’s all about the nitty-gritty of your choices each turn, and it requires a lot of thought. If played with others who are still learning its knotty ropes, the downtime can become crippling. But, as with Gloomhaven, once you and your fellow players click with its mechanisms and the game flow smooths, it will become one of the most satisfying tabletop experiences you’ve ever had.

That is why Mage Knight is worth the attention of newcomers. There is an undeniable thrill to powering your Norowas or Goldyx around the Atlantean Empire with smart cardplay choices, often via combos which you didn’t realise were there at the start of your turn, but emerge as you begin laying those deed cards down. It is puzzley in the best way possible – absorbing rather than frustrating – which is also why it’s an amazing solo game. So much so, some Mage Knight fans prefer it as a solitaire experience.

It is certainly one of the best out there and, despite its complexity and numerous components, has a blessedly quick setup time, too. On that front at the very least, it has Gloomhaven beat.

It’s a tough, complex, some might say merciless game. But lock into it and it will blow you away like a strength-eight siege attack. 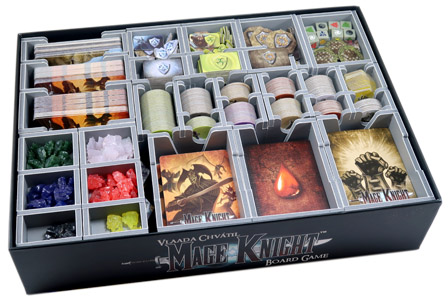 Compatible with Mage Knight Board Game®, and the Shades of Tezla®, Krang Character® and The Lost Legion® expansions.