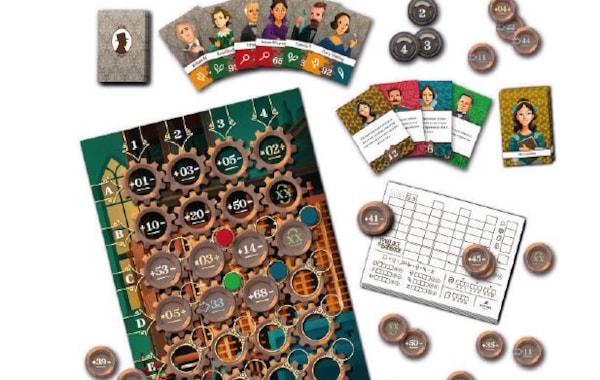 A game about celebrating achievements in science

Following the footsteps of 19th century computing pioneers Ada Lovelace and Charles Babbage is not an easy task, but convincing players that sums and multiplications – under time pressure no less! – can make a fun board game is equally as challenging. One that Lovelace & Babbage, a game by Scott Almes, a design mind behind the series of Tiny Epic games, takes head-on… and succeeds with impressive effortlessness!

In Lovelace & Babbage, players use the grid board to manipulate their numbers through the power of maths to produce their individual subroutine value, imitating the programming of an early mechanical engine. If players have completed all their number crunching correctly, the subroutine unlocks a special power that can be used on following turns. For an added challenge, players can also try to achieve the values of various patrons, which provide another method of earning victory points at the end of the game.

On paper, this sounds like too much maths to handle, however the flow of the gameplay does a good job at easing players in. Top rows of the grid contain easier calculations, with which the majority of subroutines and patron cards can be achieved, while lower rows, which are only unlocked in later rounds, are harder to incorporate in the players’ ‘coding streams’ but also reward bonus points for the effort. Tactical players will be able to use subroutine powers to cheat the system, making calculations easier or victory points higher, and, in case of a mistake, a special debugging action can be used to recalculate the round.

If any thought of maths is panicinducing, then Lovelace & Babbage may not be the right game for you. However, in any other case, you can safely put any reservations aside (and carry the one). As a game about celebrating achievements in science, Lovelace & Babbage has done something truly magical to make a rather dry subject so exciting