Legend of the Five Rings: The Card Game review When Fantasy Flight announced in 2015 that it was developing a successor to long-running ‘90s collectible card game Legend of the Five Rings – and therefore bringing to a close the two-decade run of AEG’s original – it was met with a mixture of excitement from those optimistic about a modern reimagining that could recapture the complex samurai-fighting title’s early magic, which had begun to wane over the lengthy years, and wariness on the part of fans concerned about the publisher’s treatment of a sprawling world that inspired fervent devotion and had sparked many players’ love affairs with tabletop gaming, not unlike fellow CCG Magic: The Gathering.

The result, Legend of the Five Rings: The Card Game, is an intricate and captivating competitive card-battler that remixes fundamentals of the original L5R’s gameplay, as well as drawing on the extensive universe further explored in its spin-off roleplaying game. The musculature of this rich lore is moulded around the refined frame of Fantasy Flight’s ‘living card game’ format – established in Android: Netrunner before being used in Star Wars: TCG, A Game of Thrones: TCG, Lord of the Rings: TCG and the recent Arkham Horror spin-off – to produce a game that feels instantly fresh and familiar, whether you’re already familiar with L5R or not.

As in the collectible card game, L5R: TCG’s action explodes from the electric interplay between dual decks of cards controlled by each player: dynasty and conflict, the latter revised from the original’s ‘fate’.

In very basic terms, dynasty cards generally focus on the provision of characters who can be summoned for battle, while conflict cards fuel the abilities, weapons and reinforcements needed to bolster their strength. Dynasty cards are initially drawn and placed facedown on provinces – four bases that can be attacked and destroyed by your opponent to open up a killing blow on your home stronghold – before being revealed and potentially purchased during the opening phase of each round. It’s an exciting setup intensified by being able to see your rival’s available dynasty cards, allowing you to predict and plan which conflict cards hidden in your hand might be able to counter their line-up of warriors as the tension ramps up. 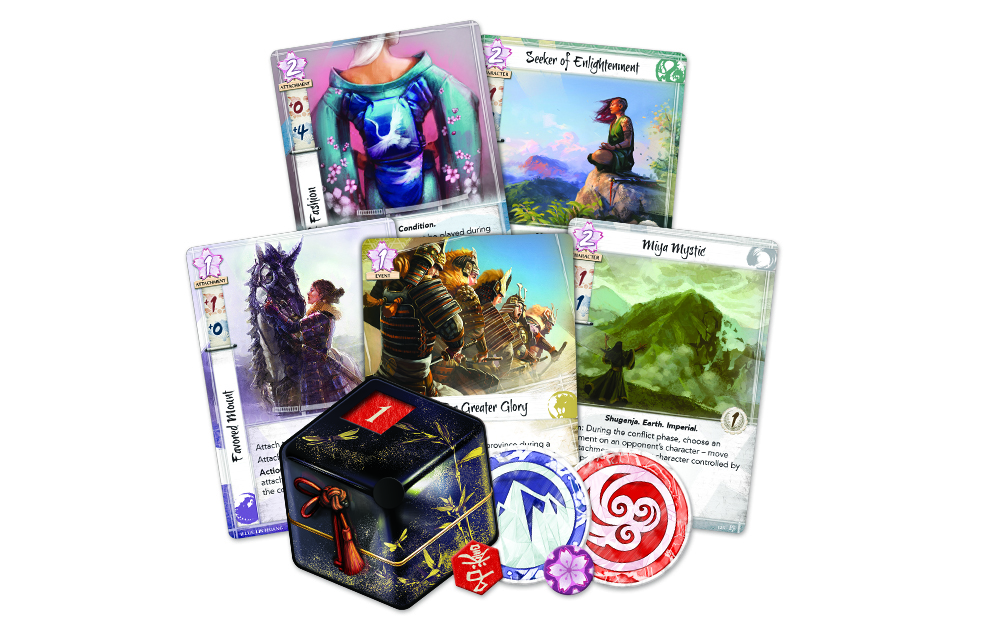 Suddenly, the action shifts from players passively preparing their forces out in the open to become a shadowy game of stealthy manoeuvres. Players set a dial to prepare a bid for cards – the higher the number, the more conflict cards they can draw before the fighting begins, but if they’re the higher bidder, they must pay their opponent the difference in honour for their disreputable behaviour.

In stereotypical fashion for its Japanese-inspired setting, honour is the lifeblood of each side – attaining 25 wins the game, while hitting zero means defeat. Honour is hard to come by, but can be quickly lost with too many expensive draws, layering in a small yet crucial pacing element to managing your bids over the course of a match. The bidding system is a gloriously atmospheric way of reflecting the by-the-book (or not) conduct of clans while introducing a dramatic build-up to L5R’s core action – a player on the back foot going all-in to try and brace their ailing forces can lead to a reversal of fortunes, or their destruction. It never fails to be completely gripping.

The other key concept driving L5R: TCG’s thrilling momentum is fate. Akin to Magic: The Gathering’s mana, but persisting and accumulating between turns, fate serves as the key resource used to buy characters and execute events. What makes fate unique is that it’s not used to invest in characters once, as in most card games. Instead, each character steadily degrades at the end of each turn, losing fate placed on them – when they run out completely, they’re discarded. As characters are rarely ‘defeated’ in the traditional sense, sticking extra fate on a strong character can swing a match by wearing down your rival through attrition, as their weaker troops are forced to withdraw. This becomes especially exciting when one player finds that they’ve exhausted their pool of fate, often leaving an opening for their opponent to strike and deal a major blow. The intertwined use of honour and fate give L5R: TCG the feel of a sword-fighting duel, with players interlocking in frantic clashes and trying to exhaust their opponent before stepping back to catch a breath during the planning phases.

Accentuating this short but intense pacing – and the importance of preparation – are the battles. Each player can engage in just two attacks on their rival each round: one using political influence and the other using more conventional military might. Provinces are left facedown until attacked, providing a dramatic shock of luck to the first few rounds as each location’s strength and special abilities are suddenly revealed, before those provinces already known become familiar targets in following turns. Players have the ability to select and organise five province cards – one attaches to their main stronghold – during setup, introducing an interesting layer of meta-strategy to defending, assisted by the chance of drawing ‘holding’ cards from the dynasty deck that further toughen provinces. 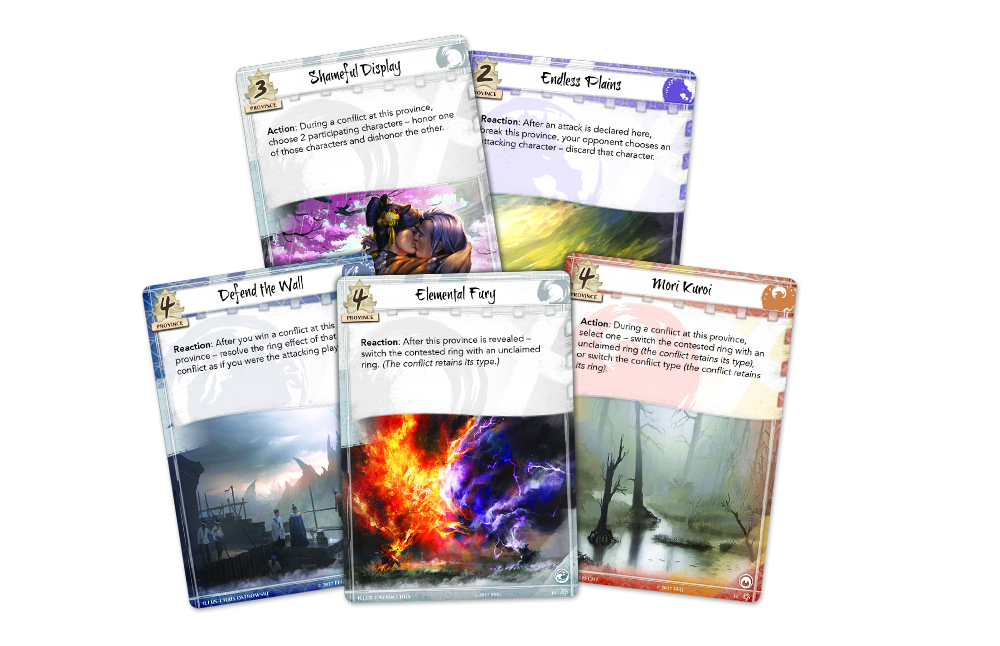 While calculated play of characters and events, effective investment of honour and fate, and a dose of luck all play a part in overcoming your rival, once you’re in the action there’s another important ball to juggle: the legendary five rings themselves. As a battle is declared, the attacker chooses one of the five, flipping it to the respective military or political side. If they achieve victory – whether or not the province is destroyed – they then get the opportunity to power up that ring’s ability, varying from gaining honour and drawing extra cards to honouring or dishonouring a character to modify their battle prowess, and removing fate from a foe. While the defender can’t use the ability if they fend off the assault, each ring can only be claimed once during a round, making every clash a tense skirmish with the chance to change the players’ standings rather than feeling impotent. There’s also the chance for the most successful player each turn to gain imperial favour, bolstering a side’s power during the following round and stopping some characters from attacking, which further widens the already vast strategic options on offer.

As you can probably tell, there’s a lot to manage in L5R: TCG, but it never feels overwhelming. The complexity comes from knowing when and where to invest honour and fate, rather than actually doing so, leaving plenty of room for those who commit themselves to the game to refine their mastery of the various interlocking systems and experiment with the broad tactical gameplay. L5R: TCG captures the preparation and behind-the-scenes planning of major military battles in just as streamlined and enrapturing a way as the heated confrontations themselves.

True to Fantasy Flight’s consistently impressive production budgets, the top-tier presentation glows from each card’s masterful artwork. The seven clans, locations and characters of the L5R universe come with the weight of more than 20 years’ of storytelling behind them, and this new chapter feels fittingly soaked in the narrative and style of the world. The dedication to L5R’s clan-centric structure may be frustrating for players of slightly more flexible competitive card games – although there’s the ability to spend influence to include cards aligned with other clans when deckbuilding, it’s not as open as a game like Netrunner. It’s also worth mentioning here that, like most of the Fantasy Flight LCGs, although you can play with two people and build a standard deck out of the core box, you’ll ideally be needing at least a couple of copies to put together a proper custom loadout.

Legend of the Five Rings: The Card Game builds on an impressive legacy and does it justice with a fascinating card-battler. It’s deep and atmospherically rich without being offputtingly complicated or sacrificing the more unique elements of its namesake. The legend lives on.

Legend of the Five Rings: TCG boasts an involving world and sleek set of gameplay elements that come together to form a beautiful recreation of samurai warfare from the bloody action at the front line to the wider-scope strategy playing out at the back. It’s complex, gorgeous and completely enthralling.