We all know Kung-Fu

Kung Fu Panda: The Board Game is one of frantically rolling dice against the clock. While the box describes it as a cooperative game, it’s cooperative in the way a bouncy castle is a team sport. You move your characters through each scene using dice rolls, spending and saving matching rolls against the task at hand. That could be a simple single movement roll to enter an open room, or matching harder rolls to break down a wall or climb on to a rooftop. You do all of this as fast as you can while a sand-timer trickles away.  This speed can be your undoing of course, as rolling the claw symbol ends up moving your dial on one more segment, which in turn can trigger further enemy spawns or damage your hero. The way this all comes out on the board is a lot of shouting what you’re trying to roll so that someone else doesn’t aim for the same target, a loud clattering of dice, and snatching away defeated enemies from the board and placing new ones as they spawn.

It’s a kind of chaotic, fun nonsense which ends up feeling like the more kinetic scenes of the films. This is reflected in board states are all set out for you nicely in the rule book, so a variety of authentic feeling missions can be tackled straight out of the box. Some are ingenious, like a scenario where you’re taking part in a rickshaw chase in which the play area extends as the chase continues, while others do feel a little samey with repeated objectives from one mission to another. 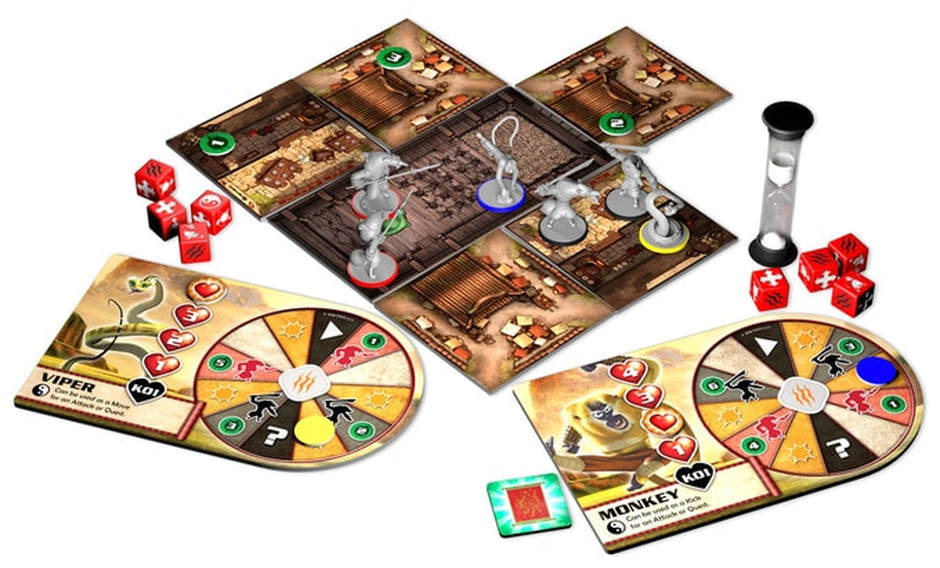 The downside is that it does feel extremely light. This is in part to with some of the mission design – the missions can feel focused and linear, so there’s not much in the way of making strategic choices together. There’s little of the “we should split up” conflict you might expect, although a few of the missions include multiple switches that have to be hit to progress, or items that need to be moved to locations.

Throwing switches and moving carts is something that can be done collaboratively however, meaning that often the best policy is to move room to room as a kind of kung fu blob, consuming everything in your wake.

All of this does provide some funny narrative elements however. Climbing on to the roof, finally, to find that your team has just beaten everyone and leapt into the next room does seem fitting considering the source. It does also feel good to come together as a team and defeat a boss against the odds, expressing a high amount of intention in a game with a lot of ricocheting about.

With a variety of modes available it’s possible to make the game easier or harder depending on the group. The low barrier to entry in any case makes it ideal for mixed groups, making it a great family game. And who knew you could get a sweat on rolling so many dice?

If a light and chaotic afternoon where it only sometimes feels like you’re working together suit you, and let’s be honest, some younger members of your gaming circle – then this with whittle away the hours. Just don’t expect to be playing campaigns in it for years to come.

You can buy your copy here.

TRY THIS IF YOU LIKED... Escape the Cursed Temple

When it comes to real-time action dice games, this is where it all started.