There’s an art to making arty games. Finding the right to way to reward creative talents with arbitrary points can make or break a good word or drawing game. In word games, this often means that creating longer words with given letters is key. But what happens when instead, we’re given words and have to get creative with letters? Welcome to Inkling.

Over three rounds, players use a slowly growing hand of letters to spell out words from their dealt secret list of six. Each list will have three simple words, two slightly longer and one behemoth, worth one, two and three points respectively. If a player to your left or right guesses a word, you both score its points value, rewarding you for spelling and guessing equally. You’re limited to seven guesses for each neighbour and whoever has the highest score wins.

The delicious dressing to this word salad comes from the letters. This ain’t your grandparent’s word game, where a C must always be a C. You can flip, turn, even cover up parts or add lines from others cards. Why not use that C as a U? Or N? Or even a D? 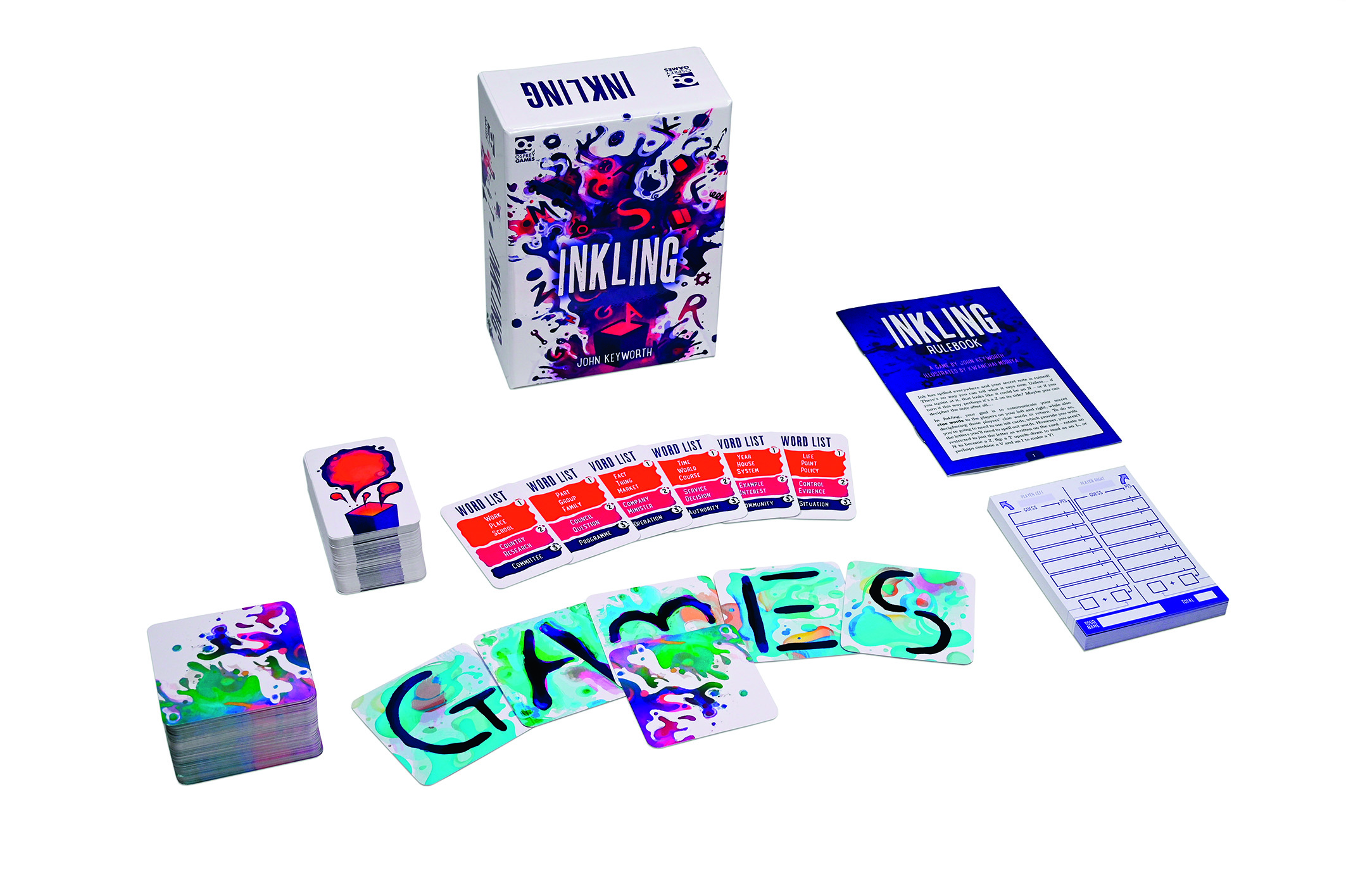 This twist of lemon will either captivate your imagination or sour your mood. Being dealt a hand of consonants then having to spell “Agency” or “Hurricane” will cause your brain to somersault. Inkling is a rare word game where spelling correctly is optional. With the examples above, you could partially cover a B, add another line to F and spell “aqEnsy” and hope that your neighbours can interpret your alphabetic monstrosity.

The letter cards have been brilliantly designed, ensuring that every letter is recognisable alone, but easier to warp or manipulate into others. Rounds aren’t timed to ensure players have space to think and twist their hand of cards into shape. After constructing their word (or words, if you’re feeling really confident), players have a few moments to admire their neighbour’s handiwork whilst silently praying that their own creation is somewhat legible, as with only three rounds and seven guesses, having an illegible or mistaken word can spell disaster (or more like “DIzasTr.”)

Between the first and second rounds, players will be able to discard up to two letters to draw new ones, as well as being dealt three additional letters, giving players more opportunities to spell their longer and more valuable words. This is also great for when you only have one word with a Y or Q, letting you spell it in your first two rounds then dumping it for hopefully something useful when spelling “Waterfall.”

It’s also essential for balancing the game’s biggest issue: the letter cards. The deck proportionally distributes letters, ensuring there’s plenty of As and Rs but only a single X and Z. Chances are high then, that if you need to spell “Anxious” or “Zebra,” you’re gonna need to work harder to squeeze all the potential from your letters instead of having exactly what you need. This also leads to random imbalance, where someone can draw almost perfectly (spelling “WaterfuLL” with single cards) whilst someone else has three Rs to spell “Scientist” with.

Despite this, Inkling still provides an enjoyable light word game that sees players wanting each other to succeed in spelling and guessing. It won’t occupy you all evening or convert people that can’t (or won’t) enjoy word games, but as a light-hearted giggle to engage your brain, it’s highly recommended.

A unique spin on word games that rewards creativity and literal card manipulation, Inkling provides a novel experience that works great as a short novelty or opening game to start up your brain cells.

TRY THIS IF YOU LIKED Pictomania

Speak a thousand words instead of six with this frantic drawing party game. Both games delight in pushing your creative talents, rewarding creators and guessers simultaneously.