Imperial Settlers: Empires of The North 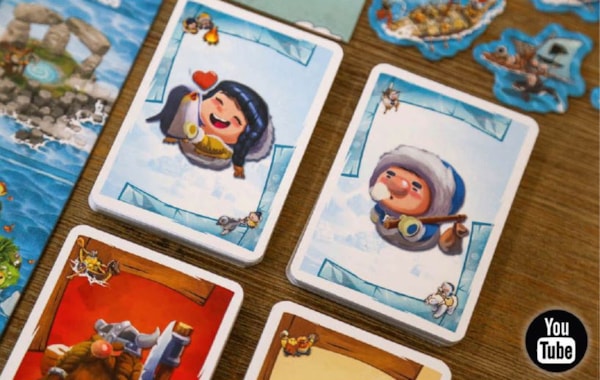 King in the North

Imperial Settlers, Ignacy Trzewiczek’s civilisation-and-engine-building card game, pushes out the corners of both its world and gameplay in this accomplished new instalment.

Empires of the North is both a refinement of Imperial Settlers and a new game entirely. The central tableau-building is still here, with players adding to their layout of
cards to produce resources, construct buildings and earn victory points. Gone is a common shared deck; the three factions in the box are now fully asymmetric, with the Inuit, Vikings and Scots (each is separated further into two clans) offering a way of playing that’s even more pleasingly individual and thematic.

Also absent is Imperial Settlers’ more deckbuildy auto-generation of resources, with goods now carrying over between turns and players having to manually produce the supplies needed to build and power their array of VP-churning buildings. The only thing you will get back each turn are workers, which now come with their own interesting choice of being traded to keep cards or kept to activate building abilities.

Having to consider how you save and spend your resources outside of a single turn gives Empires a distinctly different feel with a little extra breathing room for newcomers to the series – something that the swap from five set rounds to a winning total of 25 points also helps with, without dragging out the overall play time.

The cardplay is supplemented by a new action-selection rondel that players assign two counters to in order to perform key actions: harvesting extra resources from farms, gaining more workers and so on. It gives the game an engaging extra dimension and, rather than feeling like an awkward system bolted on for the sake of newness, ends up being a clever way of building a stable foundation of regular actions under the varied and draw-dependent abilities of the faction-specific cards.

There’s an engaging spatial element to the rondel as well, with counters able to trigger an extra adjacent action at the cost of food, meaning up to four actions can be taken each turn to maximise your civ’s expansion. It all knits together seamlessly, managing to expand the strategic options outside of players’ card tableaus without diminishing the central loop of playing and activating cards.

As a whole, Empires is a softer and more approachable experience than Imperial Settlers. The race to 25 points means there’s more leeway for new players to get to grips with their clan’s individual cards and abilities, without the pressure of a limited number of rounds. The earlier game’s player on player attacks have been dialled back here, merely exhausting ability cards for that round instead of destroying them completely, making Empires less explicitly aggressive and punishing.

Even so, the game introduces more passive competition through the sail action, which lets players send out their boats to conquer (for permanent benefits and VP) or pillage (for instant rewards) islands near and far. Weighing up the benefits of cheaper immediate return against an investment in longer-term advantages is an interesting decision to make, and plays nicely into the extra effort required to produce goods and keep your civilisation’s engine running. Like the rondel, the expedition board is an unexpected addition to the central card game, but never feels anything other than a welcome and well considered addition.

Although Empires seems on paper to be Imperial Settlers with extra boards and mechanics thrown into the mix, it’s a testament to how tightly thesystems old and  new have been locked together that it winds up being both a faster and more satisfying experience overall, whether you’re coming to the series for the first or fortieth time. Heck, we’d be so bold to say it’s not a descendant of Imperial Settlers – it’s a deserved successor