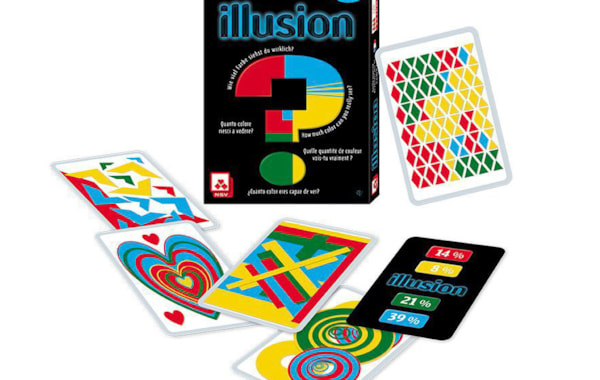 Is the next game from the creators of The Mind another must-have?

When the designer of one of the most interesting games of last year – The Mind – comes out with a new game from the same publisher – NSV – in a box the same size and colour – small and black – you’re going to assume a connection. Is Illusion the sequel to The Mind, a follow-up or some kind of sibling?

No. It isn’t. The Mind is a tense co-op played mostly in silence. Illusion is a game about guessing how much of a card is covered in red, yellow, green or blue. That may not sound thrilling and, though Illusion tries hard, it isn’t.

The deck of 98 cards is at the heart of the game, each one with a unique four-colour abstract pattern on it. With one card already down, the first player draws the top card and has to judge whether it has less or more of that round’s designated colour than the one in play, placing it before (less colour) or after (more colour).

If the next player thinks they’re wrong they can challenge, otherwise they have to draw a new card and place it where they think it fits in the card sequence. Eventually someone challenges, the cards are flipped to show the percentages printed on the back and someone gains a point.

It’s Timeline with patterns instead of dates, and more replayability but less chance of being able to work out the right answer with your brain. It’s Liar’s Dice without the randomness or bluffing. It’s fast and clever, but it isn’t very interesting. If you’re looking for something to sit next to The Mind on your shelf, this isn’t it.