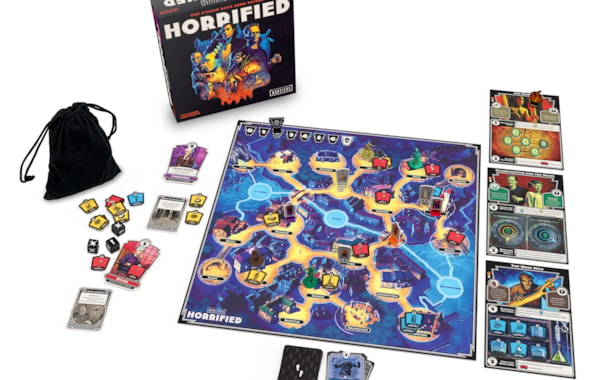 Ravensburger have really been knocking it out of the park and into the movie studio with recent Hollywood tie-ins. 2019’s Jaws and the Disney based Villainous (Wicked to the Core reviewed here) have shown us that it doesn’t just have to be a cash-grab when it comes to bringing big names to our tabletops.

So then, in shambles Horrified, part of a Universal Studios deal that puts the classic monsters of the silver screen firmly in the centre of your attention. And it’s really quite good.

The game is one of running around collecting items of specific colour and value to complete the selected monster’s quest while trying to avoid said monsters. Each quest is defined by the monster card, presenting a kind of mini-game.  This could be finding and smashing Dracula’s various coffins around the town, playing a kind of slide-puzzle with The Mummy, or to teach both Frankenstein’s monster, and the bride of said monster, a little about how to be human. While sometimes you can be blocked from completing quest by a bad series of draws, or an unlucky attack by a monster (your items are also a kind of health system in the game) it only adds to the overcoming-the-odds theme of the game.

All of the quests need to be completed not only against the clock – something set by the number of monster cards in the deck – but also against the monsters themselves who will cause terror by, er, terrorising you and the villagers. If a villager is killed or a hero hospitalised you move the terror meter up. While you take a number of actions each turn of your own choosing, at the end of your turn you flip a monster card to show you which monsters are on the move, and how much they’re attacking for when they land on the same space as a hero or villager.

It’s a light game that does a great job of not cutting off your options. You can do pretty much anything you can think of during play. As it’s a collaborative experience you can work out the best plan together, share items, and even have really quite cinematic “leave me, take this and complete the quest!” moments as the cards tick down.

The monster design is quite nice, even if the figures are the most generic, but that’s kind of expected. Certain monsters mark players and follow them, whereas the duo of Frankenstein and Bride can be drawn to one another. Thematically it’s tight enough and the quests are simple to understand quickly enough that you’ll want to set up a different combinations of monsters and heroes on the board as soon as you finish your first game. The second game in my group was the predictable “let’s use all the most difficult monsters” option that saw the terror meter spike alarmingly quickly. Which is exactly what you’d expect when caught in something of a bro-hug between Dracula and the Wolfman.

A surprisingly replayable, jolly, collaborative game that lends itself to occasional cinematic moments. While not full of depth and complexity it has just enough moving parts to provide some tactical fun.