Holding On: The Troubled Life of Billy Kerr review 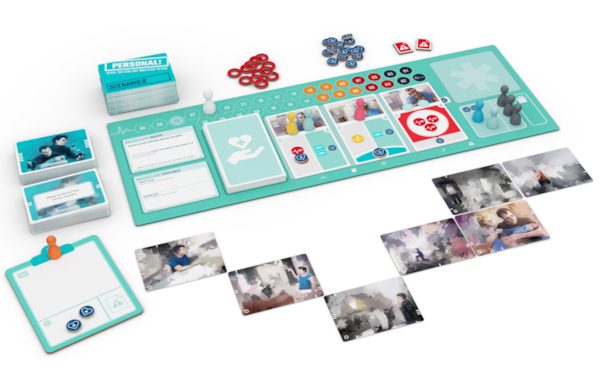 Board gaming just got real

Holding On is, without doubt, a very special game. Its mature approach to theme and narrative is exemplary – arguably revolutionary, making it a must-play for any serious tabletop gamer this year. But it is also difficult. Not so much in terms of its potentially too-close-to-home subject matter as in the harsh way its mechanisms often play out.

This highly anticipated title from Rory ‘Story Cubes’ O’Connor and Michael Fox certainly feels different to anything else out there. The board’s clean, modern design and crisp iconography may bring to mind Fog of Love and T.I.M.E Stories but, unlike most games, Holding On is about life and death. Real life and real death. In a hospital bed, with a tube up your nose and knot of regrets clogging your chest.

It casts each player as a nurse on a palliative care team in a hospital, where 60-year-old Billy Kerr is brought following a heart attack on a plane. Your job is to work together; not only to keep him alive, but also to uncover his life story, which is revealed in ten enticing chapters.

This life-reconstructing narrative element is ingeniously visualised via two decks of cards. One gradually forms a five-by-six picture grid of partial memories, each impressionistically painted by artist Bryn G. Jones with swathes of detail obscured. The other provides Billy’s clear memories: revelatory, full-colour variants which players strive to gain and lay over their blurry equivalent.

The meat of play involves covering shifts by tactically placing staff pawns (either player nurses or NPC assistants) on randomly-drawn patient cards, one for each day’s three shifts. Unless you’re hit with a medical emergency, each shift presents an either/or choice: either give medical care, preventing Billy’s condition from worsening, or talk with Billy and try to gain his trust, drawing the aforementioned memory cards in search of whatever details you need to complete the scenario. Palliative care can also earn you care tokens, basically the game’s currency. At the end of each day, gathered memories are discussed by the group and satisfyingly arranged on the table, with the hope that you’ve gone some way to achieving that scenario’s objective.

The problem is, unless you are especially lucky with your card draws, you will more often than not fail. Despite the sweet simplicity and accessibility of its system, Holding On is extremely tough. Which is appropriate to the theme: life is hard, and working on a hospital ward especially so. But it can become very frustrating, especially when all you want to do is find out more about this interesting character’s story – all the more interesting for being rooted in real-world history (there’s a clue in the title). The game’s event cards can be horribly punitive, and arrive with increasing regularity as the memory decks shrink, often turning strong starts into disastrous finishes. The care tokens, meanwhile, feel precariously scarce, especially when events (such as Billy refusing to talk) turn them into an easily-wasted resource.

Unlike Pandemic Legacy, which progresses its story whether you win or lose, Holding On keeps you, well, holding on until you manage to scrape through to the next chapter. It may prove too exasperating for some players, who might want to house-rule an easy mode (perhaps remove some event cards, or stack the patient deck’s medical emergencies as you would the epidemics in Pandemic). Otherwise, there’s a danger you’ll just want to give up, and miss out on the fascinating revelations buried in the narrative deck, as well as future scenarios’ tweaks to the gameplay.

It’s a shame, because this is a beautifully emotive and evocative game with a truly compelling story. But is it compelling enough to replay the same scenario multiple times? That depends on how much patience you have for this particular patient.

A bold and significant game that takes the tabletop experience to a new, mature and thoughtful level. But be warned: its high difficulty level may prove an obstacle to getting the most out of its emotional theme.