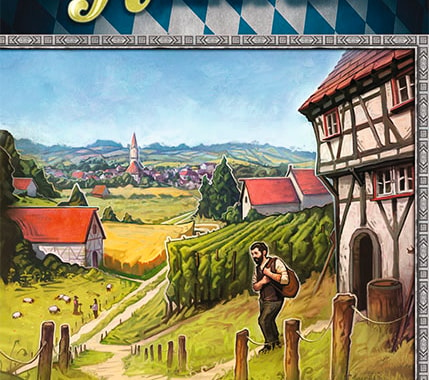 One look at the box for Hallertau will be enough to send some gamers running in terror. From its bone-dry agricultural theme to the “EXPERT LEVEL” warning on its front cover,  it’s clear about what it is: a Eurogame for Eurogame players.

Try a few rounds, though, and you’ll find that while it comes with tough decisions, multi-turn planning and an array of strategies to explore, it’s surprisingly intuitive.

The game sees you and your friends become farmers (of course) raising sheep, planting crops and improving your land to extract the maximum possible reward from your fields. To pull it off you’ll dispatch workers to undertake a variety of tasks on a shared action board, shearing sheep, cultivating crops, visiting the local market and otherwise propelling you towards victory.

Where Hallertau differs from most worker placement games, though, is in its flexibility. While in similar games claiming a particular action denies it to other players, here you’ll be able to place your workers on already activated spaces – but at a cost. To take an action that’s already been claimed, you’ll need to expend one more worker than the last player to take it.

It introduces some interesting budget-keeping. You might really want to spread manure, but need three workers to do it. Should you pay the hefty price or wait, dispatching your farmhands on other tasks until the fertilising action becomes cheaper?

The effect is that while deciding how best to employ your helpers is critical, Hallertau is less directly competitive than other worker placement games. The most you can generally do to impede your opponents is make something they want slightly more expensive. But in true Eurogame style, in eschewing antagonism it creates an array of interesting problems for you to chew over.

Which of your fields should you farm, and which should you leave fallow to boost the yield from next year’s harvest? When and how should you spend the cards that grant you extra actions and resources? Do you need to set all of your employees to work this turn, or could you exchange some of them for useful tools? Which of your farm buildings should you improve? How can you ensure the survival of your sheep for one more season?

Making this multitude of moving parts work together is key, and it’s a lot to hold in your head at once. With a 24-page rulebook and a 10-phase turn structure, it’s an intimidating prospect. Luckily the game’s iconography is easy to follow, and most of the steps on your turn are actually very simple. It’s only in combining them that the complexity emerges. Watch a rules video and you’ll only need to dip into the manual to clear up an occasional point or two.

If you’d rather go to the dentist than play a fairly complex farming-themed strategy game, Hallertau isn’t going to change your mind. But if crop rotation and incrementally upgrading your homestead sounds like your idea of a fun Friday night, it definitely deserves your attention.

If you’re a fan of Uwe Rosenberg’s previous farming games, it’s interesting to see how he’s approached the theme from a variety of mechanical angles.