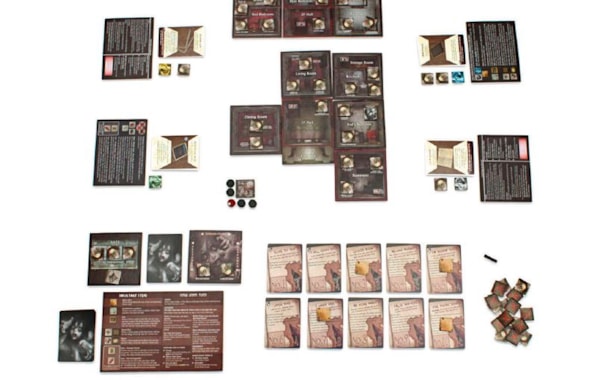 Buy your copy of Hako Onna from us here.

Hako Onna is a game based onmJapanese horror movies like The Ring and The  Grudge, aiming to emulate their tight claustrophobic experiences heavy on suspense and shocks. A hit in Japan a couple of years ago, it’s now available in an English language translation from WizKids.

At first sight it looks like a cut-down Betrayal at House on the Hill, with one villain and no characters. You’re a group of ‘visitors’ trapped in a mansion made of square tiles only nine of them, including the second floor and a basement, but see above about claustrophobia. One player is the Hako Onna, the ghost of a woman, trapped in the house. The visitors win by escaping, defeating the ghost in various ways or laying her to rest; she wins by killing all the visitors, or if they all give up and scream, “I lose all hope!” which is an unusual rule but gives you an idea of the tone of the game.

At the core of the game are its two rather lovely movement systems, both packed with atmosphere. The Hako Onna moves by swapping her tile with any of the facedown tiles that litter the rooms, while the other players have their eyes closed. This idea, that the Hako Onna acts and moves in darkness, is simple but really effective.

Meanwhile when one of the players moves they have to add a wooden disc to a stack on the ‘noise board’, and some of the discs have pearl-like bumps on them so the stack is crooked and unstable. If it topples, the visitor has made a noise and the Hako Onna immediately gets a turn.

It’s like Jenga in miniature. There actually is a horror RPG, Dread, that uses a Jenga tower to represent the increasing tension in the story, and Hako Onna’s system is a tiny, perfect version of that. And the game’s structure is like the hidden movement of Fury of Dracula in reverse; you get clues to where the ghost is in the house, and you try to stay the hell away from there.

The visitors explore the house, looking for the items they’re going to need to either escape (get the safe combination, open it and retrieve the keys) or beat the ghost, and naturally they do this by ‘peeking’ at facedown tiles and if they find the Hako Onna’s tile then they die immediately. If I have a major criticism then that’s it: death is capricious, and feels like bad luck rather than bad strategy. However, the dead player then becomes a Hakobito, a minor ghost, and can prevent the remaining visitors from getting the tiles they need.

There’s a lot I haven’t covered: items and their powers, the Hako Onna’s special powers, the diaries, how the visitors win. Space doesn’t permit (it’s that claustrophobia again). You’ll have to take my word for it that everything ties together to create an absorbing narrative and you do feel like you’re inside a wellcrafted horror story or movie.

Buy your copy of Hako Onna from us here.