Glass Road is a re-print of Uwe Rosenberg’s 2013 resource management and tile placement game commemorating the 700-year-old tradition of glassmaking in Bavarian Forest. When looking at its box art, popping a multitude of cardboard tiles and trying to align stickers on the small resource tokens, it is hard to shake the feeling that this is, perhaps, the most the Euro-est of the Eurogames. It has that traditional style artwork, the medieval theme, the economic system that feel very much ‘been there, done that’… multiple times over.

Sure, some elements are exactly as you would expect, like the resource management and production. Players will be manipulating their resources to acquire new building and terrain tiles or to get more valuable resources, like the titular glass and brick. Building tiles can give one-off resources, help set up production chains, or give alternative ways to score points at the end of the game. When acquired, players place building tiles on their individual player boards that will become more populous with constructions and terrains towards the game’s end. The building powers are, perhaps, not the most exciting, but there is plenty of variety ensuring that every player will find something worthwhile to spend their hard-earned resources on. 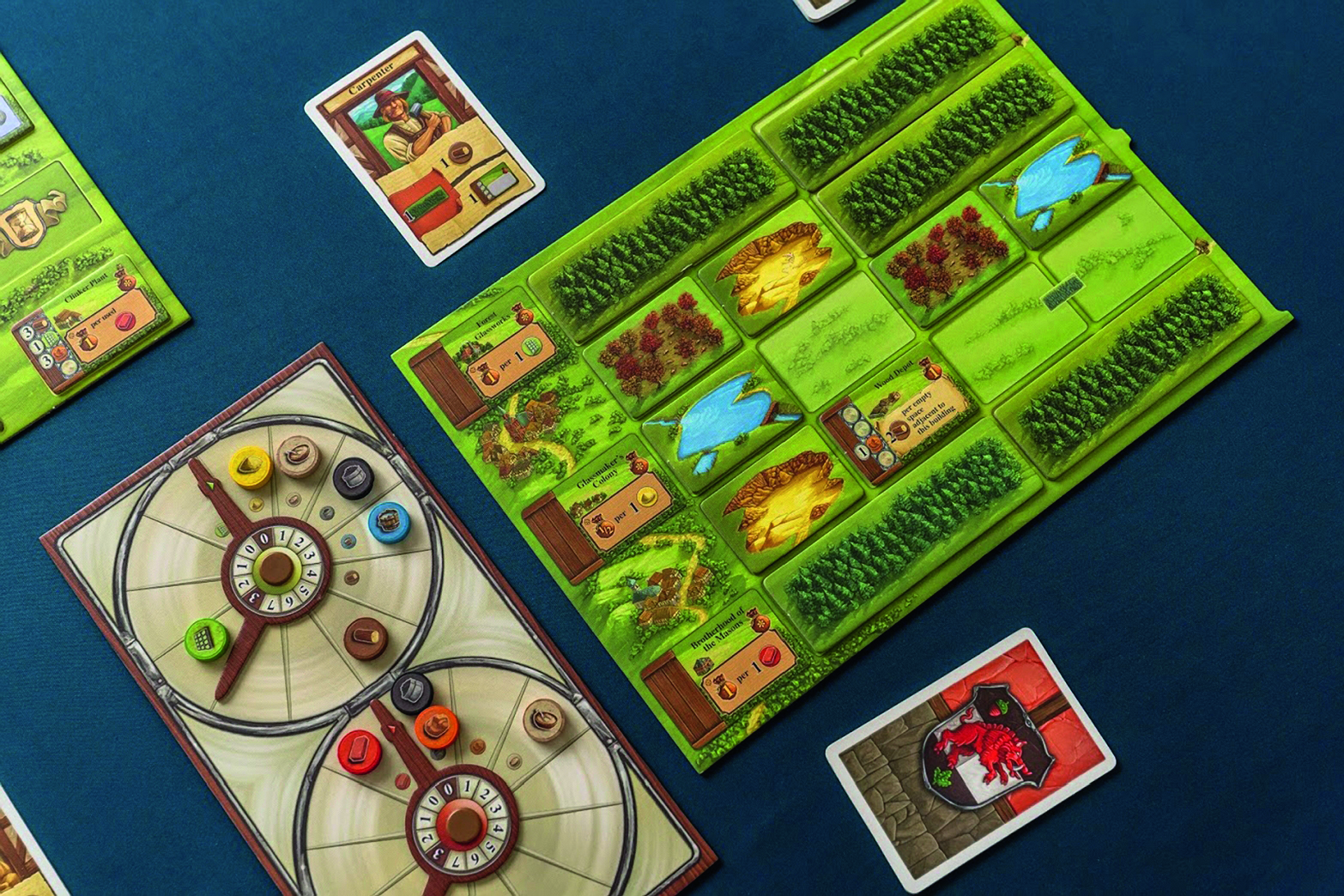 There is, however, a reason that Glass Road stands out among other Eurogames – the card play. Every action in the game is performed by playing a card, representing one of the specialists. These are the workmen that help you to run your business, by chopping food, fishing, building, etc. Every round, players choose five specialists, and play one of them at the time to perform actions. If you play a specialist and other players have the same one in their hand as well, they can piggy-back on your action, performing it without using up their turn. It is a both a risk and a reward. You don’t want anyone to copy your action, but you would like to piggy-back on someone else’s.

In many similar games, players can get so hyper focused on their boards that they end up playing a solo game, until the very end of the game when everyone compares victory points and decides the winner. This could have been the case with Glass Road as well, but the card play makes player engagement essential and, most importantly, incredibly fun. It feels great to guess a card an opponent played; it feels even better to play a card no one else has picked. Even if someone did piggy-back on your action, the penalty is not onerous: you get one less benefit from the card.

Glass Road has eight different resources, four types of terrains (each can generate resources and victory points) and ninety-two different building tiles. The sheer volume creates an elaborate resource system, even if individually each element is not complex. Glass Road is a think-y game, but for the depth it packs, its presentation and table footprint are minimal through clever and streamlined component design. The production wheels are the standout element. They use rotating arrows, like in a clock, to track the number of resources. Simply rotating an arrow when the resource is gained eliminates the clunky constant movement of tokens to-and-fro, making the whole gaming experience immediately smoother. Seeing how well this component works within a game, it is astonishing that it has not been picked up by resource management games everywhere.

Perhaps, that is the most appealing characteristic of Glass Road – you think you know everything about it, but it manages to pleasantly surprise you in every element of its gameplay.

Almost a decade later after its initial release, Glass Road still feels fresh due to its exciting card play. Although its art, theme and some mechanism feel ‘of the time’ when compared to more modern games, Glass Road also stands as proof that a great gameplay mechanic is ageless.

TRY THIS IF YOU LIKED: AGRICOLA

If you played Uwe Rosenberg’s classic, Agricola, then Glass Road will present a perfect meld of the familiar and the new. 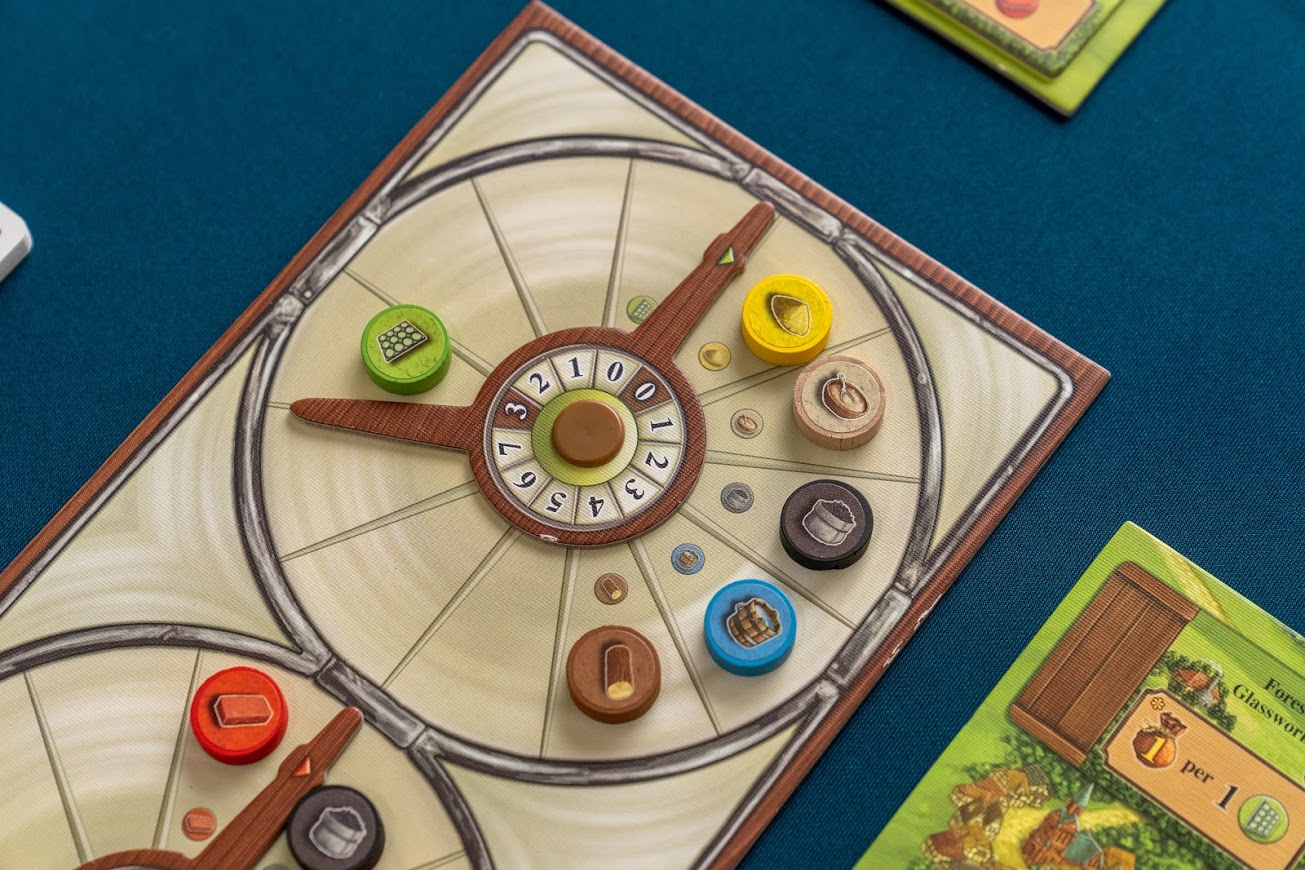