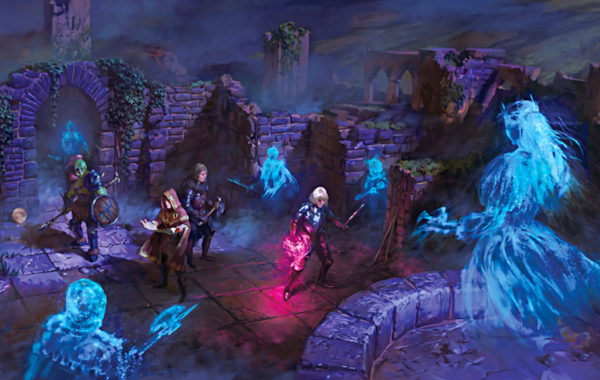 One of the selling points of the Genesys system was that it allowed you to play in any weird and wonderful world you desired. While it may seem as though a setting book like Realms of Terrinoth would limit this freedom, the new options, rules and ideas it offers just expand the GM’s toolbox.

Make no mistake, Terrinoth – home to several existing Fantasy Flight games – isn’t exactly the most exciting or original setting out there. It’s a world of fire-breathing dragons, noble heroes and scheming wizards that will feel instantly familiar to anyone who’s dabbled in D&D or sunk a few months into World of Warcraft, with no shock twist or unique gimmick pushing us out of our comfort zones.

That isn’t necessarily a bad thing.

The generic nature of the world means that you can bend the ruleset to fit your wild and wacky campaign about sky-pirates, subterranean spider-warriors or immortal champions and still make use of almost everything in the book. At the same time, if you want to run something a little more conventional, there are plenty of story threads and fantastical locations already set out for you to play around with.

A vital part of playing in a fantasy world is creating your own noble heroes and heroines, and most of the new mechanics introduced in Realms of Terrinoth offer new options to characters. These include the chance to play as orcs, elves and even catfolk, plus a whole set of setting-appropriate careers – the rough equivalent of classes – that replace those found in the core rulebook. One welcome addition, when compared to many other games, is that not all the careers on offer are combat-focused, so a scholar or diplomat can offer just as much to the party as a warrior or mage.

Beyond this, the new options continue the trend of easy customisability found in the basic version of Genesys. Within the space of only a dozen or so pages you can find rules for modifying weapons and armour, brewing alchemical potions and working with magical runes, while another section lays out the benefits that a wand fashioned from bone will offer over one carved from willow.

None of these minor rule updates or options are particularly deep or complicated, but they provide so many little ways to tweak how a character feels and plays. With a little imagination, the correct combination of talents, skills and equipment can allow players to create virtually any kind of adventurer they can imagine.

This broad-but-not-too-deep trend continues with the array of stat blocks included for new allies and enemies alike. These are grouped up according to region, with the desert-based assassins appearing alongside djinn while elven archers sit with evil fae. While this doesn’t always make it easy to find the specific creature you’re looking for in the heat of an encounter, it works well for throwing things together on the fly based upon the adventure your party is embroiled in.

The difficulty of navigating the book may in fact be its greatest flaw, as much of the vital information you would need to consult on a regular basis is all kept in one chapter right in the middle of its 260-something pages. This isn’t anything that can’t be solved with a bookmark or a well-placed thumb, but it is perhaps a sign that Realms of Terrinoth is absolutely stuffed with lore and history.

For some people this will be a wonderful excuse to sit down and plough through the background of this competently-crafted fantasy world, but for the rest of us the sheer quantity of lore on offer is a little bit overwhelming. Perhaps that’s an unfair criticism of a setting book, where the world it sets out is one of the selling points, but it’s hard to see what too many gaming groups will be able to get from the details of Eleanor II’s role in the Great Goblin Uprising of 997, for example.

If you’ve ever wanted to play around in the world of Runebound, Runewars or the recent Legacy of Dragonholt, this should be an instant purchase. However, even if you don’t have any existing connection to the world of Terrinoth and are looking for an alternative to the big boys of the heroic fantasy market, you could do much worse than picking this up alongside a copy of Genesys.

The first setting book for Genesys is perhaps a little formulaic, but it hits all the notes it needs to get a fantasy campaign on the road.