…or rather, flounder in Gloomhaven

About 40 minutes into a game of Isaac Childres’ Euro-style prequel to his magnificent, BoardGameGeek rankings-topping dungeon-bash Gloomhaven, this reviewer was asked by a fellow player: “So when does this get fun?”

The player in question, it should be noted, loves Eurogames and is a huge fan of Gloomhaven itself. But an hour later, the fun still hadn’t arrived and we unanimously agreed it was time to abandon our long, bland struggle to construct Childres’ fantasy-world capital and pull our game night out of the doldrums with a dose of Wildlands.

Perhaps it’s down to the sheer weight of expectation that comes with the Gloomhaven branding, but it’s hard to see Childres’ follow-up as anything other than a crushing disappointment.

Founders of Gloomhaven has a promising theme, casting players as different, non-standard-fantasy races who must come together to share, combine and upgrade resources to construct the titular metropolis, while competing to earn the most points through the delivery of said resources to prestige buildings.

It combines the tile-laying of a King Ludwig game, the asymmetric factional player boards of Terra Mystica and the action-selection system of Puerto Rico, whereby each player lays an action card (trade, upgrade, recruit, etc.) that allows the others to take a lesser ‘follow’ action of the same type.

That’s not all Childres’ has thrown into the Euro mix. There’s a bit of (optional) worker placement, too; by constructing race-specific houses, you can free up meeples to pull off extra actions, with each prestige building adding another possible action. And there’s a round-ending vote, where players bid to choose a prestige building (all familiar to those who have torn through Gloomhaven’s campaign) to place on the map.

Which all sounds fine, except these individually neat Euro elements just don’t add up. The game creaks horribly under the heft of its own, overly complex mechanisms, and you’ll be concentrating so hard on maintaining all its fiddly elements to really vibe on the theme – a problem which is acutely compounded by the unappealingly muddy colour scheme of its board.

Each round is marred by a leaden pace (until the endgame comes into sight and things finally speed up) and ludicrously finicky placement rules, leeching all the enjoyment you’d expect from a title focused on tile-laying. Meanwhile, you’ll be so busy trying to figure out point allocations, which sporadically happen via a trickle-down effect after advanced resource tiles and prestige buildings are placed, you’ll hardly find time to appreciate a sense of ‘building’ Gloomhaven itself – whether on the tougher, “thematic” board, or the simpler symmetrical map you’ll find on the flipside.

Finally, a word on the rulebook: it is a headache-inducing, editor’s nightmare of overly complicated, reader-unfriendly phrasing. Our advice is to not even bother reading it before watching a video explanation or walkthrough. Although, it does give a fair warning of the confounding play experience that follows.

What should have been a lightweight Euro-dip into Gloomhaven’s history turns out to be a frustratingly over-complex and unintuitive brain-drainer. Though if you prefer puzzling out mechanisms to revelling in a theme, then you may get something out of it. 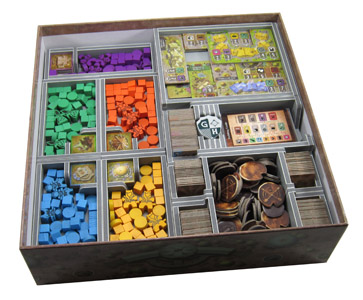 Compatible with Founders of Gloomhaven®.