Talk About a Revolution

Set against the backdrop of an American Revolution tainted by tinges of the supernatural, Flames of Freedom melds musket balls with monsters to create a densely packed mix of horror and adventure that’s run through with a richly detailed appreciation of colonial-era history. 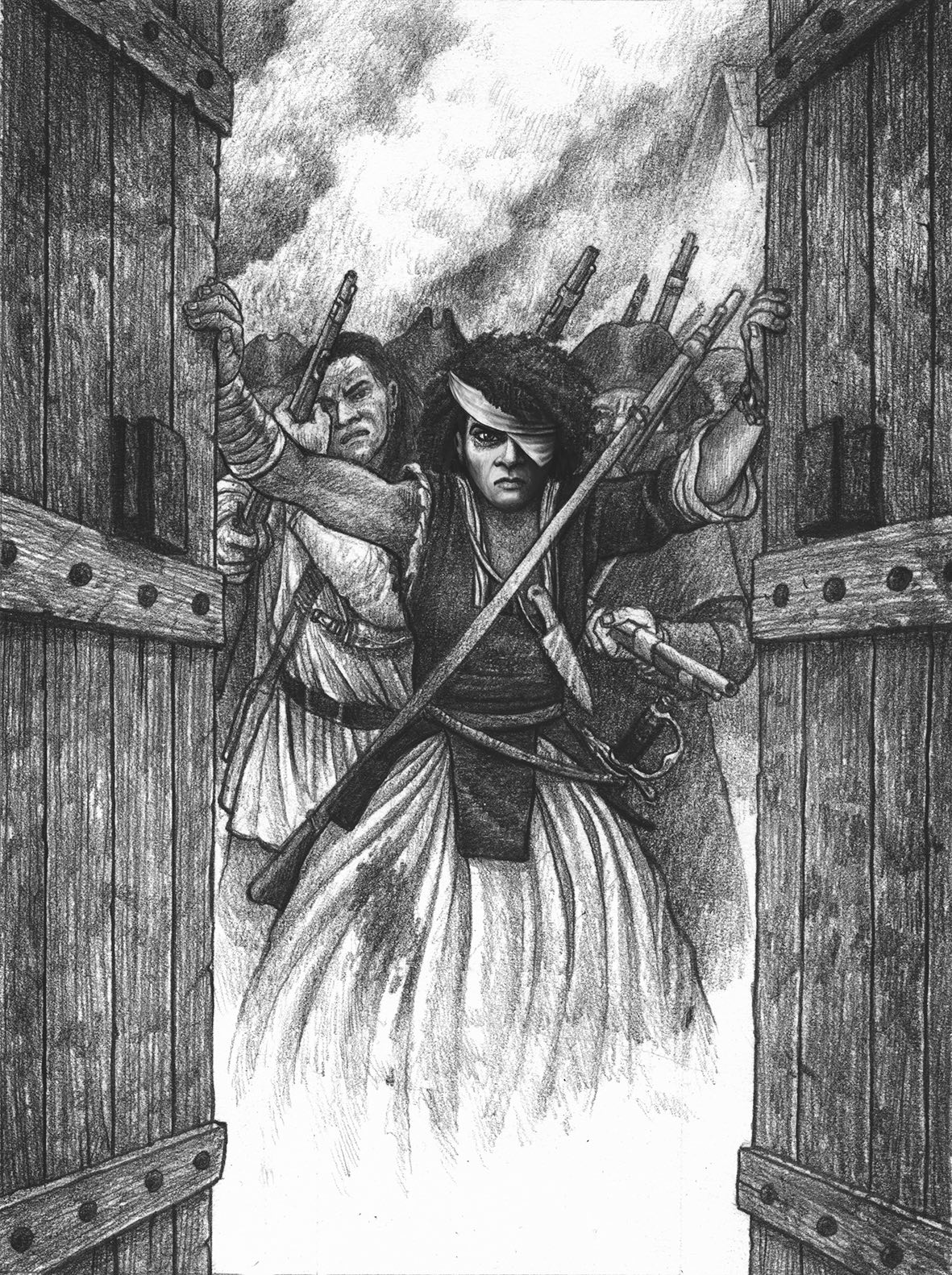 A successor of sorts to the grim and gritty fantasy world of Zweihander, this new title carries on its predecessor’s trademark love of lethal combat and mud-spattered grit. The result is a game that feels permanently poised on a knife-edge; one where big numbers and shiny powers fade into the background, overshadowed by clever plans and fair fortune. Death or debilitating injury are always hovering only a few flubbed rolls away, and the game revels in inflicting them on player characters and NPCs alike.

This tone feels rather appropriate for the kind of world Flames of Freedom is trying to create. By blending the very real horrors of the Revolutionary War with an undercurrent of supernatural secret societies and mythical beasties haunting the wilderness, the entire game world is stuffed with a sense of both danger and opportunity. It’s an exciting time, but also a deadly one.

The game is also keen to acknowledge colonial-era America can also be quite a difficult time to roleplay in – at least, to roleplay in without stumbling over how to deal with awkward issues of discrimination. Impressively, instead of trying to sweep awkward historical facts like slavery and colonial exploitation under the rug, Flames of Freedom confronts them head-on and tries to help players set up games that deal with the reality of the situation without indulging in it.

Whether this will be enough to get your table comfortable playing in an undeniably tricksy time and place will vary from group to group, but, if nothing else, the authors have put a heck of a lot of effort in trying to push player safety and respect to the forefront. There’s a lengthy list of cultural consultants and sensitivity readers filling out the credits page, and a great many side-notes on context and how to avoid falling into easy stereotypes.

Once you get into the game itself, you’ll find that the core ruleset is wonderfully simple. Like Zweihander and the Warhammer Fantasy RPG that inspired it, Flames of Freedom uses a d100-based roll-under system – basically, your skills are represented as percentages, and if you roll underneath them you succeed at whatever you’re trying to do, whether that’s sweet-talk a red-coat or huck a rock at a monstrous ghoul. It’s nice, clean and incredibly easy to explain to new players.

Once you get beyond the basics, however, things start to get rather more involved. Combat is handled with an action-point system that gives a huge range of options, from casting spells to putting an enemy in a chokehold. It’s a wonderfully detailed arrangement for those who crave a bit of simulation in their gaming and are willing to put in the time to really get to know it, but it’s far from lightweight or fast-flowing.

Indeed, that description could probably be applied to much of the weighty rulebook. Sometimes this at least feels somewhat justified, such as the nine separate methods of healing, which range from smelling salts to open surgery. Other times, it feels like detail for the sake of detail. Characters can take a talent, for example, that determines exactly how many pages of text they can read in a minute. It’s honestly hard to imagine exactly what end-goal this level of granularity serves beyond contributing to the near 700 pages that make up the rulebook.

Flames of Freedom is a game written with heapings of passion and a dogged kind of dedication that oozes from every page. It’s a labour of love, and if you’re willing to let it carry you away there’s a solid core of historical adventuring to be found. Once you reach beyond that juicy heart, though, it’s flow can be slowed by a network of subsystems and narrow rules that require you to either ignore them and make a quick-fix ruling, or play with the rulebook open on your lap.

Yes, it’s a shade unwieldy, especially if your preferences lean to the lightweight, but if the setting and core premise of Flames of Freedom strike a chord in your soul, and the idea of taking a fresh perspective on the era appeals to you, this could easily be a game that sucks up hours and hours of blood-spattered entertainment. 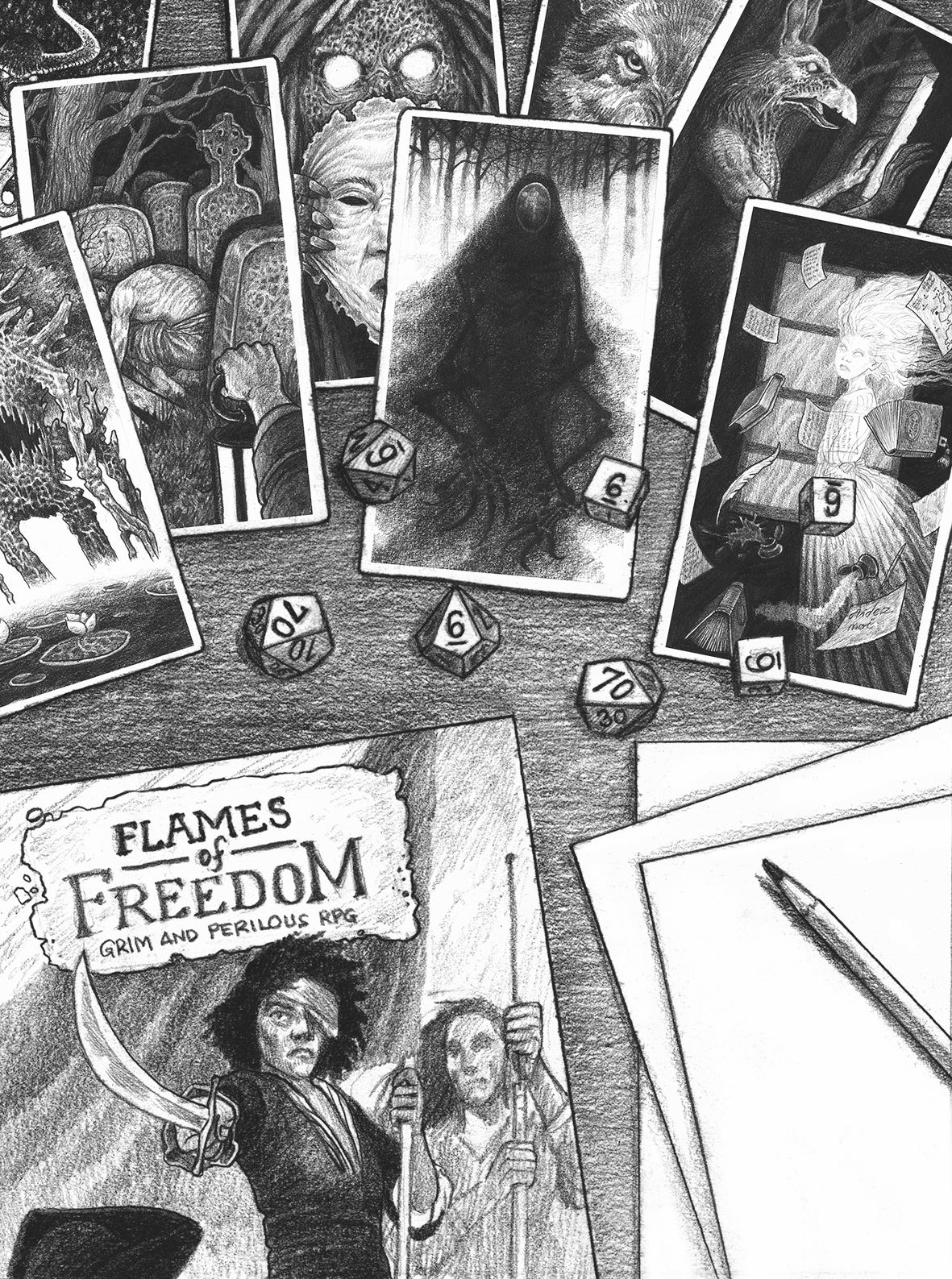 Richly detailed and stuffed with information, Flames of Freedom is a hefty package to handle

TRY THIS IF YOU LIKED Zweihander

Already being familiar with the system is going to take a lot of the edge off Flames of Freedom, and get you into the game lightning-quick