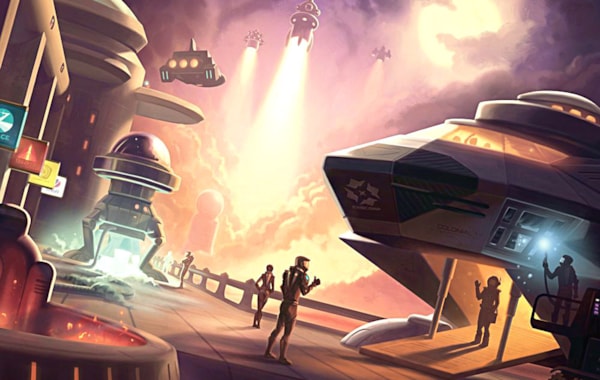 Farlight is a Kickstarted piece of science-fiction shipbuilding, set on the eponymous station on the edge of explored space. In high-concept terms it’s somewhere between Terraforming Mars and Galaxy Trucker, only much lighter than the former and less funny than the latter.

It’s played in three-stage turns: all players blind-bid for ship pieces, resources and actions, then build their new bits onto their ships, and finally try to complete missions for big victory points. The blind bidding is a clever mechanic with opportunities for bluff and strategy. It lies at the heart of the game, but largely because the other two stages aren’t as interesting as they ought to be.

Your ship is both an exploration vessel for completing missions and a simple engine for generating more resources each turn, in a way that reminded me of Splendor by way of Pipe Mania. Nothing bad will happen to it, beyond realising you’ve built a gravity generator where you should have left space for a primary core.

You complete missions by having enough resources (including crew, who are worryingly expendable), until one of the climactic (highest-value) missions is completed or the game runs out of parts. The missions ought to drive the game but they’re dry and don’t link to create a sense of purpose. In Terraforming Mars you feel like you’re affecting a planet. In Farlight you’re just collecting victory points.

This is a bright, shiny, good-looking version of the future with interesting mechanics, but without enough scarcity, tension or danger to make it a real challenge. It’d be a tidy sci-fi ship-builder if Galaxy Trucker didn’t exist.

Get your copy here