Conquer the land using fantasy creatures in this intriguing title

Ethnos makes a strong first impression out of the box. Artist John Howe’s detailed artwork for the 12 factions vying for control of a mythical kingdom helps to alleviate the fantasy stereotypes – elves, trolls, giants and orcs are all present and correct – while the brightly-coloured design of the cards and circular control markers hint at the lively battle to come.

In a particularly neat touch, there’s a number of extra boards and tokens that only come out to play when certain races are included in the six randomly selected for each match, providing a nice level of variety whether you’re trying to impress the merfolk to progress up their dedicated board or amassing the largest army of giants to swipe the points-scoring token off your rivals.

Ethnos’ core gameplay comes down to a simple idea: bigger is better. Players can draw cards from a deck or choose from a selection of face-up cards discarded by other players each turn, building their hand up until they can place down a ‘band’ of cards that match either species or location.

Each band can be used to place another control marker on one of the six regions, which score a random amount of points for the dominating player during each of the three phases, but must have more cards than markers currently on that location. (One of the best elements is that skeletons can be summoned to plump out any army to conquer a region, but crumble back to dust before points are scored for size.)

Taking over areas is in many ways a distraction, as the most effective way to rack up points is by laying down the biggest armies possible, which score increasing amounts of points at the end of the round. Any cards not included in the band must be discarded and can then be picked up by other players, making holding out for another matching card potentially risky as it could hand an advantage to your rivals. 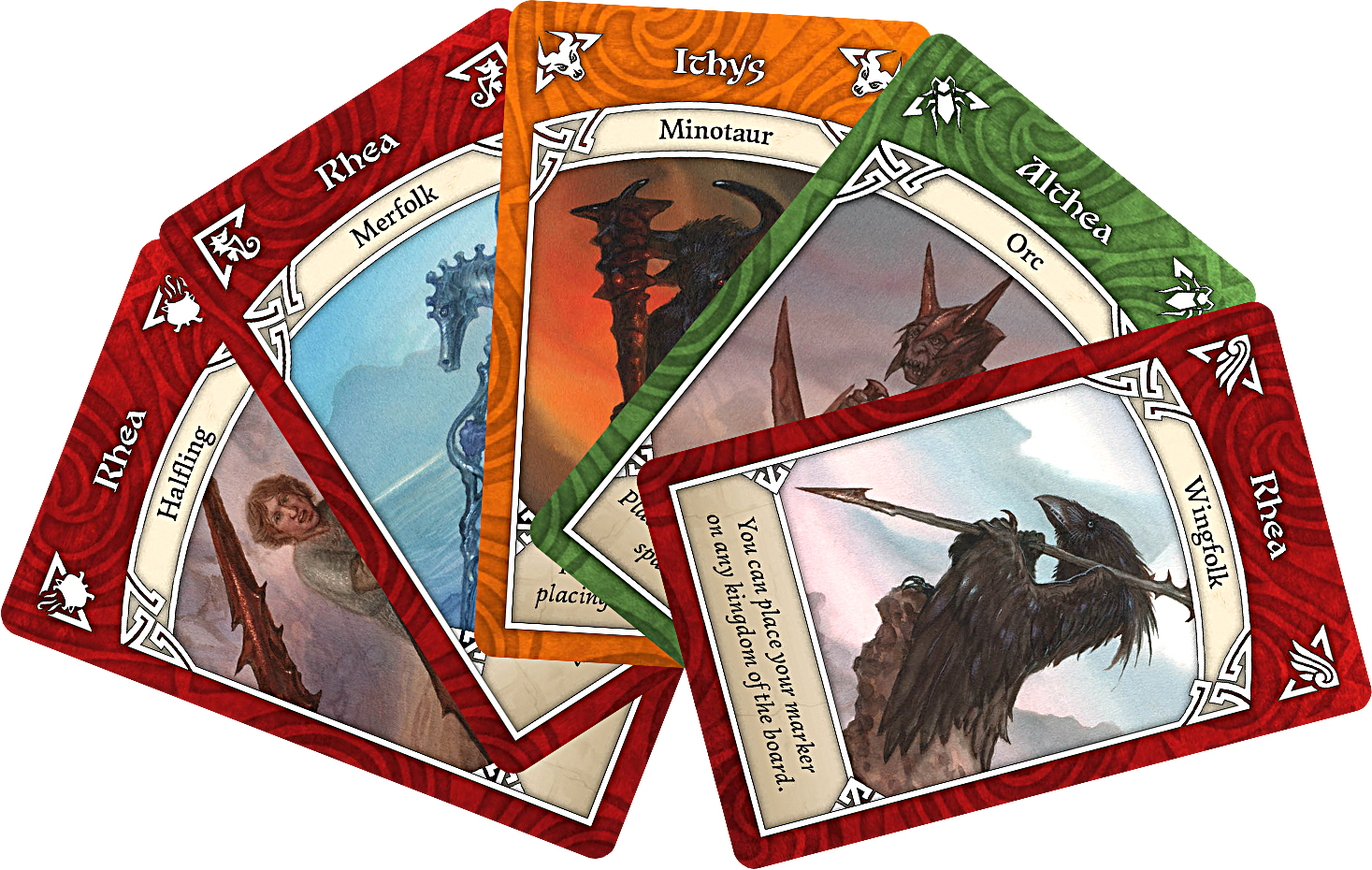 The leader of each tribe denotes the location that must have a marker added and activates a faction-specific power. These powers make for a different style of play each game, with the centaurs’ opportunity to play multiple bands in a single turn and the elves’ ability to hold onto cards without discarding particularly changing the game drastically, as they all but remove the need to consider what you will lose by holding out for an extra card or playing a band from a bigger hand.

Even when playing with other races, the face-up selection of cards quickly vanishes and it often becomes a case of drawing randomly from the deck until you hit the ten-card hand limit and lay the biggest force you can, selecting the leader than makes the most sense from the line-up you happen to have.

There is a level of strategy to the factions, and an interesting enough selection of different quirks (halflings cannot place markers so are generally fodder for huge armies; laying enough merfolk grants the placement of a free marker, undermining the need to outnumber hotly-contested areas) to avoid it becoming a game of simple luck, but it lacks the decisive tension of better games that use a similar card-drawing format, such as Ticket to Ride.

Ethnos’ many interesting ideas are let down by a forgettable theme (despite the favourable presentation) and a failure to fully wring the fun and challenge from its use of unique factions. Rather than showcasing gameplay that feels fresh and challenging with each combination of creatures and the varied strategies they allow, it descends into a back-and-forth of drawing cards and being pleasantly surprised when luck is on your side.

Ethnos buries its unique concepts and engaging implementation of different factions under gameplay that fails to present enough interesting decisions from turn to turn, instead becoming a game of drawing cards and seeing how your luck turns out. It’s a shame, as there’s smart and gripping design underneath.