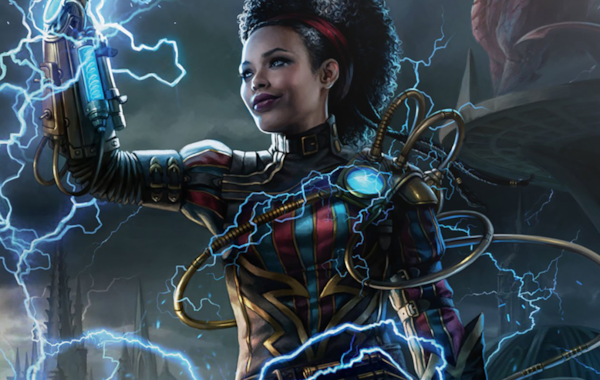 How does the world of Magic: The Gathering fare as a roleplaying setting?

It’s hard to imagine why it took so long for a setting stuffed with mad science-wizards, demonic jesters and a ghostly mafia to find its way into D&D, but while Guildmasters' Guide to Ravnica is undoubtably a blast from end to end it struggles to dive into the details that DMs need to run a living campaign.

The sprawling metropolis of Ravnica first saw light as a setting for the Magic: The Gathering card game, establishing a strong tone stitched together from steampunk and fantasy tropes. On its own this would be enough to set the world apart from the Forgotten Realms, the high-fantasy default setting of the current edition, but perhaps the most unique aspect of Ravnica is the titular guilds.

Rather than any governments or countries, these ten enormous organisations take the lead role in running the city, handling everything from finance to the military. If you’re adventuring in Ravnica you’re almost certainly going to be working for or against some of the guilds.

Fortunately this is something that the book handles well, laying out neat summaries that include solid guild-based backgrounds for players to choose from. These backgrounds come with plenty of benefits, including extra spells, which encourages players to pick an allegiance early on.

In fact, in terms of raw mechanical content Guildmasters' Guide to Ravnica is solid throughout, with long sections laying out creatures and monsters unique to the plane as well as a heaping of flavourful magic items.

However, while the surface-level information about the great city is stellar – the art is beautiful throughout – it all feels a little shallow when you come to plot an actual adventure there. It’s clear that Ravnica is a realm that was never intended to live and breathe in the way that you’d expect from an RPG setting, and while Guildmasters' Guide to Ravnica goes some way to ironing this out there’s still a lot of work for the DM to do.

It’s a well-designed book that’s packed with inspiration and ideas, and if your gaming group also dabbles in Magic: The Gathering you need to pick it up as soon as possible. Otherwise, it’s a fascinating world to dabble in and borrow from, but falls just short of being a viable plug-and-play setting.