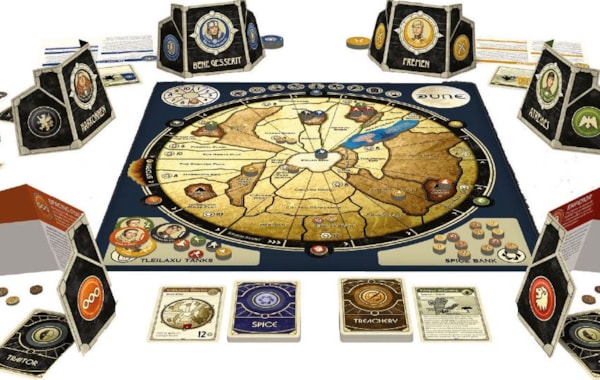 Sand, spice and everything ni– OH GOD A WORM

After 35 years effectively lost from the tabletop, Dune is finally back. Designed back in 1979 by the creators of the seminal Cosmic Encounter – one of the most influential and greatest games of all time – the tabletop adaptation of Frank Herbert’s sci-fi doorstop is similarly held up as a masterpiece of playerdriven interaction and asymmetrical gameplay. So, how does the classic hold up today, four decades on?

Very well, as it happens. This 2019 edition isn’t quite the original game remade, but it’s close. The changes are mainly efforts to tighten up the overall experience (though it still runs long) and make clearer some of the infamously loose rules created by Dune’s unique factions, which revel in the way they offer exceptions to the core loop of bidding for treachery cards, deploying forces on the surface of Arrakis to seek out valuable spice and battling with each other for control of the sandy planet’s main strongholds using the game’s costly luckfree battle wheel system, where troops lend their strength by dialling in how many you’re willing to sacrifice. It’s a testament to its innovation at the time that the largely untouched gameplay still excites and entertains throughout its lengthy playing time; the multiple hours slide by in fits of laughter and outrage alike.

Although you can get by with a couple of empty seats, the way the six factions differ and interact makes a full table the absolute best way to play, providing the friction necessary to have sparks fly as players make and break alliances in pursuit of victory. Whether it’s the Fremen control of the deadly storm that circles the board and the sandworm that bursts up to devour forces, or the Bene Gesserit ability to briefly take control of opponents’ combat preparations and pull a surprise last-minute victory by predicting the winner hours beforehand, the relatively simple fight over control of the board is lifted by its ripeness for off-the-table social confrontation, diplomacy, betrayal and sudden moments of reversal and surprise.

The factions all have an equal shot at victory if played right, but Dune isn’t a fair game per se; even with its fragile alliances limited to two people in the new rules (the uncapped teams of the original are an ‘exotic’ variant), it’s a game that finds its unforgettable highlights in seeing your leader suddenly poisoned or revealed to be a traitor, your all-out attack fall prey to a lucky defence card, your former ally turn against you to chase glory alone, and a wickedly compelling maelstrom of chaotic situations and swings in standing. Its advanced rules unlock its full power and exhilarating lopsidedness, at the cost of a more punishing need to carefully manage the spice economy to upkeep your forces and fiddle with slightly more rules; a worthwhile trade-off, even if there’s a definite purist appeal to the ‘basic’ mode and its more reasonable play time. Like modern asymmetric successors like Root, it takes multiple plays with each of the factions to properly appreciate their place in the world  so playing with total newcomers or those that struggle to get into the ‘character’ of their faction can be a steep hill to climb.

With a full table of the right people, Dune feels less like a relic of gaming past that’s been frozen in time since 1984 and more like a game that could’ve been invented in 1979, 2019 or 2059 and still feel as brilliant. Like Cosmic Encounter, it’s an experience that’s been often imitated in the decades since, but never quite replaced. This beautiful new edition is a fitting tribute to a game that deserves to be discovered (or rediscovered) by more players who've missed out on 35 years of chaotic fun.