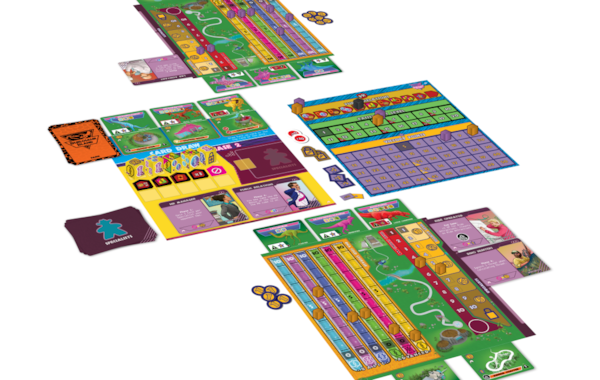 Dinosaur Island for just a pair-odactyl

Welcome (back) to Dinosaur Island. Oh cripes, the T-Rex has escaped and gobbled up all of the meeples – and half of the players.

Yes, Duelosaur Island (honestly, we can’t decide whether it’s a name so dumb it’s genius, or so dumb it’s dumb) is Dinosaur Island with its DNA reconfigured from an up-to-four-player worker-placement board game to a two-player-only drafting card game. (A solo mode is included, though it’s not the preferred way to play.) There’s plenty you’ll recognise if this isn’t your first trip to the park: the gaudy neon colour scheme, each player’s DNA tracks, the specialists who should really find a new workplace and, yes, the endless puns and Jurassic Park references spread across the deck of dinosaurs and visitor attractions.

While the meeples – human or dino – are nowhere to be seen, Duelosaur does preserve the amber-coloured dice of its predecessor, which here serve as the main focus of the gameplay. You bounce back and forth each round, drafting either a die – plus its attached bonus, which might multiply its value or add other benefits, such as coins or extra DNA – or one of two specialists into your park. There’s no need to worry about arranging paddocks of Pachycephalosaurus this time – after you’ve mixed up their particular DNA cocktail, the dinos from your hand neatly slot above your board, one half of the smartly designed double-ended cards that can function instead as attractions when placed below the board.

What you will need to concern yourself with still is the threat of dangerous dinos breaking out and turning visitors into the fleshy equivalent of Pom-Bears, balancing your security level against the threat of your prehistoric menagerie’s inhabitants, as well as the shifting threat added by the leftover card or die each round – something that can be used to screw your opponent with a potential lawsuit if their chain fences are looking a little rusty.

Duelosaur leans nicely into its head-to-head feel with some more direct player interaction, such as the PR bonuses granted at the end of each round – the lowest-scoring player picks first, and can limit the options available to the leading player by choosing a smaller reward themselves. The game makes the most of its stripped-down contents, with every card having at least two potential uses – often an ongoing benefit or a more immediate boost – and playing into a set-collection element during scoring.

The simplified drafting round and simultaneous park management keeps the action moving along, with the fast momentum and moment-to-moment decisions sometimes more comparable to the ramping pace of an engine-building game than Dinosaur Island’s slower and more methodical long-term strategy. What Duelosaur loses in depth, it handily makes up for with speed and simplicity – and you still get enough of that incredible theme to sink your teeth into, even if it’s not quite as meaty.

Where Duelosaur lacks a little is in the small details. There are more than a couple of awkward design decisions – regularly requiring the PR track marker to be moved to see what’s underneath it, an illogical placement of visitor icons on the dinosaur cards, poorly explained rules, a lack of a player aid on the boards – that cause the otherwise fast pace to hitch up at points. They’re minor gripes, many of which dissipate once both players have a couple of plays under their belts, but they’re gripes all the same – and ones that could have been easily solved.

Ultimately, Duelosaur Island does exactly what it sets out to do: give you a flavour of its bigger sibling without feeling like half the fun. The gameplay shift and smaller, well, everything makes it enough of a standalone experience to enjoy alone, even if you might find yourself craving the full park tour afterwards.

It’s not as good as Dinosaur Island, but it ain’t half bad either. The card and die drafting is engaging, with the clever multi-functionality of cards providing plenty to think about in a small package. And who can resist that theme?