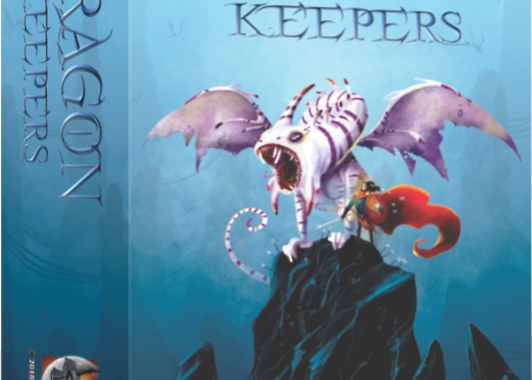 Save the defenceless dragons from rampaging humans – wait, what?

‘Wow,’ I thought, ‘that cover looks like it could be from the How To Train Your Dragon books.’ It turns out that’s entirely deliberate. Dragon Keepers is either a love-letter to How To Train Your Dragon, or what happens when you spend a while developing a game based on a series of books and then discover you can’t get the licence.

It would be easy to dismiss the game on that level until you realise it’s by Vital Lacerda, designer of The Gallerist and Lisboa, both in the BoardGameGeek top 100 of all time, alongside his teenage daughter Caterina, who according to the game’s Kickstarter page is a big How To Train Your Dragon fan, which explains a lot.

Dragon Keepers hews close to How To Train Your Dragon, in set-up at least:  a small community where humans and dragons live in harmony (less Viking than the books and films), and hunters are attacking the dragons, and it’s your job as keepers to defend them. The game has two flavours: Keeper Mode, which is short and competitive; and Dragon Mode, which is longer and co-operative. Both games share a similar structure, and most of the same components.

Keeper Mode is a disappointment. With the six dragon tiles on the table, each turn the NPC hunter targets some of them, and then the players each secretly choose one to protect. Unprotected dragons take a hit, and if a player is the only one to protect a particular dragon they put one of their shields on its card. Game ends when a dragon is defeated or one player gets three shields on different dragons, and the player with the most placed shield tokens wins. This is so thin, arbitrary and unsatisfying in play that it feels like it’s mostly in the rulebook to fill space, or as a tutorial for...

Dragon Mode, the main event, is a much more meaty affair. The six dragons form a circle, and the hunters go in the middle. As in the Keeper Mode, the hunter’s dice determine which dragons are getting attacked, and then players secretly choose which dragon to protect, but now with what action to take – defend, heal, train or attack.

Training flips a dragon’s card over to its hostile side, it can only attack after it’s been trained, and each dragon has a special attack power. Healing and training will also gain you magic cards to use in subsequent turns. You win if a certain number of dragons have attacked the hunter, and you lose if any dragon gets knocked out or if the magic deck runs out of cards.

This is where the game came unstuck for us. There are 18 magic cards, which means that between them the players can only do 18 heal or train actions before the end of the game. This locks in the tactics you need to win: you can’t dawdle around keeping the dragons healthy by defending and healing, you have to go for training and attacks as soon as you can, risking the health of your scaly pals. That ramps up the danger levels but means you can’t explore the mechanics to find other paths to victory, because there aren’t any.

There isn’t enough here to satisfy Vital Lacerda’s fans, and too much fiddly detail for more casual players drawn in by the attractive dragons. It’s a game of two halves that never come together to make a satisfying whole.

There are tactics and strategic thinking aplenty in the main game, but there’s also too much blind luck, and the built-in time constraint means if you stray off the only path to victory, you lose.

TRY THIS IF YOU LIKED Dragonwood...

If you liked Darren Kisgen’s push-your-luck game of questing adventurers but wanted more strategy and more dragons, this’ll tame you.