Doppelt So Clever (Twice As Clever!) 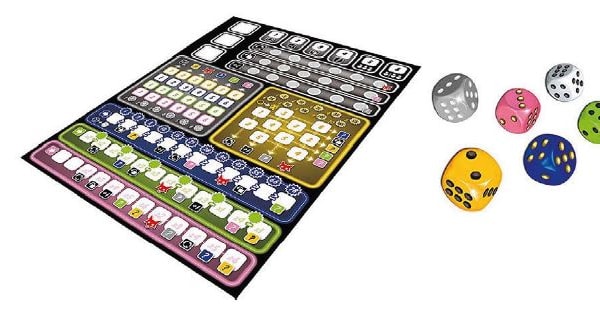 Buy your copy of Doppelt So Clever from us here.

The follow-up to last year’s ‘pretty clever’ roll-and-write smash hit Ganz Schön Clever, Doppelt so Clever might not be twice as clever as its astute predecessor – but it’s still an impressively smart next move for the series

There’s a little more to wrap your head around here than in Ganz. You still chuck dice and choose which to jot down on your sheet carefully – sticking lowervalue cubes on the box’s silver platter for your opponents to pick at – but the different placement and scoring hoops to jump through have been remixed and expanded in a way that makes Doppelt a satisfying and natural step up for masters of the original.

The most significant and interesting addition is a silver die, which lends a literal silver lining to sacrificing lower rolls to the platter – with the die counted as a wild colour, you get to check off every other die you send to the tray by claiming the cube, scoring for fuller rows in the silver area. With timing key to making the silver die most beneficial without leaving yourself with chaff or handing too many valuable dice to your opponents, it’s an excellent new mechanic that opens new strategies up without straying too far from Ganz’ highly enjoyable blueprint.

Poor rolls and losing dice to the tray aren’t quite as limiting as before, either, with a new bonus power allowing players to return cubes from the platter back to their available pool. Even so, changes such as Doppelt’s remixed yellow area – which requires checking off numbers twice to score them – mean that there are even more tricky decisions involved in pushing your score as high as possible, making the added control over your dice a welcome balance to the more complex placement rules.

Ganz was one of the best games of last year. Doppelt is more of what made that game so great, but with some welcome extra layers of tricky decisions. If you’re totally new to the series, the slightly simpler Ganz is probably still your best starting point – but this is a fantastic and worthwhile follow-up when you feel you’ve mastered that game. Go on, make yourself feel clever again.

Buy your copy of Doppelt So Clever from us here.