District 9: The Board Game, is from a different time. Drawing a card called ‘Fake News’ – intended as a light barb and to elicit a smile or two from the table – tells you exactly when this game was conceived. And it feels, forgive me, a bit alien.

Players take the role of one of the four factions in the box, the MNU (police), the Army, the human gangster gang, and the prawn gang (not to be confused with the unorganised prawns that spawn when you’re aggressive). They then spend their time moving around collecting and evicting prawns from their houses to gain their tech – which functions as a resource for playing cards to upgrade your vehicle. These upgrades and tech tokens also represent your health – with bits being bashed off if you lose an engagement. Most actions involve flipping a card or searching for something, and then there’s a couple of event decks too. 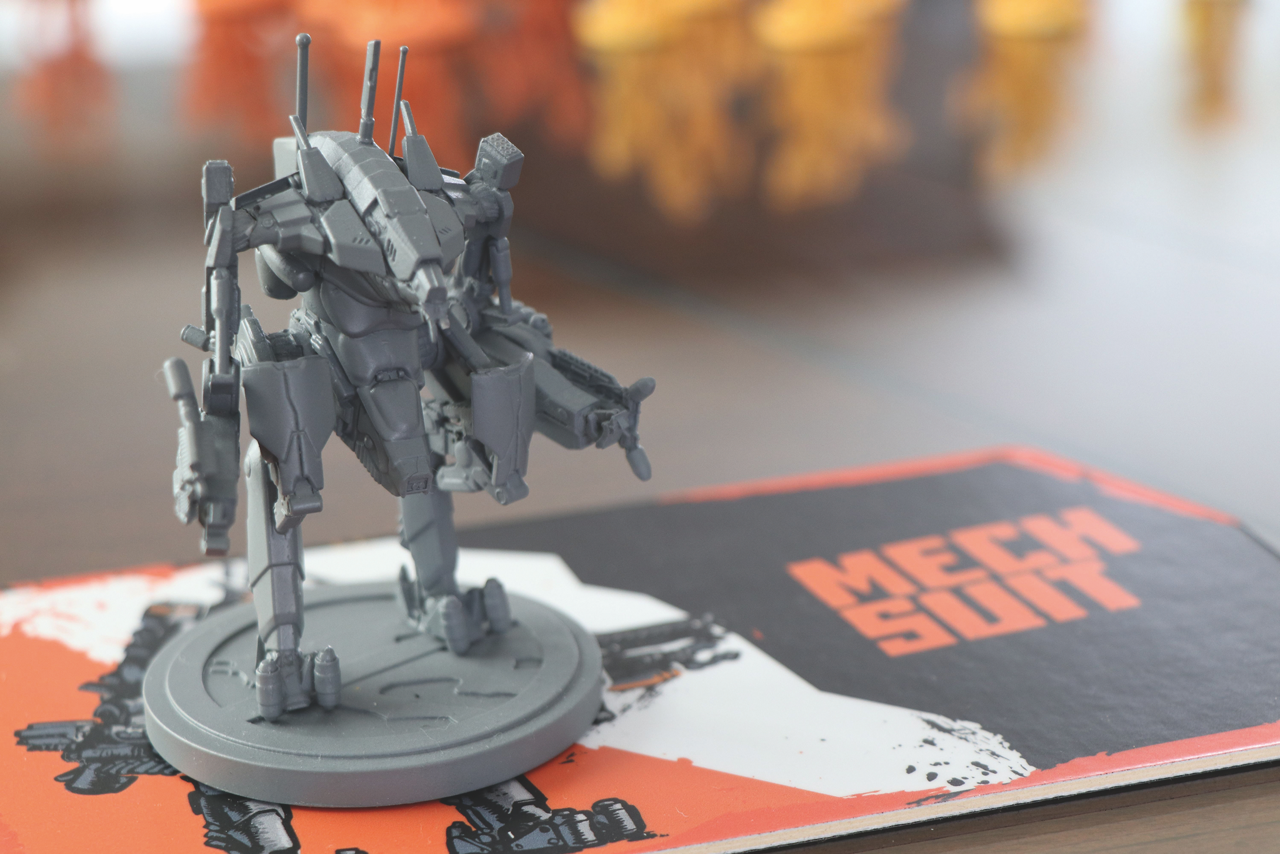 District 9 has a three act structure, mirroring that of the film. The first sees Wikus, the star of the film and an NPC here, searching for the alien cannister. Once it’s found we flip to day two, with a whole host of dangerous and interesting NPCs landing on the table, but most importantly CJ, the alien scientist who Wikus has to meet in order to find a ‘cure’. Day three is the climax of the film with the Wikus controlled Mech landing and creating an explosion of conflict. Do damage to weaken it, and then collect the tech tiles that fall off it.

It’s meant to create a sense of a situation in flux, to create drama and a sense of urgency. The players are in control of Wikus on their turns, so they could, in theory, play keep away while they get powered up by collecting more tech tiles, or attempt to incite a riot through extra evictions. Later, amongst the prawns rising up against the player factions, the new aggressive NPCs are meant to create more pressure, and finally, the mech battle is designed to force the players – assumedly antagonistic to one another – to work together.

Yet it doesn’t do that, sadly. There are so many tools here for players to muscle in on one another – through attacking directly, or laying a trap, or moving the enemies towards their opponents at the event phase on their turn – that they get in the way of one another.

The escalating of the unrest meter – which will power up the local prawns and maybe interrupt your plans with a riot – does its job, you will be overwhelmed. The rules themselves contribute to this, with multiple points of admin to move NPCs, to have prawns engage the player vehicle, or to resolve an event.

It’s a beautifully produced game – the sculpts are great, especially considering the delicateness of the source material. There’s a lot of love for the film in the box, and despite suggesting it’s a little out of time, there is humour here. It’s just not enough amongst the mess of the actual gameplay, which draws the game out longer than it’s welcome. One for collectors only.

For most, this is one to miss out on. But if you’re a huge fan of the films or a dedicated miniatures painter (or both), then there’s plenty in this box to get stuck into – even if it’s not the game itself. If you’re willing to dig into the BGG forum for the fan-updated rules, you may also have a better time.

TRY THIS IF YOU LIKED Nemesis…

If you’re looking for beautiful miniatures, tactical play and opportunities to mess around with those around the table, play Nemesis instead.