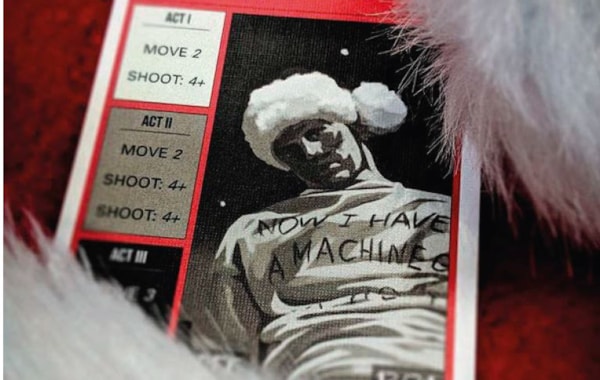 “Twelve terrorists. One cop. The odds are against John McClane… that’s just the way he likes it.” So the original tag line went, when the Bruce Willis-starring high-rise action thriller Die Hard hit cinemas back in 1988. Now, thanks to the OP Games, we can nostalgically relive that hardy, resourceful and wisecracking New York cop’s first adventure in tabletop form. It comes fitted out with some very impactful, Mad Men-style silhouette-based graphic design, a Hollywood appropriate three-act structure (each act expanding the fold-out board, giving a pleasing sense of escalation), and components liberally festooned with the film’s most quotable lines.

Given the one-man-army theme, designers Pat Marino and Sean Fletcher have appropriately fed McClane’s heroic struggle into an asymmetric one-versus-many structure, similar to the recent Jaws game, except this time the team of one-to-three facing the lone player take the role of the villains, rather than the heroes.

Each turn, every player throws down a single action card; McClane from a hand of five, drawn from his own act-specific deck which also represents his health, and the thieves (they’re not actually terrorists, of course — spoiler alert!) from a hand of three drawn from a shared deck. Appropriately for a character scrambling to survive, the McClane player has to be more careful about their card management. Anything they play will be saved and shuffled into future act decks, so they need to keep an eye on which act-specific actions might later prove useful. But once they’re down to two cards in hand, they have to discard those and redraw a whole new hand, inevitably losing some handy actions.

The thief players, meanwhile, have to coordinate using minimal player communication, not only to select the best fly-in-the-ointment swatting actions, but also the best combinations of numbers (found in the top-left corner of each thief card) to crack the codes on six vault locks, represented by a randomly assembled grid of numbers. This is the thieves’ win condition (in addition to blowing up the building’s roof in Act III), unless they kill McClane first by whittling down his draw deck.

Both sides have a trio of objectives per act. The thieves’ are optional, but always useful, giving them extra lock-breaking actions. McClane’s are compulsory, the only way he can trigger each new act and ultimately win the game. By moving, shooting, shoving, punching and sneaking his way around the impressively expressionistic board, he must pull off such plot-based achievements as finding a pair of shoes (that don’t fit), throwing a thief out of a window, and scaring the hostages off the roof.

While the game’s fidelity to its source’s storyline is admirable, this does make it very linear, and replays become repetitive, although switching sides does change it up a little. Also, for a movie which is all about one guy winning against all the odds, it does seem considerably easier to win as McClane, especially as he essentially levels up during the three acts, while the code-cracking is far more of a slog for the thieves than their bare-footed foe’s tasks.Even so, if you’re a gamer who won’t stop quoting Hans Gruber, this would still make a great Christmas present.