Based on the hugely popular and long-running Italian comics from sisters Angela and Luciana Giussani, Diabolik: Heists and Investigations is a hidden movement game following the criminal antics of the masked anti-hero and his romantic accomplice Eva Kant. One or two players will take on the roles of Diabolik and Eva, as they attempt to steal three precious items from certain locations surrounding the fictional town of Clerville, whilst an opposing team directs Inspectors Ginko and Morrigan across the map, chasing clues and ultimately apprehending the duo.

Both teams will be working to sequentially fulfil the goals on the three chosen Heist and Investigations card, with the Criminal player winning the game after completing two. Criminals must fulfil certain criteria (usually discarding Crime cards at specific locations) to complete the three goals on each card, whilst the Police pursue their own trio of goals, with each one nudging the Danger track toward Diabolik’s capture.

Unlike the usual one versus many format of other hidden movement games, Diabolik emphasises team-play from both sides. The rules for two players work fine, but it’s this team format that really make the game’s mechanics shine and stand out amongst similar games. Criminal players will have the ability to trade cards and split up across the map to aid each other, and independently progress through the steps of any of the heists. This interaction evokes the theme nicely and is a satisfying contrast to the usually lonely role present in most games in the genre. 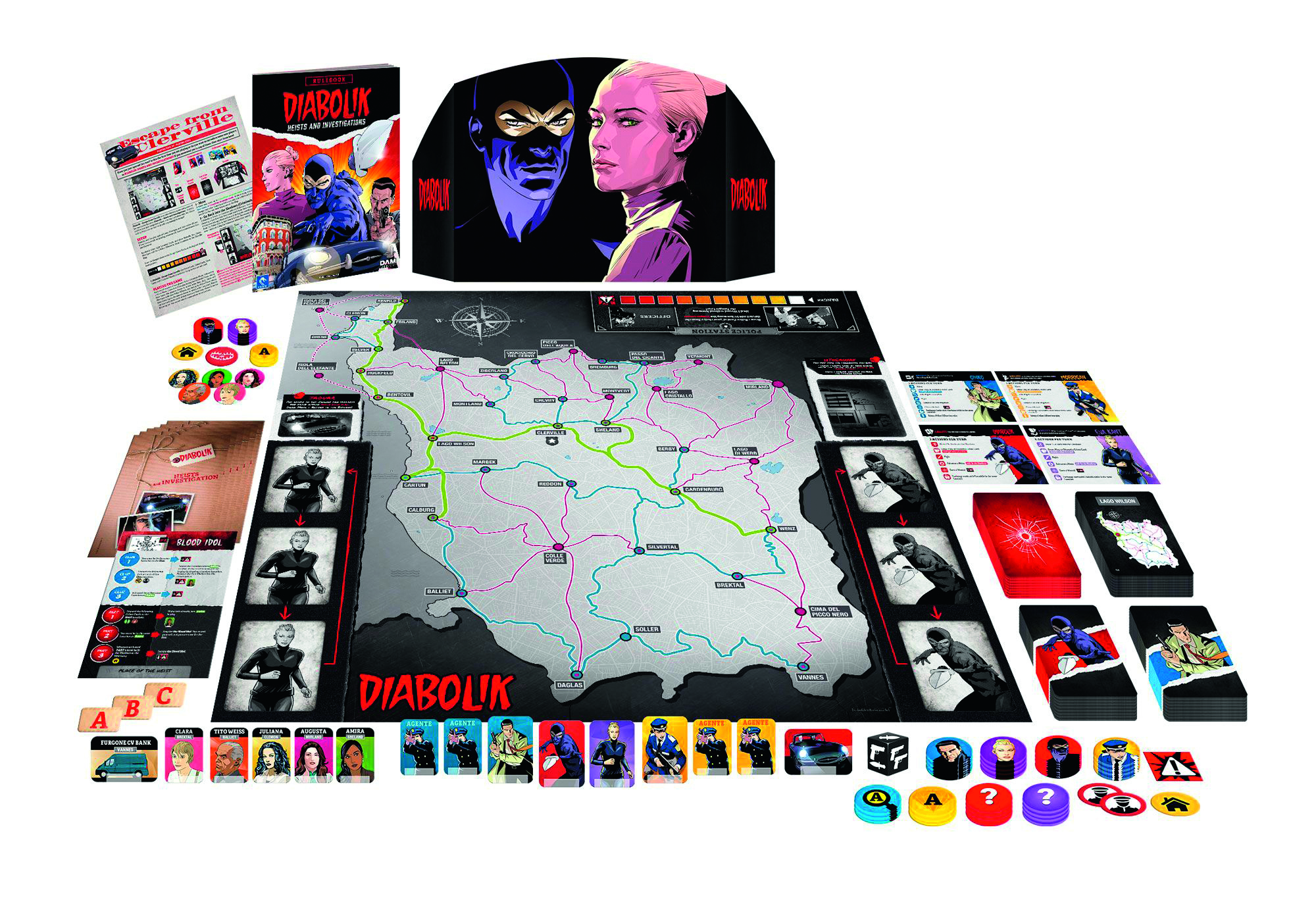 Team play also opens up strategies of evasion and distraction, whereby one player lets the opposition give chase whilst the other furthers their goals within the shadows. In a nice bit of functional design, a comic strip hidden behind the player screen provides useful prompts, enabling the criminals to communicate non-verbally simply by pointing at certain panels.

There’s plenty of notably impressive aesthetic choices elsewhere too, particularly on the respective players’ Crime and Police cards. Aside from being gorgeously adorned with striking comic panels, these cards are absolutely integral to both sides’ chances of success thanks to the range of special abilities and items they offer. They also add some welcome bursts of theme to the on-board action as the larger Heist and Investigation cards themselves confusingly lack any contextual information besides their titles.

The actual hidden movement mechanics of Diabolik revolve around the use of location cards placed on the ‘In the Shadows’ track. It’s a mostly neat and refined piece of design, albeit occasionally cumbersome as players begin to switch between the two tracks and the various Heist or Secondary Character locations. Understandably, this is notably more difficult for the Police team to make any strategic sense of, and players engagement with this system will likely depend on their appreciation for the slightly higher amount of deductive skills Diabolik demands over other games in the genre.

Ultimately, it is worth noting that whilst my plays of the game undoubtably pale in comparison to the amount it was tested, there nonetheless seems to be some balance issues here in favour of the criminals.  One of our play-throughs ended in under twenty minutes simply due to a fortuitous randomised board setup which left the police severely lagging behind the unstoppable duo. After several plays, balancing out the win ratio between the two teams seemed unlikely. Then again, considering the source material, perhaps this is an intentional design choice and to be expected.

If you’re a fan of the comics and the hidden movement genre, Diabolik is likely an easy sell. If not, then there’s several smoother and more universally appealing titles out there.

TRY THIS IF YOU LIKED WHITEHALL MYSTERY

It’s a step up in terms of complexity but Diabolik offers a similar cat and mouse feel.