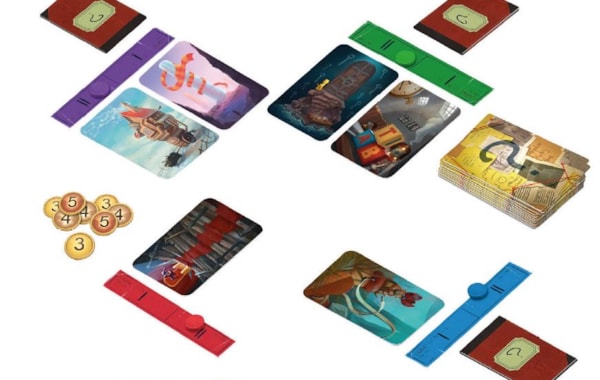 The team behind Mysterium have done it again

Detective Club was a hit at Essen, but that was Essen 2018 and it’s taken over a year for the game to get a proper release in the UK. Given its pedigree – it’s from the same Ukrainian publisher and one of the same designers as Mysterium that’s a weirdly long time, but the world today is a weird place and if I was them I wouldn’t be putting much effort into pleasing the UK right now either.

Mysterium was a brilliant collision between Cluedo and Dixit that created something greater than the sum of its parts. From its name you might think Detective Club was another riff on a ghostly murder mystery a whooodunnit, if you like – but you’d be wrong. It is, however, another game that owes a huge debt to Dixit. As in: another big deck of cards with surreal images on them.

I am not a fan of Dixit. I like it fine, with the right people and if there’s nothing more  interesting to play. It’s a game that’s fairly satisfying but never tense or exciting, and distinctly lacking in strategy or anything more than informed guesswork.

At first glance and even first play, Detective Club looks like Nevskiy has gone back to the Dixit mine that produced Mysterium and scraped the last of the ore from it. This time it’s the surreal cards smashed into the structure of a spot-the-conpiratorbefore- they-work-out-the-theme game like Spyfall or A Fake Artist Goes To New York.

It’s a really good fit. The surreal cards (brilliantly illustrated by the team at M8I Studio) introduce exactly the right amount of ambiguity for all players, on whichever side, to make even the simplest word into an interesting challenge. The genius of Mysterium lay in the enjoyment of watching people overthinking simple problems and the same is true here: at the moment the truth is revealed half the table slap their foreheads and wonder how they could have missed the obvious clues.

It’s quick to learn and plays reasonably fast, everyone is involved with every card-turn how does that image fit the theme? might that player be the conspirator? – and it makes you feel clever when you’re doing well, but not stupid when you’re doing badly. It demands a certain amount of focus and concentration, who ultimately wins is hardly important, but everyone will have had a good time. The presentation is polished and elegant, and this would be a nice thing to give to friends as a gift. Unless they already own Dixit.

Setting your game up against an established modern classic like Dixit is a fool’s errand. Dixit has the brand recognition, a Spiel des Jahres win, and cute rabbit meeple. Detective Club can only contend with nice wooden magnifying glasses, scoring tokens instead of a track, and places for two more players. And, I would argue, better and more enjoyable gameplay.

Yet it’s not a challenge to Dixit, it’s more like Dixit+, a game that can sit comfortably alongside its older sibling. You can even play it with your existing Dixit card-decks, if you want a quick expansion – or even the decks from Mysterium too. And while Dixit can run into problems if played with people you don’t know, this works equally well with friends, strangers or both.

Like Mysterium, Detective Club wears its influences on its sleeve but it’s much more than you’d expect from ‘Dixit meets Spyfall’. It’ll be interesting to see where Igames draw the inspiration for their next big release though if it’s ‘Dixit meets Monopoly’ I’m out.