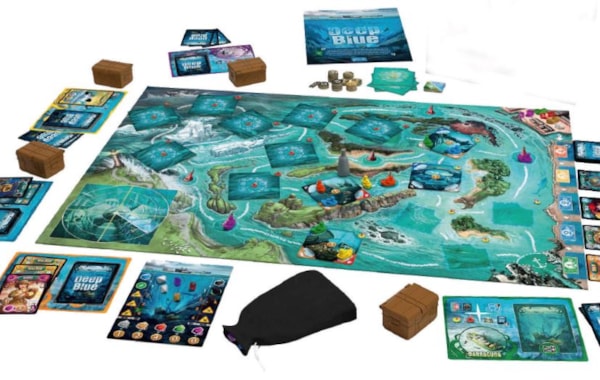 Deep Blue delivers glittering treasure from the depths of the ocean without leaving you gasping for air. A passion project six years in the making from designers Asger Harding Granerud and Daniel Skjold Pedersen – who continue to shine bright after this summer’s standout Copenhagen – Deep Blue is a peppy blend of a board-based race to fruitful diving spots, card-based deckbuilder as players hire crew to their boat and bag-based push-your-luck test as they scour the sunken wrecks for treasure. If that sounds like a design at risk of sinking under its own weight, no need for fear; Deep Blue’s approachable gameplay makes even the deepest depths feel like your local swimming pool.

Diving means drawing gems from a central bag until you decide your luck has been pushed as far as it’ll go. Surface voluntarily and you’ll score for all you drew; run out of air (blue gems) or encounter too many threats (black gems) and you’ll be forced to return empty-handed, with only the cards you cashed in during the dive giving you points. This means, one way or the other, you’ll rarely lose it all it’s forgiving enough to encourage risktaking and avoid annoyance over a dive scuppered by bad luck, without trivialising the consequences of ‘just one more’.

You likely won’t be diving alone. One of Deep Blue’s highlights is how social its bagpulls feel compared to the solitary token- fishing of other bag-builders like Spiel des Jahres winner The Quacks of Quedlingburg.

Players on the same diving spot can all cash in cards from their hand to rack up points as the ‘dive leader’ pulls gems from the bag, and those that last as long as – or outlast, if they have the right cards – the dive leader stand to benefit from all the gems pulled.

The collective nature of diving – boats on adjacent spaces can rush to join a dive, without the scoring bonuses for spending an action to 'scout' ahead – lights up the murky depths. There’s a delightfully tempting Deep Sea Adventure-ish risk reward to playing chicken with the black and blue gems, hoping to force your rivals to run out of defence cards and resurface, allowing you to claim all of the sunken treasure for yourself.

Extra crew members can be hired for each player’s boat by spending cards as cash; discarded cards are reshuffled and redrawn from each players’ individual decks, providing an engaging deckbuilding-lite level of ability to customise your available actions and scoring methods as you please each game. Crew occasionally add new gems to the shared bag, inviting a rush to hire occultists and archaeologists to make the otherwise worthless green and purple gems worth something, and allowing players to score from various gem colours and combos during dives – as well as keeping you recalculating the odds of the next pull.

The control over how you score and mitigate bad luck makes Deep Blue often feel more deliberate in strategy and less frustrating than several other push your luck games. Each wreck tile can only be dived once, creating a delicious tension between building up your crew cards to dive for longer and score higher versus the race to get to spots and clear them out before your opponents. The tiles are randomised each game, with the four ‘sunken city’ tiles that trigger final scoring coming with their own variable rules for some welcome extra twists every session.

The game does hit a few bumpy waves here and there. For all the efforts to the contrary, misfortune can still rear its head every now and then, making the effort to get to a diving spot that ends three pulls in feel wasted or one stonking run by an opponent feel hard to catch. While the game roundly looks fantastic, the gold and silver gems are tough to tell apart at a glance and the plastic chests used to hide point tokens are an unnecessary indulgence given that all scoring is open. The social pile-on of dives also makes it a more interesting game with more people, though the fixed number of dives gives it a different momentum with fewer, allowing players more time to build up their crew without worrying there’ll be nothing left .

On the whole, Deep Blue crests through these minor bumps to pull off an entertaining and engaging experience. The chances to jump in on other players’ dives and the shared agonising over whether to risk another pull from the bag keep everyone fixed to the table throughout.

It’s a lot of fun and like those twinkling gems you’ll find it hard to resist just one more go.