Dark Souls: The Board Game review Dark Souls is undoubtedly one of the greatest video games ever made. Infamously challenging and permeated by the enigmatic narrative of its gothic fantasy world, it’s an experience that rewards those willing to invest both time and effort to master its unforgiving – but fair – combat systems and unpick a rich story that is obtuse at best.

Dark Souls initially made its name on the back of its try-and-try again difficulty – it was advertised with the tagline ‘Prepare to die’ – that sees players drop all of their gathered souls, which serve as both currency for new equipment and the experience required to level up, upon death and lose them permanently if they cannot successfully fight their way back through resurrected enemies and reset traps to the spot of their last demise. What is key is that everything goes back exactly as it was, not unlike a virtual Rube Goldberg machine – you know that knight will ambush you from a hidden corner, so you can anticipate the surprise before it happens. You learn from your mistakes, correcting your strategy each time you die to progress a little further.

Dark Souls: The Board Game places this idea of ‘live, die, repeat’ at its core, offering up a dungeon full of enemies that must be conquered before facing a mini-boss and a final boss, both pulled from across the video game trilogy. While the dungeon layout and the monsters within are randomised during setup, they remain the same when a player dies, throwing the party back to the home bonfire and resetting all cleared rooms – as well as leaving behind any unspent souls, which can be cashed in between encounters to draw from a treasure deck of cards or level up characters. So far, so Dark Souls. 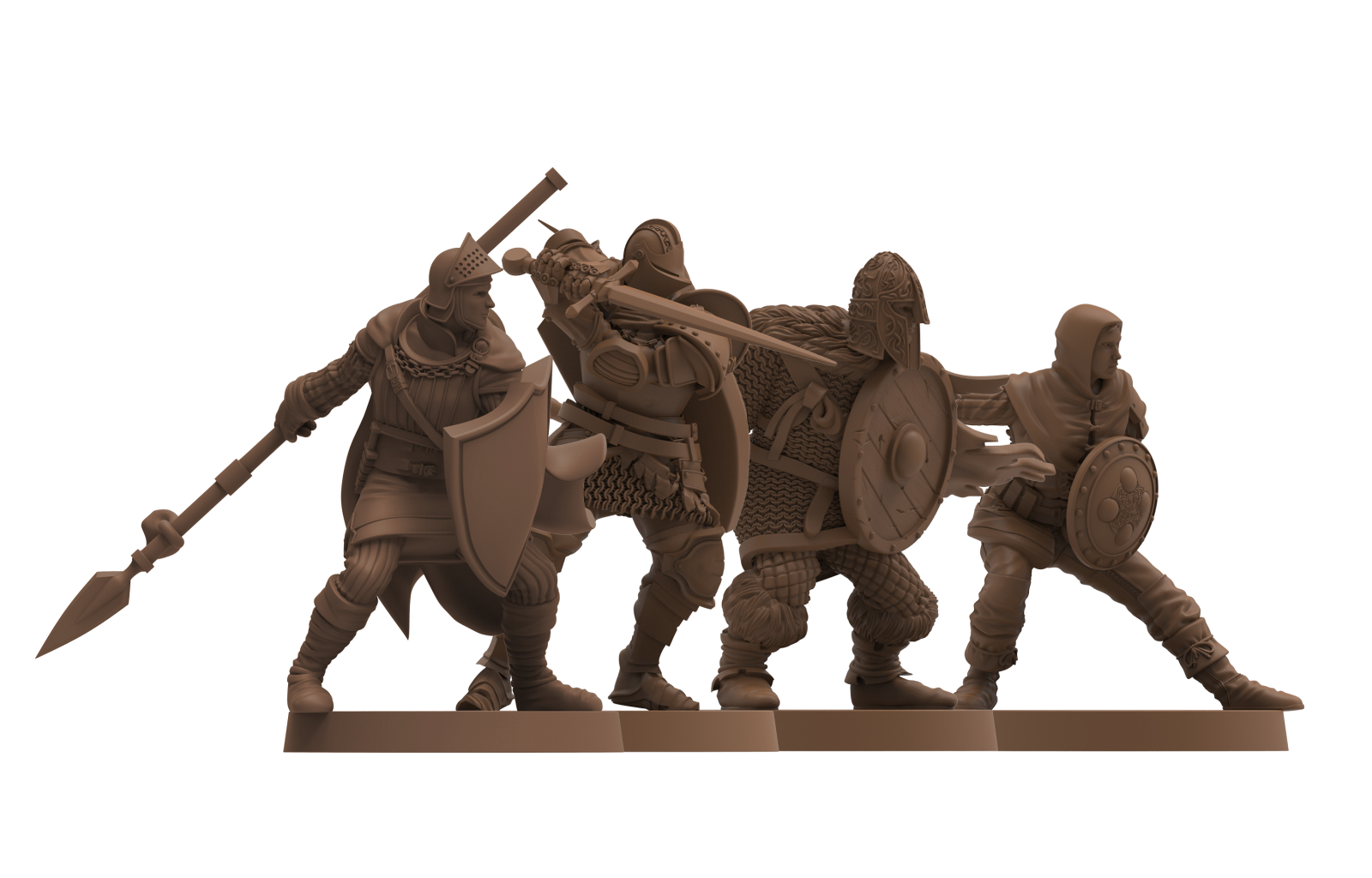 Where the board game falls apart in relation to its on-screen sibling is in the idea of repetition leading to player improvement. Dark Souls the video game has become a favourite of online streamers who have shown how even the hardest foes can be taken down with little more than a pair of pixelated pants and enough well-timed dodges and attacks, highlighting that skill is the trick. Dark Souls: The Board Game does away with much of this patient strategy, making combat rely on endless dice rolls that can see a party back on their bums by the bonfire after a few unlucky turns.

What further replaces the feeling of sweaty-palmed tension with sweaty-browed frustration is that all enemies act after each player’s activation, meaning that three- or four-person parties can see their teammates turned into human mincemeat between their individual turns (it's instant failure if one player dies) and the added downtime kills the feeling of a fast-paced dance with death despite an otherwise fluid node-based movement and attack system. 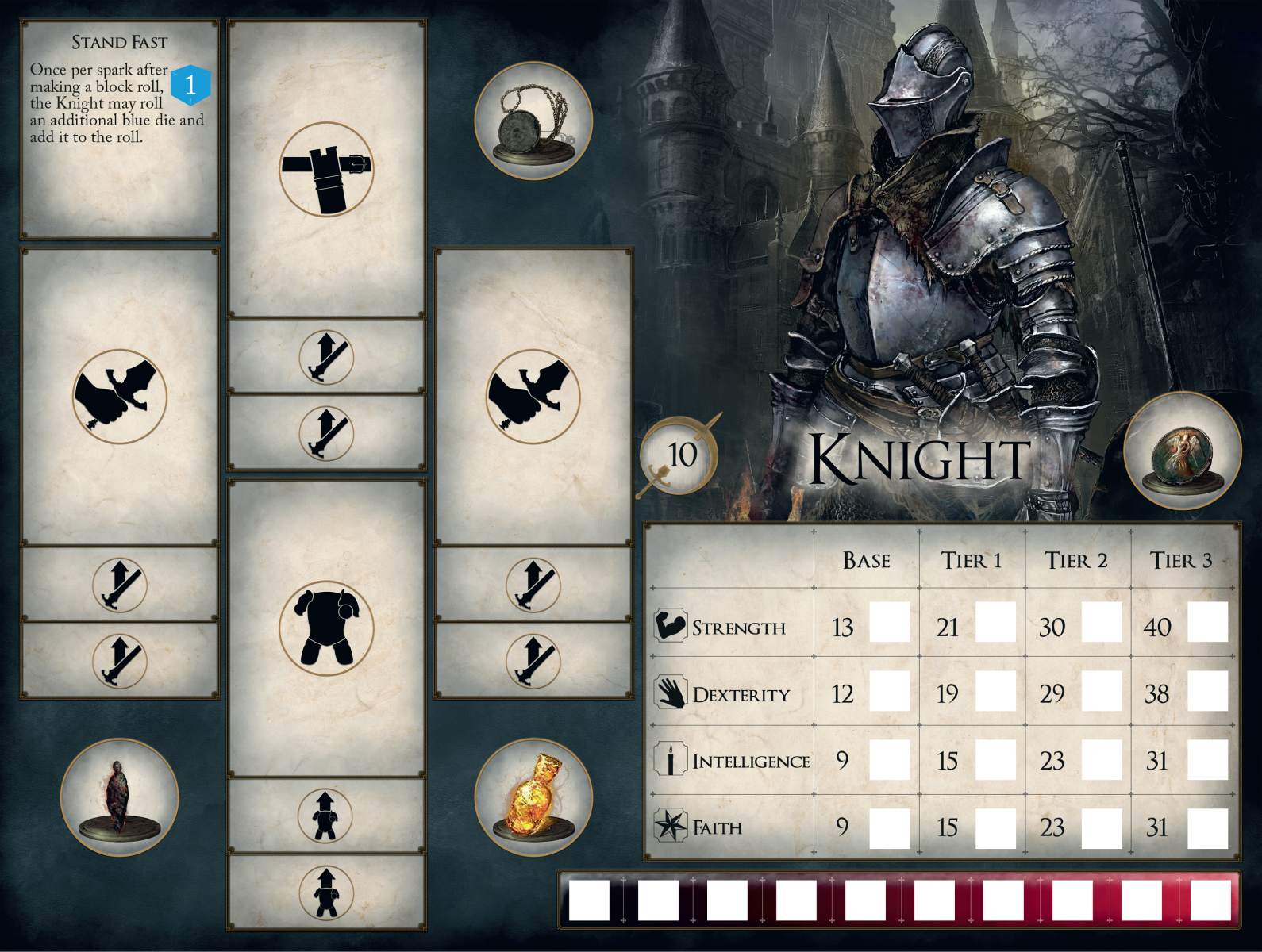 With so much coming down to luck, the only meaningful way to up your chances of victory is by grinding through battle after battle to earn souls and equip better treasure, which increases everything from melee strength and magical power to pure defense and dodging ability by adding dice to each respective pool. The treasure cards are held in a shared inventory and can be equipped once a player passes the necessary stat requirements, which also cost souls to improve.

It therefore becomes a see-saw game of chance where making it through to the main boss relies primarily on pulling the right treasure cards early and being able to level up towards those, or risk having to sink souls into drawing random items until something somewhat achievable is revealed.

With souls being in limited supply – the same amount is earned after every encounter, regardless of its difficulty level – this can be a frustrating situation where hours upon hours of playing are wasted on trying to find a half-decent set of armour, with the wasted souls from the shared pot meaning only one player may even progress past a starting loadout even multiple runs in. Any sense of reward from finally besting an encounter is quickly funneled away by the realisation that it likely won’t be enough to make it past the next one.

What’s most disappointing about Dark Souls: The Board Game is that despite the major gameplay missteps that make it an ultimately unenjoyable and unsatisfying experience, there are the buds of several smart and innovative ideas buried beneath the surface.

One of the smartest is the combination of health and stamina into a single bar on each player board, into which red and black cubes are placed from either end to reflect damage taken or exhaustion from more strenuous actions – if the entire bar fills, it’s death. The juggling of health (which only heals with certain items or spells) and energy (which restores gradually each turn) is a clever way to introduce more strategic decisions into each encounter – you could risk a more powerful blow to finish off an enemy this turn, but if the hit fails to kill them the spent stamina could mean your own demise. The bar completely refills at the end of each encounter, so every battle opens with the chance to start with a bang before slowly restricting the options available to characters on their last legs as health is depleted, lending a nice sense of fatigue to longer fights. 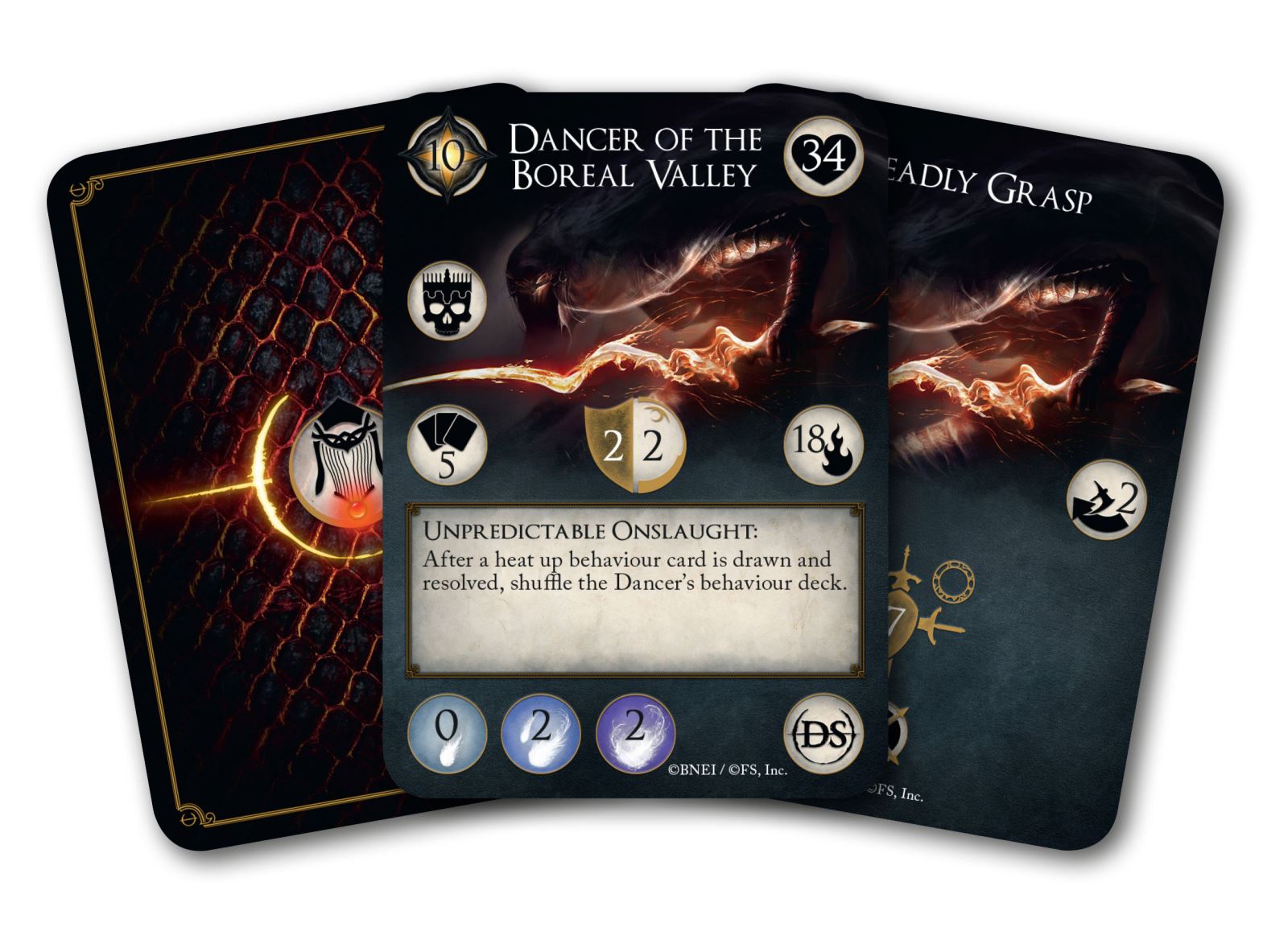 While the combat may not reflect Dark Souls’ preference for skill over luck, this is mitigated in the boss fights, which stand head and shoulders over the rather one-note behaviours of smaller sword fodder thanks to boss behaviour decks that aim to recreate the dynamic move sets of their virtual counterparts in a physical form.

Each card dictates the set of actions taken by the boss that turn, but the stack remains in the same order each time it’s reset, providing the chance for players to memorise the sequence and exploit it to fell the beasts, finally bringing the board game closer to the complex memory test setup of the video game. Once the bosses have taken enough damage, more powerful 'heat up' cards are shuffled into the mix, introducing new attacks and changing the flow of the fight for an exciting finale.

The bosses are the only enemies to make use of four arcs marked onto the models’ bases, signalling wider area-of-effect attacks and weaker portions that grant players the opportunity to deal bonus damage. The extra mechanics make the bosses easily the highlight of the game, if you can bear to grind your way through to them – though, honestly, it's a hard case to make.

While including similar behaviour decks and mechanics for every enemy big and small alike may have stretched the already baggy play time to an unbearable point (expect to take up to double or even triple the two hours suggested – sometimes just to reach the mid-boss), the difference they make is so staggering that it begs the question whether extra development in that area might have alleviated some of the many half-baked ideas that end up capturing Dark Souls at nothing more than a surface level. 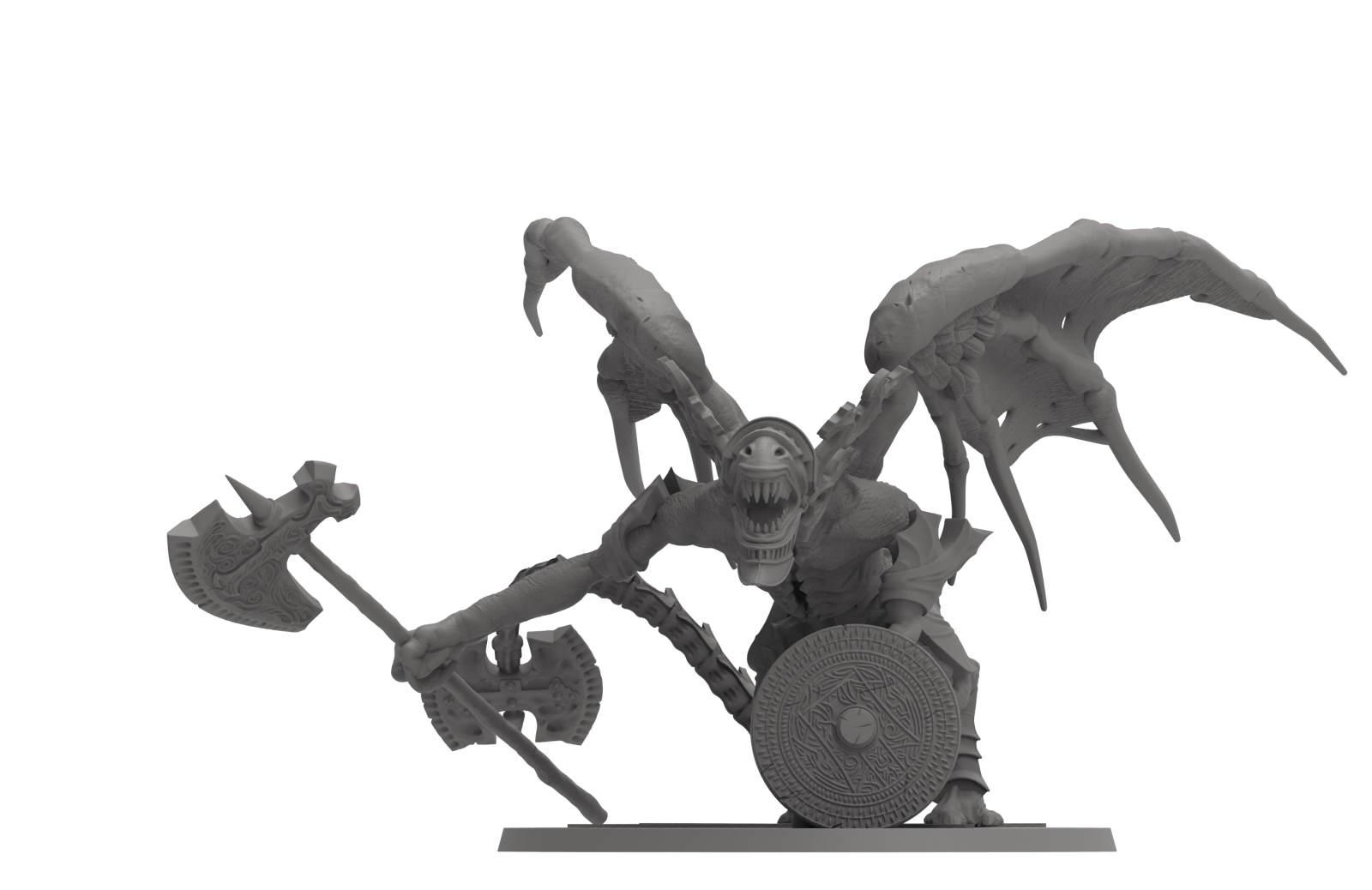 To that end, the miniatures do look fantastic. Sculpted from hard plastic – so they do risk snapping, as one of our DOA models attests, but maintain the striking poses perfectly – the four mini-bosses and two main bosses are suitably large, imposing figures on the tabletop.

While the bosses span all three games, the environment tiles stick with the drab stones of a castle-like setting, which feels like a missed opportunity given the forest, frozen and lava-filled levels visited during the games. This is particularly notably during the optional campaign mode, which adds the chance to play truncated versions of Dark Souls and Dark Souls III as series of connected scenarios – another case of something sounding well-considered in concept, but executed messily as it highlights the absence of environments, bosses and other elements from the two games, not to mention the gap left by leaving out middle chapter Dark Souls II.

Dark Souls: The Board Game appears to be the worst kind of adaptation: something that lazily tries to capture a popular creation in look without applying the care to embody its soul. That’s not the case, as there are enough factors that work as clever ideas but fail to come together in action. A better set of rules might have been able to take the fraying strands and create a coherent experience worthy of Dark Souls’ legacy. As it stands, though, you’re better off staying in the light.

It looks the part and there are innovative mechanics ticking away in the background, but Dark Souls fails to balance its reliance on tiresome grinding and frustrating dice rolls with meaningful decisions or rewarding gameplay. Still, the boss fights are a highlight – if you can even be bothered to get to them.