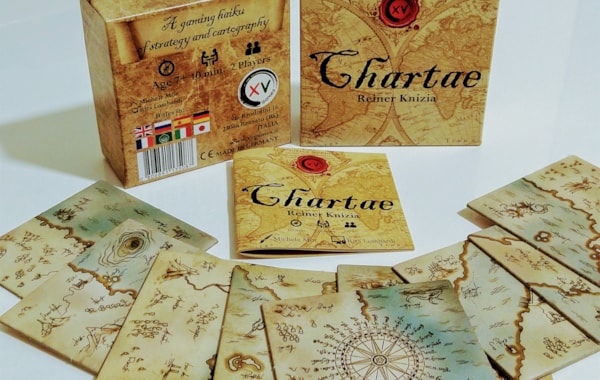 Chartae may not have the picturesque game board of Babylonia or the mountain of liquorish-coloured camels of Through the Desert, but despite its almost minuscule size, it still contains that Reiner Knizia signature gameplay: simple in execution, but delightfully brain-tickly.

In Chartae, players are cartographers arguing on how to plot the most accurate map of the land and sea. One of them, wants the sea to dominate, while the other one wants the land to do so. The map is composed of a three by three tile grid, which, once completed, signals the end of the game. Then the player whose terrain occupies the most connected tiles wins the game.

During their turn players can either add tiles to the grid or rotate those already in play. It may sound like there is not a lot of space for strategical manoeuvring, but for a ten-minute game, there are quite a few tactical decisions to be made. For example, adding a new tile brings the game closer to the end and has a risk element – you draw from the deck blindly – but gives you a level of control of how the map grows. Rotating a tile is a powerful move, but can be countered by the opponent on the next turn.

Chartae is the essence of the traditional Reiner Knizia gameplay, in pocket-sized packaging. While it does not lay claim to any new boundaries with its tile-laying gameplay, it is a delightful game that will make any ten spare minutes worthwhile.