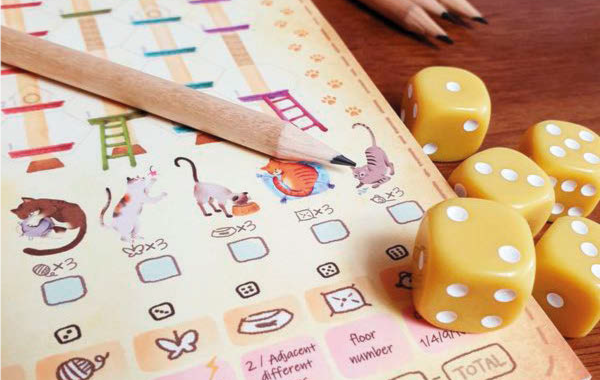 Roll-and-writes are the latest hot trend on the tabletop.

Buy your copy of Cat Café from us here.

Cats have been the hottest trend on the internet essentially since it was invented. Put them together and what have you got?

Something that’ll likely please fans of both to some degree, but surprise absolutely nobody.

Cat Café is a remake of Korean game Cat Tower, a title that hints more explicitly at its claw-shaped hook. You’re placing cat toys on the different levels of different cat towers (forming a prettied-up hex grid), scoring for each in a distinct way, whether it’s for different toys placed next to the food bowl or a connected chain of mice, for example. Two dice determine what you’ll place and which level of your chosen tower you’ll place it on. You’ll draft one die from the central pool, while the other is the cube left over after everyone’s picked. It’s a light but decent enough way of allowing for a smidge of player interaction and strategy, with enough manipulation of the roll results allowed through the resource of pawprints to avoid it being an out-and-out luckfest.

The option to draw the toys with cute little doodles adds to the charm, and the race to complete towers first to claim their points before opponents makes Cat Café less of an isolated multiplayer experience than some other roll-and-writes.

Let’s be real, though: if you’re here, you’re here for the cats. Cat Café is perfectly serviceable as a half-hour distraction, but it’s in the realm of Secret Santa or stocking filler presents for feline lovers (something its low price attests to, though it comes at the cost of shockingly low-quality dice), rather than being worth a play solely for the game itself. Even the cats don’t play as a big a role as we’d maybe have liked you’re drawing butterflies and bowls rather than Bengals and Birmans. But who are we kidding? It’ll probably go down like catnip anyway.

Buy your copy of Cat Café from us here.