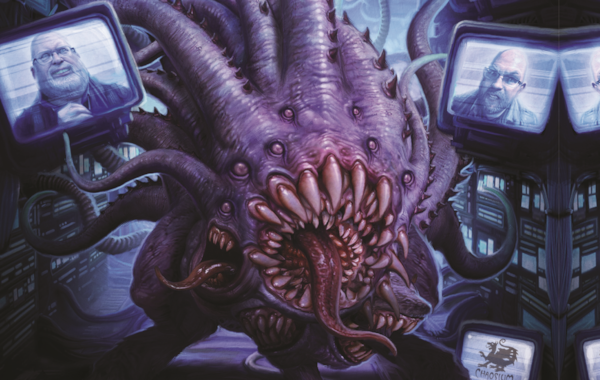 There’s a lot to love about one-shot adventures – self-contained, snack-sized selections of gaming that require little in the way of preparation or commitment – and Petersen’s Abominations showcases an excellent little collection assembled by one of the original driving forces behind Call of Cthulhu.

Unlike the traditional 1920s setting that the game usually adopts, the book is firmly rooted in the modern day. This is used to put neat little twists on the usual Lovecraftian tropes and create ghoulish scenarios where biotech firms experiment with foul mutations and gangland bosses look to harness eldritch powers.

There are five such scenarios contained within the book, all of which should be enough to keep a group entertained and horrified in equal measure for a session or two. Indeed, each of them was adapted from a set of scrappy notes that designer Sandy Petersen used to run convention games, and this origin has heavily influenced their structure.

For example, each opens with a neat little contrivance that propels the investigators into the heart of the Lovecraftian mystery within a matter of minutes, such as having a house party they’re attending take a turn for the weird when the host breaks out a brand new set of claws. While this can make it tough to work them into an ongoing campaign, it’s perfect for the sort of games the book is designed for and gets players invested right out of the blocks.

Having said that, though the adventures are fairly short that doesn’t mean that they’re simple or straightforward. The opening scenario, which involves a gate to Hell opening beneath an isolated hotel, is a particularly complex affair that needs the GM to be incredibly comfortable with the material if the party is going to have a good time.

If you’re able to put in the time and effort needed to prepare, however, you’ll find that Petersen’s Abominations is a great way to introduce new players to the world of Lovecraftian horror. Just remember that this is a Call of Cthulhu book and retains its traditional degree of deadliness, so you should probably warn them not to get too attached to their characters...

Bite-sized investigations, with a creepy modern feel dripping with imagination and blood in equal measure.