Whenever an existing game gets a roll-and-write version, the latter is usually, simpler, faster, more compact version of the original. That is not the case with Biblios: Quill and Parchment, a follow-up to the card drafting game Biblios. Quill and Parchment is by no means a complicated or a long game, however it doesn’t simply re-design the elements of the original to fit the roll-and-write format, instead it re-imagines its core themes and main mechanics to make it more appropriate to its reincarnation in this genre. In the end you get a game that is a spiritual successor to Biblios, but also doesn’t copy it, offering something to old and new players alike.

In Biblios: Quill and Parchment you are still living your best monastic life – copying books, praying in the chapel, or sending your novice on errands to town. Each of these actions correspond to a particular track on a laminated card, progressing along which will earn you victory points at the end of the game. If you copy the most books of a certain type, you gain points. The value of each book types can also be changed during the game (similarly to how it worked in Biblios). If you progress further into the chapel, you earn points. If your novice visits a town, you get points. If you fill in a spot on the cross, you get points. Well, you get the idea.

Players actions are determined by a dice roll, although there is a generous re-roll mechanic that helps to mitigate excessive luck elements. However, no matter what your roll, there is always something to do, the re-rolling is only for the chance to improve the result.

Just like in Biblios, halfway through play Quill and Parchment changes. The second part is less about rolling and choosing actions, but more about bidding on and drafting dice. You use the influence points accumulated through the first four rounds of the game to bid on a set of dice you want to collect. There is a nice tug of war between wanting to keep your influence (it still earns victory points at the end of the game) and wanting to bid high to ensure you get the dice you want.  Of course, you will need to pay attention to what your opponents are doing throughout the whole game to ensure you are winning the majorities on tracks that are worth the most points.

Biblios: Quill and Parchment’s boards deserve a special mention as probably one of the best designed roll-and-write boards. Every element of the game has its own special area. The layout is so well-structured that you can track every single development of the game on the board. There is never any confusion on what to do next or how to calculate a particular step in the game because everything is clearly explained and illustrated. The board is so good, it makes the rulebook almost obsolete.

Biblios has such a high standing, it is hard to imagine any of its sequel being able to hold a candle to its success, but Quill and Parchment does it, and perhaps even exceeds it. It is thematically richer (even though the game is still quite abstract): your actions correspond to activities of the monks and the artwork on the boards does a good job illustrating it. The gameplay remains quick, high-paced, but also exceedingly clever getting the balance of luck and player agency just right. It looks good too, from the excellently laid out board to the wooden dice. It doesn’t matter if you haven’t played Biblios before, you shouldn’t sleep too long on Quill and Parchment. 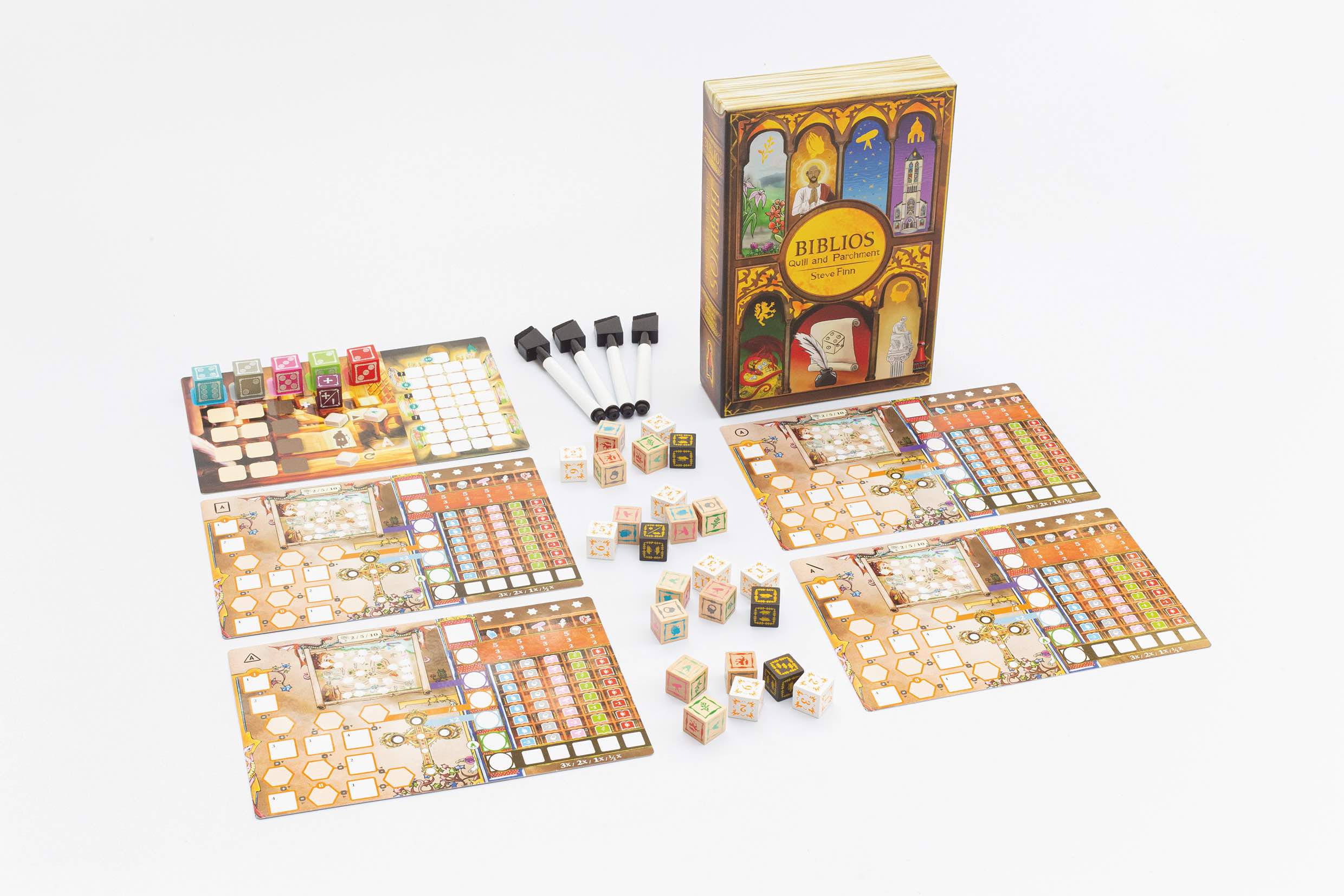 A roll-and-write re-incarnation of the original Biblios, Quill and Parchment doesn’t simply copy what the original does best but improves on every aspect of it.

TRY THIS IF YOU LIKED BIBLIOS

Simple, yet elegant gameplay makes card drafting Biblios one of the best ‘filler’ games and its roll-and-write sequel Quill and Parchment confidently follows in its footsteps.