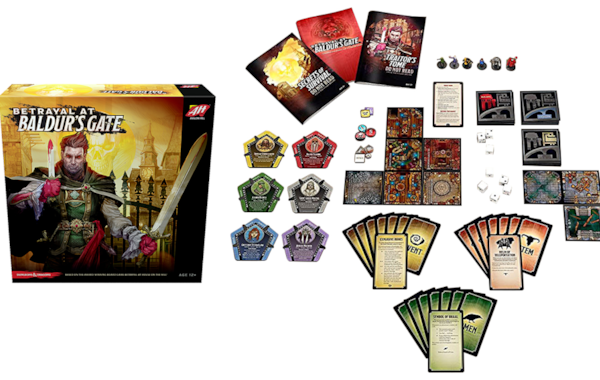 The horror hit swaps ghouls and ghosts for Dungeons & Dragons

Betrayal at House on the Hill is the tabletop equivalent of a horror B-movie; often inconsistent in gameplay, pacing and tone, its haunts where one player is revealed as a surprise traitor and turns against their former companions are an acquired taste best enjoyed for their silly fun and schlocky self-awareness rather than earnestly.

In many ways, the original game’s exploration of a haunted manor – complete with one-off events and items – was reminiscent of a lighthearted Dungeons & Dragons campaign where the DM and scenario are only decided once the ectoplasm hits the fan.

Betrayal at Baldur’s Gate takes the natural step of relocating Betrayal to the streets, shops and catacombs of D&D’s iconic city, recasting its paranormal investigators as adventurers doing battle against some of the storied RPG’s various creatures.

To fit with the now explicit roleplaying inspiration, Betrayal’s mechanics have been evolved with some notable changes. Not least is the addition of powers to its cast of 12 selectable characters, who hit all of the D&D tropes you’d hope for – you can even cast Magic Missile.

A few of the background mechanics have been tweaked, too, in an effort to lessen some of the divisive balance issues often derided by Betrayal’s detractors. Biggest of all is a rethinking of the way that haunts are activated – instead of rolling six dice (with 0, 1 and 2 results) and triggering a haunt when the total is lower than the number of revealed omen cards, players now roll a number of dice equal to the number of omens in play and only begin the haunt once they roll a six or higher. It means that setting off a haunt prematurely while the players are still gathering items and revealing the map is far less likely, but it does detract from the tension somewhat by negating the first couple of rolls – although there’s nothing stopping you playing by the old rules.

The components – another one of Betrayal’s weak spots – have likewise been improved. The dreaded stat clips do make a return, but have been subtly altered to stop them sliding straight off the edge of character cards – easily one of the original game’s most frustrating aspects. The pre-painted character miniatures won’t win any painting competitions, but for the modest price of entry the decoration does more than enough to bring the world to life.

There are another 50 haunts here, and they’re as hit-and-miss as in the first Betrayal. A few fall flat with combat-heavy dice fests and iffy writing, but there’s plenty of fun to be had in the mix as you run around and enjoy lighthearted spins on classic D&D themes – although it has to be said the outside setting with its incongruous mix of buildings, alleys and underground tunnels lacks the claustrophobic panic of being trapped in a haunted house with a potential murderer.

Perhaps the biggest shame about Baldur’s Gate is that the presentation sticks too closely to the half-and-half nature of its title. It feels like there’s a missed opportunity in keeping characters’ traits the same as those in Betrayal (speed, might, sanity and intelligence) rather than simply swapping them for D&D’s iconic character attributes of DEX, STR, CON and INT. Despite D&D-specific details and images, the general event, item and omen card icons remain untouched, with the Traitor’s Tome and Secrets of Survival books also sticking to their Betrayal roots – would it have been too much to ask for a fun play on the Player’s Handbook and Dungeon Master’s Guide?

Still, what is here is still fun enough if you’ve explored every corner of Betrayal and its expansion – or you’re a D&D fan looking for a fast and amusing reimagining of the roleplaying universe. At the very least, those new clips are almost worth it alone.

The D&D redressing doesn’t go as far as it could, but the improvements made to Betrayal’s often inconsistent gameplay and components are very welcome – and there’s still lots of laughs in store.