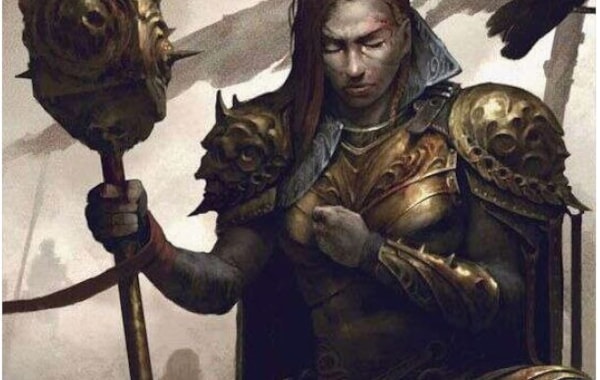 Wrapping your head around Band of Blades isn’t the easiest thing. At first glance it looks like yet another dark fantasy RPG with a couple of neat ideas, but once you get it to the table you realise that the twists and turns just keep coming until you’re spiralling into an entirely new kind of game altogether – one that ditches the soft edges of the sandbox in favour of razor-sharp storytelling.

The first of these quirks is the fact that Band of Blades neatly straddles the line between game system and campaign. Every time you kick off a campaign, you’re going to playing out the same rough scenario – the desperate retreat of The Legion in the face of an undead horde led by warped divine warriors.

This doesn’t mean that every game is going to be exactly the same, of course. Different tables will make different choices, dream up different characters and play events out in different ways, but the general goals and themes are always going to be the same. While it may seem a little limiting, this narrow focus allows every aspect of the game to work together in a way that simply wouldn’t work if things were fully freeform.

For example, the simple fact that you’re always playing as The Legion rather than the traditional party of wandering adventurers means that you’ll always have a broad cast of characters to play around with. This is important because in Band of Blades you don’t just play as just one hero, but rather The Legion as a whole. Kind of.

There’s likely to be a small group of specialist fighters who function as the main characters, but over the course of a campaign the players will probably jump into the shoes of a half-dozen other legionnaires as missions (and drama) demand. On top of this every player takes the role of one of the Legion’s top officers, who don’t go head into the field at all, instead overseeing things like supplies, intelligence and mission selection from the relative safety of the camp.

This can be a confusing concept to grasp, and one that requires every player to be comfortable with multiple roles, but when it clicks into place it creates something rather wonderful. Between the ensemble cast, shifting perspectives and episodic structure Band of Blades campaigns feel like they could be directly pulled from slick TV series like Battlestar Galactica or Game of Thrones.

This is only heightened by the rulebook’s almost fanatical devotion to cutting out any moment that isn’t exciting or relevant to the plot. If a session’s primary mission involves raiding an occupied village for supplies of black powder, the squad’s travel and initial approach are covered with a quick ‘engagement roll’ and the actual action picks up as they first engage with the garrison of gloomy, crow-masked monsters.

When those moments of conflict do arrive whether they come in the form of a fight, an attempt to sneak past sentries or smash down a poorly-guarded door they’re all handled by the same core mechanic used in other Forged in the Dark games, such as Blades in the Dark. At a base level this is a simple check involving a handful of d6s and a conversation with the GM about what the consequences might be, but there’s a lot of details floating around that can make things surprisingly complicated.

Judging a single roll requires you to consider whether the character’s position is controlled, risky or desperate, whether they have potency, what their scale is relative to the task and the threat of any foes. None of the individual parts are too hard to handle, but there’s a lot of systems to keep track of and the rulebook doesn’t do a great job of neatly presenting its ideas.

Checking the rules on making a slightly complicated check may send you hopping across entries separated by hundreds of pages of text, which is far from ideal in a game where pacing is so key. After a while the factors involved become second nature, but the GM’s first few steps into the game feel more complicated that they really should be.

Once you do get rolling, however, there really is something special about Band of Blades. Where so many games can be described as “like X but…” it stands entirely alone, sharp as a knife and dark as gunpowder. Its limited scope can be a little off-putting to those who want just one system to play for years at a time, but if you want something built with a single, sublime goal in mind you need to getyour hands on this book.