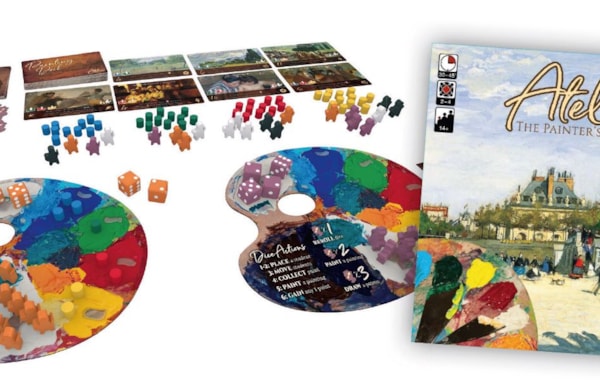 A game that makes a good impression

We’re in the late 19th century, in the midst of one of the greatest outpourings of art in history – the Impressionists, the Post-Impressionists, the Romantics and others. In Atelier you’re not one of them. Instead you’re running a studio of artists, competing against other studios to produce a steady volume of paintings, as well as masterpieces to win patrons and reputation.

Publisher AEG has gone to town on the presentation of Atelier. Collecting the paintings is the goal of the game and each one is beautifully reproduced on a tarot-sized card in a way that lets the classic art breathe. The player boards are artists’ palettes – not simple white cards like the ones in Bob Ross: Art of Chill, but handsome tools that look the part but are also beautifully functional.

On the other hand the meeples that represent your art students are… there’s no two ways about this, they’re priapic and bootylicious. Obviously they’re meant to be  holding a palette and brush, but unfortunately their silhouette suggests something rather cruder.

Each turn you roll and draft four dice, and the results let you deploy or move students, collect paint, or spend paint to complete a painting. Each painting has a unique power which gives you boosted or additional abilities, plus you can burn dice to get inspiration tokens, which you can spend for later re-rolls, paintings or even new patron cards, which give victory-point bonuses.

Ultimately and inevitably it’s all about VPs, which come from your paintings. There are four schools of painting, which affect the game less than you’d think; you’re not collecting sets, you mostly build your collection based on what your patron wants, what paint you have and what powers and VPs the card carries. There’s no reward for cornering the market for Monets.

The gameplay is clever and intricate, it’s well-balanced and paced, though in the end it’s not tremendously tactical. It’s difficult to work out what paintings another player is likely to go for, or to block them. The students tussling for paint is amusing but the game makes it easy to bypass that whole process. The paintings’ abilities feel like they ought to come together for a kind of engine building system but it never gels.

Despite all that, despite all the misgivings, it’s fundamentally nice. The whole thing is pleasant and satisfying to play, and building your collection of classic art is lovely. It’s somewhere between dice drafting, worker placement and engine-building. If you want a full-on worker-placement game about art then you should go for Fresco, if you want heavy player interaction and dominating the art market then Modern Art is your game, but Atelier occupies a space somewhere in the middle, and seems comfortable there.

Atelier is a keeper, which for a games reviewer with limited storage and a collection that started in the 1980s is high praise. It’s not one of the finest games I’ve played, it doesn’t dazzle with originality – I wouldn’t even use the word ‘great’ about it – but there’s something in the box that I want to experience and share again. Even though the mechanics never quite capture it, the art world of the late 19th century is a charming and attractive place to spend an hour.